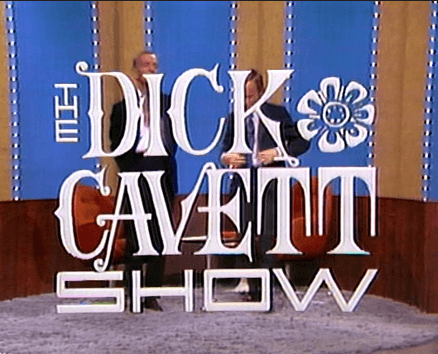 Perhaps more than any national TV talk show host of his generation, Nebraska native Dick Cavett incisively discussed the 1960s-1970s cultural maelstrom. He applied his intellectual yet Everyman dry wit to touchstone social issues and showbiz icons ranging from the politics of Karl Marx to the comedy of Groucho Marx.

His body of work that era is a trove for cultural scholars in the digital age since he delved into things that continue to haunt and fascinate us today. He was ahead of his contemporaries dealing with Watergate. Excerpts from the shows he did on that scandal became the basis for the documentary Dick Cavett’s Watergate by Robert Bader, who tapped shows about Vietnam for the followup Dick Cavett’s Vietnam. Now Bader examines that era’s major intersectional emblem, Muhammad Ali, in the new film, Ali & Cavett: The Tale of the Tapes.

“He did come around at a time made for him,” Cavett said of Ali, whose life touched civil rights, black power. Vietnam and mass media fame.

The Black Muslim boxer from the South and the WASP host from the Great Plains became close off-camera.

“We were a strange pair as friends,” said Cavett.

Across his many talk shows, the Emmy Award-winning Cavett had Ali on as a guest nearly 20 times.

“There were times when I thought he was my best friend. He once stayed at my house in Montauk while doing a documentary of some sort. I said. ‘Where are you staying while you’re here?’ and he said a motel, and I said, half jokingly, ‘Well, you don’t want to stay at a motel, why don’t you stay at my place.’ And Ali said, ‘Oh, my mother would never believe I stayed at Dick Cavett’s house.’ So he did.

“I put him in the big bedroom. I went to get his wife at the motel. While I was gone and he relaxed in the room, the phone rang. It was my then-wife, the late Carrie Nye. She started, ‘Darling …’ and Ali interrupted, ‘This ain’t darling. I’m the only three-time heavyweight champion in the world and I’m lying in your bed and I’m watching your TV.’ She was able to recover quickly to say, ‘Oh, Mr. Ali, I’ll have a plaque put on that bed for sure.’

“Which is more than she ever did for me. That’s a joke.”

Cavett is excited about the film, which premiered at festivals and is slated for an HBO run.

“It’s a terrific film. It has Ali when he first became famous up through things like the idiot boxing commission taking his title away (after Ali refused military service on religious grounds). There’s a lot of funny stuff, too.”

One of the funniest bits came when Ali and nemesis Joe Frazier did the show together.

“They entered down the two aisles. At one point during the sit-down, Ali said to Frazier, ‘Let’s be friends for one minute, just to get him,” pointing at me. Ali picked me up on my right side and Frazier picked me up on my left side. They held me there squeezed between them with my feet two feet off the ground. A huge laugh, of course. After they put me down I heard myself say, “I saw that up on the screen – it looked like a giant Oreo cookie.’

They feigned offense. Ali choked me once or twice.

When Ali appeared after losing to Ken Norton – getting his jaw broken in the process – his usual exuberant persona was nowhere to be seen.

“He was dragging himself out onto the stage. He was very down. He said, ‘Dick, I’m just an old broke-down fighter with a wired jaw and nobody asked me or invited me on their shows except you. You’re my main man.’ I didn’t know the significance of the expression main man until people explained it to me. Seeing him subdued like that was very unusual. On his other visits he was funny and animated like a string of firecrackers going off.”

The rich cultural gallery Cavett covered extended from Ali to John Lennon to John Neihardt to Jimmy Hoffa  and from Vietnam to Haight Ashbury to Watergate.

“I came on just in time for about five assassinations in a row. Two days after Bobby Kennedy was shot I put together a panel show to discuss it. There was my old philosophy professor (Paul Weiss), actress Lauren Bacall and journalist Pete Hamill. I remember Bacall uttering the line, ‘Why doesn’t anybody ever shoot any right-wingers?’ The network was disturbed about that – like it was some kind of dare.

“Oh, God, pretty interesting times. As in what do you do with a president that should be wearing striped pajamas in Richard Nixon’s case.”

The entertainer’s “loaded” liberal shows made him a target of the paranoid commander in chief, who, in Nixon’s own recorded words, sought to “screw” Cavett.

“In Cavett’s Watergate there’s a moment when the screen is filled with nothing but things Nixon said at various times – and it took me three viewings – but down in the right hand corner it says, “Is Cavett a Jew?” That was a big question with him.”

Though years removed from a regular talk-show gig, Cavett’s humorous observations find expression in his New York Times column and books. The former gag writer for Jack Paar, Merv Griffin and Johnny Carson said he feels he should identify more as a writer but added, “I have no discipline. i seem to have to have an assignment before I do anything.”

His sensibilities made him a natural to interview fellow Nebraska satirist Alexander Payne at the Tribeca Film Festival last spring.

Cavett was back here only last fall but he rues it’s “been some years now” since he last visited his beloved Sand Hills. “I used to manage to get there at least every year or every other year. There really is nothing like them. Sometimes when I’m there alone I will stop the car when there’s no other traffic and I’ll get out and just listen to the silence. You realize how long it’s been seen you’ve heard real, real silence.”

Coming home, he said, is “a mixed blessing because life goes on and then doesn’t for many of the people you knew,” adding, “You keep being reminded of the shortness of life and how many friends are, as the cliche goes, pushing up daisies.”

His secret? “Optimism.” Elusive when he suffered from depression, but the shadows of that illness have long  lifted. He’s remarried, fit and still a relevant sage at 81.

“Optimism is something you have to go find.”