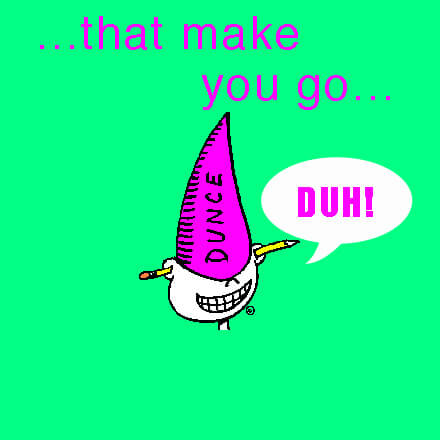 There is no dearth of stupid human tricks. We are at once our own worst enemies and defilers of Planet Earth. It’s just the way it is. Maybe it goes back to the mythical “Garden of Eden.” To wit, when you violate instructions and eat of the Tree of Knowledge, you think you know it all. However it happened, human hubris is a trademark of our species. And it may be the terminal pathology as well. A small sampling of the evidence, garnered from recent news items, follows.

Cellphone radiation. Only something as obviously distracting, copiously unnatural and definitively ubiquitous as automatons walking, sitting, driving, dining while lost in the pixels of cellphone intoxication could serve as the synecdoche of our troubles as a species. The electromagnetic radiant energy and radio frequency emissions we bathe our bodies in have come under scrutiny once again. A new study presented to the Federal Communications Commission demonstrates a link between brain cancer and heart cancer in laboratory experiments. Now, this is nothing new. As far back as 1993, industry-backed research by Dr. George Carlo raised a red flag regarding the danger of cellphone radiation and its link to cancers. Various international studies have linked cellphone radiation to cancer. Yet we continue to hold these cancer-related devices tight against our ears and stuff them in the crotch of our jeans. Indeed, it’s our genes we should worry about. But, as noted, cellphone electromagnetic radiation (EMR) exposure is just the tip of the iceberg when it comes to mankind’s meddling. Duh!

Antacid drugs and heart disease. Sitting at the defunct M’s Pub one day a couple years ago, I enjoyed entertaining a friend just in from Los Angeles with a hearty lamburger lunch. Our post-prandial bliss became rushed when my friend announced he had to get to a Walgreen’s to fill a prescription for Nexium. “A heartburn medicine? How come?” I asked. Seems he was planning to attend a holiday feast. “I’ll be gorging on a late supper of prime rib and all the trimmings and that always gives me heartburn, so I take a little purple pill and I can eat as much as I want.” And that, my friends, is crazy. Visions of Roman gluttony and the legendary vomitoria invaded my mind. Millions of Americans take a proton pump inhibitor drug (PPI) that alters the production of stomach acid, a chemical process vital to digestion. When we overeat or eat the wrong food, excess acid may be produced and cause temporary discomfort. But rather than adjust their dining habits and cravings, Americans would rather indulge and then control the acid reflux with a drug so powerful that it stops a natural bodily process in its tracks. Well, again we find that it’s not nice to fool with Mother Nature. In a recent study, PPIs have been found to damage blood vessels and lead to heart disease. Consider: 1) Adjusting eating habits is an easy fix to heartburn; 2) Drug companies make a fortune obscuring the dangers of the drugs they sell; 3) Real evidence is mounting that those drugs harm you. So, duh!

RoundUp for breakfast. Various studies are finding the world’s most popular poison everywhere. Glyphosate (the active ingredient in Monsanto’s RoundUp) is in our pee, in mother’s milk, in our city parks and even in our breakfast cereal. Anyone who thinks a powerful poison is innocuous when it enters the body has to be living in lala-land. And it’s starting to hurt us in the pocketbook, too. Countries are turning back shipments of American food products because they are polluted with the poison. Again, the glyphosate problem is but a bellwether of our human predicament. There are over 55 million chemicals registered. About 90,000 are used in everyday commerce and of those, about 900 have been tested for carcinogenic properties. Fifty-five million chemicals, 900 tested. We use too many chemicals, period. And we know virtually nothing about their safety. Who’s driving this bus? Duh!

Skin trade. Another research study has found that the application of deodorants and antiperspirants significantly disrupts the natural bacterial population of the skin. Our personal microbiome, both external and internal, is essential to health. Only in the past couple of years has mainstream media and academia become aware of this fact. The Obama Administration announced a new program that will study the microbiome that is the substrate of all life on earth. It’s not just on our skin, in our guts, but also in the soil, plants, animals — everywhere there is life itself. Now, at first, I thought “Yeah, finally. Looking into the microbiome.” Then I read one of the goals of the project: “…a unified microbiome initiative to understand and responsibly harness the activities of microbial communities.” Ah, yes, “… responsibly harness…” Ain’t that always the way? Humans want to harness nature in order to — what? Yep, monetize it and manipulate it. Knowledge given is one thing. Knowledge taken against higher advice is another thing all together. It just makes you wanna say, “Duh!”