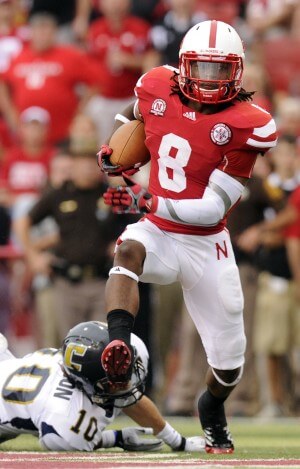 Jamal Turner had a feeling Ameer Abdullah would get in the end zone before the night was done.

And that feeling was reinforced by Abdullah.

Or so Turner says.

Prior to Nebraska’s 42-29 victory against Fresno State, Adbullah “actually told me, ‘I’m going to score one today,’” Turner said Monday. “I was like, ‘All right, man, go out and do it.’ I kind of slapped him on the butt, and he actually scored. I mean, he’s a good player.”

Both are good players. And both are true freshmen, among five who have played for Nebraska in the first two games. All five are on offense. Plus, Abdullah has returned kicks.

Fresno State had just cut the deficit to 28-26 on a 26-yard touchdown pass early in the fourth quarter. Clearly, the 5-foot-9, 180-pound running back has a sense of the dramatic, as well as speed.

“It couldn’t have come at a bigger moment,” said Husker special teams coach John Papuchis. “That was a momentum changer, and that’s one of our goals every week on special teams, is to gain or change momentum of the football game.”

As did Turner, Papuchis sensed such a return by Abdullah. “Ameer’s an electric guy,” Papuchis said. “Give him enough opportunities and he’s going to break one. I kind of felt like he was on the verge of breaking one either on punt return or kickoff return the last two games.”

In the opening game against Tennessee-Chattanooga, Abdullah returned five punts, the longest of the returns 28 yards. He also fumbled away a punt when he collided with teammate P.J. Smith. Even though Smith was “nudged” into him, “I felt like I was in the wrong,” said Abdullah, who was named the Big Ten Special Teams Player of the Week for the Fresno State performance.

Freshmen are likely to make mistakes. But “electric” talent can offset occasional miscues.

Abdullah’s 100-yard kickoff return was just the fourth in school history, and the second-longest. His 211 total yards on five kickoff returns were a school record.

“He’s a quiet guy, but once you get to know him, he’ll talk to you and you’ll love him to death, really funny, really caring,” Turner said. “He’s really a good person. He’s a good friend of mine, a really good, best-friend level guy. So I can talk to him if I needed to.”

Abdullah also is “a humble person,” said Turner. “He doesn’t talk much. He’s one of those people who are going to go out and do it. He’s going to show you with his athleticism.”

Though “electrifying” isn’t usually used to describe an offensive tackle, Tyler Moore is a talented and athletic true freshman as well, the first to start a season-opener in the Husker offensive line since the NCAA restored freshman eligibility in 1972.

Turner, Heard, Green and Bell, along with junior Tim Marlowe, are among those who competed for kickoff- and punt-return jobs during spring practice and fall camp. “Pretty much anybody back there can do it,” Abdullah said after the opener. But “there can only be one person back there at a time.”

Marlowe dropped back on one punt early in the second half against Fresno State. However, Abdullah is No. 1 on punts as well as kickoffs for now. And the 100-yarder showed why.

“I wasn’t surprised,” Turner said after the Fresno State game. “He does it all the time at practice. I knew he was going to take one back today. I was just waiting on the moment.”

The moment couldn’t have been better. Abdullah has a sense of the dramatic, too.