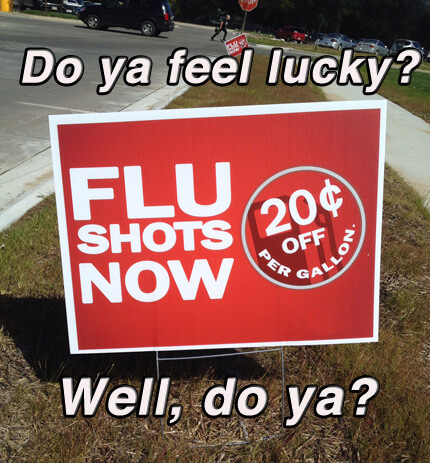 Each autumn we start hearing tales of employees being either peer-pressured or mandated to get jabbed with an ineffective and dangerous vaccine. You know, if I weren’t such a mellow guy who meditates twice a day, seeing all these “Get Your Flu Shot” signs would really piss me off. That indelicate and crass declaration aside, it’s time to look at the insane notion of buying into the media/corporate/government/Big Pharma hype of the seasonal flu vaccine.

Cut to the chase. Just look at the problems surrounding the flu vaccine: 1) It’s ineffective. It does not protect you from getting the flu. 2) It’s dangerous. 3) Look at who is pushing you to get shot: Grocery stores, pharmacies, drug companies and government agencies. Do you have any reason to trust any of them with your health? Seriously. 4) Influenza is rarely serious. 5) The media, government, Big Pharma and the mainstream medical establishment use false and inflated statistics to cudgel the populace into buying the flu jab. 6) In a common-sense theoretical way, the flu vaccine doesn’t even make sense.

Ineffective vaccine. Especially for kids. Save your email stamps, antagonists. I’m not a knee-jerk anti-vaxxer, per se. But when it comes to the flu vaccine, the data are clear. It’s ineffective. Independent, non-aligned, qualified researchers have done copious studies that confirm that fact. To cite just one, the European-based Cochrane Report studies hundreds of research articles in metadata reviews. Dr. Tom Jefferson, head of the research on flu vaccine pointed out that maybe, just maybe, the flu vaccine keeps one person out of 100 vaccinated from getting the flu. That alone could be a statistical anomaly. Since the US and Canada have begun pushing for vaccinating infants, the Cochrane group went even further and investigated flu research on children. Published in the peer-reviewed journal Lancet, it concluded “We recorded no convincing evidence that vaccines can reduce mortality, hospital admissions, serious complications and community transmission of influenza.”

Even the Centers for Disease Control agree. Flu shot is virtually ineffective. The CDC maintains a database showing flu vaccine effectiveness. Even using their skewed metrics, in 2004, it was only 10 percent effective! Last season it was 23 percent effective. Think that over. It works only for 1 out of ten people! Or sometimes one out of five. There are other years noted where it is somewhat higher, but over 10 years, averaged less than four out of ten, that’s less than half the time. The CDC’s own admission. Let’s put it like this: the flu vaccine, according to the CDC, usually does NOT work. How can that be scientific evidence?

The situation is worse for children under two. The Cochrane Report was unable to find any research showing the flu vaccine protects infants. Dr. Jefferson said, “We just cannot understand how you can vaccinate millions of small children in the absence of convincing scientific evidence that the vaccines make any difference.” And in regard to the CDC, Jefferson said, “The CDC, which should have a neutral public health role, is in fact a vaccine advocate, with all the good and bad things that that entails.

If that isn’t enough to convince you of the ineffectiveness of the flu vaccine, try this: The former Chief Vaccine Officer at the FDA, John A. Morris, M.D., once stated: “There is no evidence that any influenza vaccine thus far developed is effective in preventing or mitigating any attack of influenza.” They fired him.

Danger Poke So, you say, “Okay, so it only works 20 percent of the time. What the heck, it can’t hurt to get the shot.” Wrong, it can. First, the chances are unlikely that you’ll get the flu if you don’t get the shot. Even less likely that you’ll have any complications from getting the flu, outside a day or two of rest. But if you do get the shot, you face potentially deadly side effects. In the words of Dirty Harry, “You’ve gotta ask yourself one question: ‘Do I feel lucky?’ Well, do ya?” If you get the shot, aside from annoyances like soreness, getting the flu from the shot, contracting Guillain-Barre paralysis, brain swelling and death are real possibilities. And if you are harmed by the vaccine (or any vaccine, for that matter,) the Big Pharma lobbyists have made sure you can’t even sue the manufacturer. They got the Feds to pass a law saying you can’t sue ‘em. Big Pharma has carte blanche put whatever they like in the injectable cocktail and do so with impunity.

Flu rarely dangerous. Even the CDC is backing off those spurious claims that “36,000 people die each year from flu.” You’ll see that number bandied about in the media all the time. It’s total BS. 36,000? Try 18! That’s eighteen. That’s a typical number of confirmed cases of death by influenza each year. A few years it gets bad and a couple hundred may die. Now, each death is tragic but to inflate those numbers by a factor of 2000 just to sell drugs is downright criminal. In view of all this, buying into the hype of the hypo seems like another case of that more dangerous disease, consumeritis Americanis.

For details on the research cited above, visit HeartlandHealing.com/flu