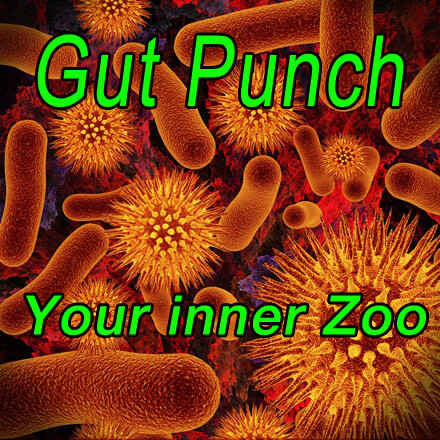 One of my favorite moments from just a couple years ago was when a local med school student called in to a radio show I was guesting on. The show’s hosts, Dr. Shawn Schmidt and the late Don Vassos, and I were discussing real food and the role of digestion in health. Shortly before they opened the phones up for listener questions and comments, I offered the fact that non-human cells in our body outnumber the human cells by a factor of ten-to-one. Most of that majority was due to the presence of trillions of microbes throughout the body with the greatest amount of those bacteria and other flora living in the gut.

Anyone who’s heard the term “probiotic” likely understands that our guts are filled with a ginormous number of helpful and some pathogenic bacteria, performing all sorts of life-affirming services. Indeed, without our microscopic friends, we’d be dead. The first caller to the radio show apparently hadn’t learned that fact. He was a medical student at — coincidentally — my alma mater.

“You’re so full of it, I can’t believe it,” he exploded. “You’re quacks and don’t know what you’re talking about. The human body is made up of human cells. I’m a medical student and you shouldn’t be on the air broadcasting this tripe to the public.”

Well, I hope by now our caller friend is pumping gas at the corner or running for President because he couldn’t have been more ignorant of reality.

Numbering bugs. Since the mid-1970s and a study by a microbiologist named Thomas Luckey that pegged the number of microbes in the human gut at 100 trillion and a consequent mashup with the number of human cells in the body estimated at 10 trillion by microbiologist Dwayne Savage, we got the commonly known figure of 10:1, microbes v. human cells. Commonly known, of course, except by our med student caller.

That 10:1 ratio floated around for about 35 years. It just didn’t float around the head of our med student friend. But I won’t use that ratio again without a nota bene. The latest estimate (admittedly of something that will never be proven) is that there are about 30 trillion human cells in the body and about 40 trillion microbial ones. So, like biological gerrymandering, the numbers have become more equitable. Still, the point is clear: Bacteria and such outnumber our human cells and are in our body for a natural reason.

Mother’s milk and more. Our first dose of good bacteria comes when we slide through the birth canal. Eyes, ears, nose, mouth, skin… all get a good inoculation from mom. Sadly, a caesarean section delivery sidetracks that opportunity. To summarize: vaginal birth good, C-section bad; when it comes to starting off with the right biome.

Biome metrics. Ow. I get a twinge when I pen that pun. “Biometrics” is the name of the course that was the coup de grâce when I was in college. I switched to English major after that. Until my draft papers came.

Microbiome or microbiota are terms we call the metropolis of microbes living in our gut on any given day. Those bacteria serve a variety of functions vital to our wellbeing. These symbiotic buggers make digestive enzymes that we can’t. Those enzymes help us digest food. Our microbial zoo also make our human intestinal wall cells “do the right thing” by stimulating them to differentiate properly, thus protecting the integrity of our intestinal walls. By sheer numbers, the “good” bacteria in our gut out-compete any “bad” or pathogenic bacteria. For bacteria to live in the gut, they have to be able to colonize the intestinal walls during their stay and when we have a “full house,” so to speak, bad bugs are pooped away.

Immune system. Microbiologists call our trillions of bacteria our “largest immune system organ.” The bacteria that enter the body the moment we are born begin a complex process of modulating the crucial functions of our intricate immune system. Think of the body’s immune system as a vast and complicated communication network that involves nearly every function of the body. The initial bacteria actually are teachers, instructors to the body on how to operate and naturally, since the bacteria want to survive, they program that early immune system to be nice to the first biome. That’s why it’s so important that the early symbiotic settlers are those introduced by mother’s milk. An immigration of friendlies from mom sets the tone for the immune system as it matures. Since the immune system is the first responder to allergens and can rapidly disable a body when triggered, the initial biome helps diminish those effects, commonly known as allergies. A well-balanced biome means fewer allergies. In toto, a healthy microbiota of friendly bacteria is vital in every way. With breast feeding, we get a head start. After that, it’s up to us to avoid anything that upsets that microbiome.

Mucking it up. As with all things natural, we can easily screw it up. The nuclear option of destroying our biome is with antibiotics and drugs. It’s amazing that anyone lives through a course of antibiotics. Of course, they are wonder drugs when faced with intractable infection. But they are horribly overused, both in medicine and in confined livestock production. Overindulgence and an unbalanced diet can wreak havoc with our inner helpers. Most prescription medications, even birth control pills, are suspected of damaging our crucial gut flora. Like a Rube Goldberg device, it’s a complex mess when we start on a prescription drug regimen. Processed foods, the kind that invariably contain artificial and even “natural” ingredients, can have devastating effects. Pesticides, GMOs and stress can change our gut from good to bad.

Now, that’s some good shit. Consider that the balance and importance of a healthy intestinal flora is so vital that conventional docs are now using transplants of fecal matter from healthy individuals to re-introduce colonies of “good” bacteria into sick people. Take care of your own and you won’t have to get that done.