Home » Specials » Have a Ball 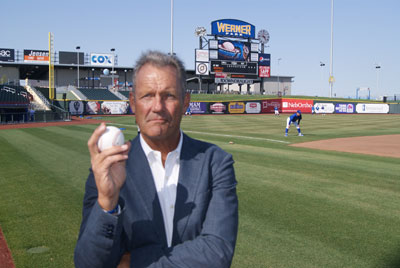 Riders on fiberglass mounts gently bobbed up and down on a candy-coated carousel down the left field line as the Omaha Storm Chasers’ Danny Duffy anointed Werner Park Saturday night with a right-down-the-middle called strike to Nashville Sounds second baseman Eric Farris. Basketballs bounced on a court beyond the left-center gap later in the third when top prospect Mike Moustakas doubled home Eric Hosmer, another player perhaps not long for the minors, as the duo joined Duffy in becoming answers to trivia questions on the subjects of first pitch, first RBI and first run scored in ballpark history. Whiffle balls whiffled beyond the center field wall three hours and fifteen minutes after Hall of Famer George Brett lobbed a ceremonial first pitch to Hall of Famer Bob Gibson as the Omaha Royals Storm Chasers inaugurated their new home with a nail-biting 2-1 victory before a reported crowd of 6,533, a number just beyond the fixed-seat capacity of the berm-bounded and cornfield-surrounded stadium. Baseball purists may scoff at the intrusion of such kid-friendly amenities into what was once America’s Pastime, but the Family Fun Zone diversions promise to help put butts in seats — or at least on faux horseback — for a franchise that finished a tepid 19th in attendance among 30 AAA clubs last season. Among the Storm Chasers’ 29 peers, 26 have built stadiums since 1978. Nineteen have followed the downtown model where baseball has been interwoven as a vital economic driver, a key element of a host city’s urban development. But those already downtown-heavy numbers are deceiving and belie the real import of baseball being played in the shadows of hotels, bars, restaurants and other walking-distance attractions. Two of the non-urban parks, those for the Round Rock Express and the Gwinnett Braves, are situated where there is no true “downtown” alternative to begin with. Round Rock is a suburb of Austin, Texas, and the misnamed Gwinnett Braves — much like the misnamed “Omaha” nine that actually plays in Sarpy County — has its home not in Gwinnett, but in Lawrenceville, both suburbs of Atlanta. The Colorado Springs Sky Sox should also get a waiver for eschewing the city for a foothills site and a home plate that allows stunning vistas of the majestic Pikes Peak and its rocky cousins. Though I am quite convinced that Las Vegas itself is, despite my several visits there that would otherwise suggest ample proof to the contrary, a largely mythical place with no corporeal existence of its own, but even their 51’s managed to find a way to build downtown dugouts. And perhaps we also should exempt New Orleans, whose Zephyrs play in one of the most populous of AAA cities, for taking a suburban location in a densely-packed, river-girded city that limited other choices for such land-gobbling grass, steel and concrete expanses. A truer look at the numbers then means that, when they reasonably could, 23 of those 26 “new” stadiums have subscribed to decidedly urban thinking when it comes to site selection for their AAA ballclubs. It has long been an inescapably scary belief of this writer that the Storm Chasers’ decision on Werner Park can be only one of two things — a trend-bucking stroke of imaginative genius or a tragic mistake. As for another of my phobias — add karaoke, dancing, plaid and iambic pentameter to the list — I have a secret to impart. My fear was that the new home of the Omaha Storm Chasers would take on the mien of a decidedly minor league park. And those fears came to fruition … in spades … and, boy, am I glad they did. I don’t know what I was thinking on this one. Werner Park is a gorgeous facility. My favorite oddity? The curiously peaked wall of the jutting left field gap that I’ll dub “The Triangle of Terror.” A perfectly intimate setting for watching a nicely turned 4-6-3 double play up close and personal, the park is a fitting antithesis to its cavernous ancestor, now a mere boarded-up shadow on a wind-swept hill more than 15 miles to the east. Let’s just hope that there is a maddeningly long, Disney-esque queue all summer long and for years to come at that bejeweled carousel just beyond the left field foul pole.