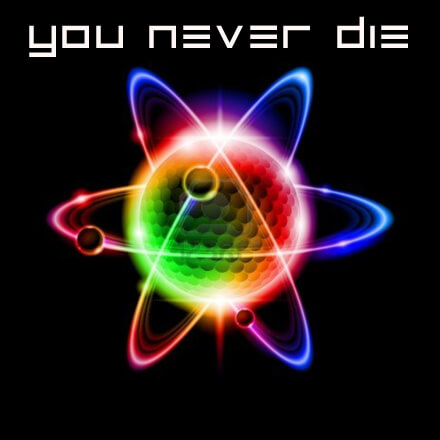 When I was nine years old, my sister took me to work with her on a summer Saturday. She sat me down in the Children’s Department of the old Omaha Public Library where she worked in the Catalog Department. Kids’ books were in their own special room with big wooden tables and solid wooden bookshelves. She told me I could read anything in there and went upstairs after asking the librarian to keep an eye on me. I was elated. It was the first time I was going to be able to pick out a book to read all by myself. Before that, it was always a schoolbook or one my parents had given me.

I sidled over to the shelves and spotted a big, red book titled, Our Friend the Atom. It was by Disney and that was good enough for an adolescent raised on “The Mickey Mouse Club” and “Walt Disney’s Wonderful World of Color.” From that book, I learned something that would shape the way I looked at the world from then on.

Eternal life: It’s something religions talk about, usually in specific terms and with qualifiers that determine when and if any of us will enjoy it. Souls, spirits and the like are said to be relegated usually to some kind of “afterlife” that is described in varying terms. The trouble with all of those religion-based scenarios is that they require adoption of some sort of tenets seeming to separate the world that we live in now from the world that we (presumably) would live in after the body ceases to function in the way we have grown to expect. But what we’ve been calling “death” isn’t really what we think it is.

There is nothing the matter: In order to accept my explanation, (and I’m pretty sure it’s right,) all you need is a dollop of common sense and a simple understanding of science and nuclear physics. See, what Disney’s book revealed to me is the simple scientific reality that our bodies, and indeed all of the seemingly solid, physical matter we know as “the world”, exist actually as the entity known as energy. Modern science, (and for the record, the ancient understanding of the rishis of India and wise men of many cultures,) teaches that energy persists and is in all things. Breaking down the body into its smaller and smaller constituent parts, we find finally that the body is atoms and that no matter how much further we break down those tiny parts, we find nothing that is solid matter. It just keeps getting into layer upon layer of energy. Those “particles” science keeps finding? They’re not solid. They’re just energy balls that contain even smaller energy balls. There is no matter to be found.

Losing weight: So live with it. You already know this: you’re not your body. You’re not solid matter. You are, plain and simple, without argument, nothing but energy. Period. Even what you call a “body” is nothing but energy. The energy that is you, energizes the atoms that are your body. Adjust or shift that energy, and the effect can be seen in the way the little balls of energy (atoms) of the body interact. (No surprise then that ancient sciences like acupuncture and ayurveda emphasize working on the energetic level to induce what we call “health.”)

So you are energy. And in addition, you have self-awareness. You are energy that has consciousness. Most of that consciousness is focused on the body and the things around us that appear to have matter. In fact, it wouldn’t be a stretch to say that most all the world is entranced by the illusions that lie before our eyes. Which means, of course, that we are fooling ourselves.

So, we are energy beings. And that energy that we are has consciousness. Now carry this thinking just a little further. Way further. Outer space kinda further.

Outer space seems empty, right? Wrong. There is no such thing as “empty.” Every single nook and cranny of the entire universe is inhabited by … energy. In the sparsest reaches of the universe, energy exists. There is nowhere where energy isn’t.

Here’s the jump: If you are energy and have consciousness, awareness, then isn’t it reasonable to consider that the energy that flows through the entire universe has awareness, too? Yes, it is.

Coming to terms: So now we come to religion. Religion is nothing more than a set of dictums that lay out terminology and semantics, wrapped in the trappings of ritual and liturgy. Religion is just words. One religion calls the all-pervasive, never-ending energy that flows through the universe “Yahweh.” One calls it “Allah,” another “God”. Others say “Elohim”, “Jehovah” or “Brahman.” Science calls it the Unified Field. New Agers call it Divine Being or Whatever. All are just words for the same thing. So become an atheist for a minute. Just call it “Energy that has consciousness and flows through all things.”

Energy also has a scientific reality in basic physics that it can neither be created nor destroyed. That said, when our personal energy shifts and no longer coalesces as a “body,” is there a reason our consciousness shouldn’t remain “aware?”