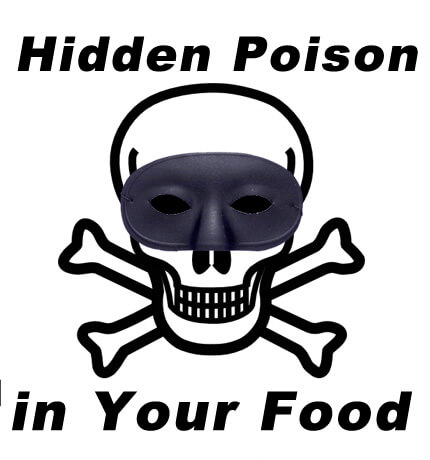 Every few days we hear of a new outbreak of tainted food reaching the American consumer. Hey, accidents happen, right? The 75 million who fall ill and the 5000 who die annually from food-borne illness are collateral damage when an error occurs and an overload of E. coli, Salmonella, Campylobacter or Listeria gets past the back door of a food factory. The United States Department of Agriculture is tasked with protecting the public and they do their best, right?

Bacteria-laced food is supposedly unintended, accidental. But there is a long list of toxic chemicals placed in our foods intentionally, with no purpose other than to increase the bottom line of the food corporations. These food additives are approved by the USDA as part of the category known as “generally regarded as safe” or GRAS. The list ranges into the thousands of chemicals used in everyday products, including food. Most have never been tested by any government agency for safety. They are, however, anything but. They’re in your food, not just the processed junk food but also at the meat counter and in the produce aisles. Most the time, you’ll never see these toxins listed on the labels there. Here’s how you can wise up with a short list of some of the worst.

Forchlorfenuron. Yep, it’s in your food. It’s a growth-enhancer used on fruit and linked to multiple health problems. Typically found in kiwi, grapes and melons. It forces the plant to grow more and bigger cells and makes fruit bigger and more regular in settings. It’s even used on wine grapes in Napa Valley. Didn’t know that, did you? Cheers.

Ractopamine. A nasty chemical that super-sizes industrial livestock like pigs, beef, turkeys and we get it in our food. China, Russia, Europe and about 150 countries ban it but US meat producers swear by it, despite the fact that the Center for Food Safety has found that it causes rapid heartbeat and other problems. In test animals, multiple birth defects were common. The warning label on it says, “WARNING: The active ingredient in Topmax, ractopamine hydrochloride, is a beta-adrenergic agonist. Individuals with cardiovascular disease should exercise special caution to avoid exposure. Not for use by humans.” But it’s in your food. Bacon may make your heart go a-pitter-patter in more ways than you realize.

RoundUp.  What a quaint, Western-style handle Monsanto gave to its best-selling, Agent Orange-derived liquidator. It sounds like the romantic wrangling that a bunch of cow-punchers perpetrated in a Hollywood oater. No one would buy it if it went by its real name, glyphosate. Anyone casually paying attention to health or eco-news knows about RoundUp and its reputation for devastation. It’s more publicly known uses are on glyphosate-resistant corn and soybeans in farm fields and squirted on weekends by the morons who just have to get rid of those weeds in the driveway or fairway. So, it’s no secret or surprise that glyphosate finds its way into your food. You would expect it in products that contain corn or soy, since it’s admittedly and indiscriminately sprayed on those crops. But you probably didn’t know that glyphosate is sprayed on crops like wheat, even though RoundUp resistant wheat isn’t grown in the United States and any application of RoundUp on wheat will kill the plant.

Why would commodity farmers spray RoundUp on a crop that they know will be killed by it? The answer is nearly insane. The official line is that glyphosate is used as a desiccant, something that will dry out the crop. Drier wheat at harvest means less likelihood of moist wheat rotting after harvest. A second possibility is that it is believed that killing the wheat plant pre-harvest with a dose of poison will increase grain production by stimulating the plant to produce more seed. The end result is that we get RoundUp on a food crop that goes directly into bread, cereals and other foods.

Vilsack, The Monsanto Minion Worse than the fact that RoundUp is sprayed on cereal crops just before harvest is the fact that the USDA does not even test for glyphosate residue in our food. RoundUp is the most widely used poison pesticide on the planet yet our government agencies refuse to test our food for glyphosate because it’s “too expensive” and they claim it’s safe. It’s clear that the agency charged with protecting the American consumer is instead protecting Big Food and Monsanto. This should come as no surprise, considering the Obama-appointed Secretary of Agriculture who decides USDA policy, Tom Vilsack, used to work for Monsanto! Meanwhile, independent testing has shown glyphosate is present in up to 80 percent of our food and the World Health Organization has confirmed the glyphosate/cancer link. Thanks, Tom.

Other fun chemicals you’ll likely find in your food include Diphenylamine, Thiabendazolem, Aldrin (five grams can kill an adult male), DDT, Dieldrin, Endrin, Mirex, Toxaphene and others. Enjoy googling them to find out more. Meanwhile, choosing organic can help you avoid many of them. Oh, and don’t forget the most insidious toxin of them all: refined sugar. Let’s not kid ourselves. The USDA exists to protect the interest of Big Food. The only one looking out for you is you.