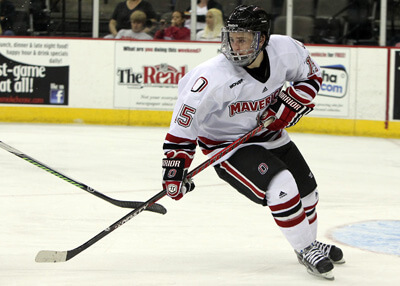 Fifteen years ago former University of Nebraska at Omaha athletic director Don Leahy and few influential Omahans came up with a crazy plan: Let’s play college hockey in Omaha. It seemed preposterous. Where was the infrastructure of youth teams? Where would the team play? Who would want to coach a fledgling program? Who would want to watch?

Fifteen years later, as UNO starts its second season in the most prestigious hockey conference in the country, the issue is not how will the Mavs compete, but how they will deal with expectations. UNO is ranked No. 14 to start the season in the first USA Today/USA Hockey Magazine Men’s College Hockey Poll.

Michigan, Yale, North Dakota, Boston College and Boston University. Those are the traditional powerhouses ranked alongside UNO. College hockey hotbeds like Maine, Minnesota, Wisconsin and Cornell are looking up at the Mavs to start the season. After opening last year picked to finish eighth in the ultra-tough Western College Hockey Association, the Mavs were picked by the conference coaches to finish fourth, one spot below where they finished in 2010-2011.

That’s the difference between UNO hockey in 1996 and UNO hockey now – the Mavs are good and everyone knows it. When the Big Ten moved ahead with plans to create its own hockey conference, plucking Minnesota and Wisconsin away from the WCHA, the Mavs were good enough to be included in the National Collegiate Hockey Conference.

The sport’s newest super-conference will begin play in 2013, but for now the Mavs’ focus is on competing for the WCHA crown and a return to the NCAA tournament. Last year UNO rode stalwart junior goalie John Faulkner and a talented and large freshman class to its second consecutive 20-win season under Coach Dean Blais, and a heartbreaking 3-2 overtime loss to eventual runner-up Michigan in the tournament.

This year the Mavs need to find some offense from a relatively young group of players. Four of the top six scorers are gone from last year; and UNO’s leading returning scorer and captain, senior forward Alex Hudson, has been suspended indefinitely for an undisclosed violation of team rules.

But the Mavs may have found a first line that clicks in their season-opening 4-1 exhibition win over British Columbia. Sophomore forwards Brock Montpetit, Matt White and junior Terry Broadhurst had multi-point games in the season opener.

“Me, Terry and Matt got thrown together here this last week,” Montpetit said after leading the Mavs with two goals and an assist in the opener. “It was kind of surprising that we clicked like that right out of the gate.”

Throw in forward Ryan Walters, 11 goals and 23 points last year, and UNO has an exciting frontline to build on.

“Those are three real talented hockey players,” Blais says. “We have Walters, Montpetit, who is obviously very talented, and White as a finisher.”

Along with Walters, freshman Josh Archibald, one of 10 rookies, could have the potential to lead the second line. The sixth-round pick of the Pittsburgh Penguins scored in his UNO debut, was the second leading scorer in Minnesota’s Class AA high school ranks last season and comes from an established hockey legacy as his father played for Blais at North Dakota.

“We’ve got two comfortable lines right now,” Blais says. “The third, fourth and fifth we’ll keep switching around until we get the right combination.”

With an average size of 6-3, 205 pounds on the backline the Mavs have some intriguing, and big, options in defense.

Junior Bryce Aneloski returns after appearing in all 39 games last season and is UNO’s leading returning scorer among defensemen. Sophomore Michael Young appeared in 37 games for the Mavs in his freshman season, ranking third among defensemen with 17 points last year. Sophomore Tony Turgeon – the biggest of the Mavs’ backline at 6-4, 230 pounds – will add depth and experience.

Junior goalkeeper John Faulkner could be poised for a breakout season. Now in his fourth year in the program, Faulkner became the first keeper in school history to start an entire season in 2010. He ranks second on the school’s list for all-time wins. Blais will be looking for a little more consistency from Faulkner this season. He recorded 20 of the team’a 21 wins last season, including six shutouts, but allowed at least three goals in 15 losses.

“You don’t do anything without good goalkeeping,” Blais says. “We’ve got big, mobile defensemen. We’re good size-wise on defense and our forwards can move, we’ve got fast forwards.”

Fast up front, big in the back, with an experienced keeper in net, could be the recipe for a big season for UNO, although the Mavs have a schedule that will test them week in and week out.

The regular season starts Friday, Oct. 7 against Mercyhurst College in the annual Mutual of Omaha Stampede. A week later the Mavs travel to Fairbanks, Alaska for the Alasaka Goal Rush before starting conference play with a series against the University of Alaska-Anchorage and Wisconsin.

November opens with a home series against No. 7 Colorado College followed by a road trip to Bemidji State, a team that beat UNO five out of six times last season. A visit to 4th-ranked Denver closes a challenging month.

The WCHA’s unbalanced schedule means the Mavs only travel to No. 3 North Dakota, but they do get defending national champions University of Minnesota-Duluth at home on Jan. 13 and 14.

It’s a schedule full of tough games, but that’s why UNO joined a conference like the WCHA. Their early success last year against their new conference foes is why they’ll have a high-profile home for the hockey program two years down the road.

And now, with UNO hockey a fixture on the national college hockey scene, what started as a dream for a few hockey fans and UNO boosters 15 years ago is becoming a reality – Omaha might be a hockey town after all.

UNO takes on Mercyhurst College on Friday, Oct. 7 at 7:37 p.m. at the CenturyLink Center as part of the Mutual of Omaha Stampede. The Mavs will play the winner of Colgate-Robert Morris on Saturday, Oct. 8 at 7:07 p.m. Tickets are availabl by calling (800) 745-3000 or visiting omahasteam.com.

The Omaha Lancers started the season slowly, losing three of four preseason games and dropping their season opener 3-1 to Waterloo. But they are again expected to be among the contenders in the USHL’s Western Conference and return to the Clark Cup playoffs for the 23rd straight season.

Coach and general manager Bliss Littler is in his fourth season in Omaha and joined the 300-win club last season. He has a good mix of returning talent and exciting newcomers this season.

The Lancers will be led offensively by forwards Jonathan Liau, Ken Babinski and Anthony Hamburg. All three are back from successful seasons. Hamburg, a 2009 NHL draft pick of the Minnesota Wild, is a veteran who had six goals and 15 assists last season. Liau, a Princeton recruit, is the Lancers’ leading returning scorer with 11 goals and nine assists in 2010-11.

Omaha has a pair of intriguing options in goal. John Keeney is entering his third season in net but he could be pushed for playing time by rookie Alex Lyon. The Yale recruit stopped all 34 shots he faced in a 3-0 preseason shutout of Sioux City.

The Lancers return to the Omaha Civic Auditorium on Friday, Oct. 7 at 7:05 p.m. for a game against the Fargo Force. Two days later they face Sioux City on Sunday, Oct. 9 at 5:05 p.m. Tickets start at $14 and are available at Lancers.com.