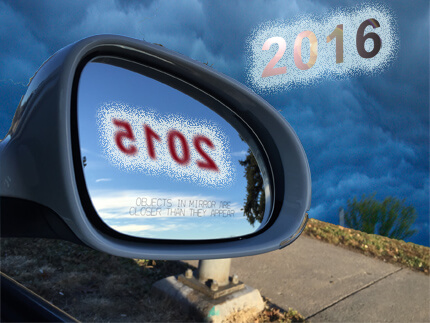 Here comes the sun. In case you haven’t noticed, gasoline is under $1.90 per gallon. That’s crazy. No one can really answer why that is, beyond geopolitical speculation. But really good news helps us predict that solar will be the big move in 2016. The cost of solar will continue to plummet and the output efficiency will continue to grow. Clean energy will take a real leap forward in 2016. That evil of ethanol will hang in for a couple more years but eventually solar and wind with advances in power storage á la Elon Musk’s new battery system will make raping the land with monoculture corn or sawgrass a thing of the past. Clean energy will be a high point of 2016. Just in time.

Vedge out. Hey, anyone know a better way to spell that? Hey. Listen up. Would you do something simple to save the lives of 1.4 billion slaughtered, thinking animals next year? How about going meatless for Mondays? The point is, Americans are already eating less meat. We have been for about 20 years and next year will be no different. We’ll see the decline of America’s fixation with animal protein and though the reasons are varied, the result will be clear. In 2014 we killed 400 million fewer animals for consumption. Next year will see another decrease and we’ll all benefit from that.

Superbug. The Ebola epidemic taught us that we walk a tightrope without a net when we maintain open borders without health checkpoints and when we think we know it all. And we’re skating along on the edge of the razor by feeding 75 percent of all our antibiotics to livestock. Confined animal feed operations (CAFOs) are a research lab developing the deadliest biowarfare microbes known to man. Next year will possibly see an Ebola-like outbreak of an antibiotic-resistant bacteria that may take us further down the slope into the post-antibiotic era. It’s been coming. We’ve been warned. Yet we do nothing. Despite the Center for Disease Control’s stern warning, we are feeding more antibiotics to our animals, not less. And new bugs are already being detected in China’s meat factory “farms.” That antibiotics time bomb is primed to explode. Best chance for you or me? Get your immune system stoked up.

Inflammation the hot item. Health news in 2016 will focus on the impact inflammation has on the body. It’s not a new idea but the new hot button for the Dr. Oz’s and Mercola’s of the media stream will be how certain foods, thoughts, emotions and activities activate inflammation response in the body and how to put out the fire.

Prep school. Looming crises of the social, environmental, economic and political ilk will reboot the movement toward disaster preparations. Preparing for the apocalypse isn’t the idiosyncratic fringe movement it used to be. As water, food and shelter and supply lines are threatened by either civil unrest or natural and manmade disaster, more Americans will do their best to learn how to take care of their own survival needs. Learning how to survive for days or even weeks without social infrastructure will be vital.  Example: In 2014, a chemical spill in West Virginia left 300,000 people without water, period. No water. For almost a month. Could you survive? Stores stock about three days’ worth of food at any given time. You’ve seen what a little snow storm does to store shelves. What if something bigger happened? Prepping is in for 2016.

Economy for 2016. Doubt most Americans have ever wondered why the words “economy” and “ecology” share the same prefix. Well, oikos is the Greek language root for “house.” One word — economy — means the “management of the home.” The other, ecology, means the “study of our home.” They are linguistically linked because they are intrinsically linked. Throughout history, our economy has been based on and linked to the natural resources inherent in our planet Earth. Precious metals, harvestable plants and animals, land and all the resources the Earth is made of — including fossil fuels —form the basis of wealth and trade. The management of our home’s economy is based on the life of our home’s resources. If you want a clue as to why our economy is stagnant and floundering, primed for upheaval, just take a look at the state of the resources on which it is based. The planet’s raw materials are dwindling. Arable land, breathable air, drinkable water, edible food and indeed, rare metals, minerals and energy sources are getting more and more scarce. So our economy has taken leave of its base and is now anchored in service, amusement and information resources. For the first time in human history, our economic well-being has jumped the shark and is rooted in vaporware. A completely contrived system of finance and currency has no basis in reality. Since we’ve diminished our (environmental) collateral, that loan is going to be called in and the piper will have to be paid. Be prepared for upheaval. It’s not a good thing or a bad thing. It just is. The best preparation is not stashing food, water or supplies. The best preparation is to make yourself as adaptive as possible. Depend less and suspend more. Observe the holism of life and recognize that with as few attachments as possible and 2016 will be a breeze.