Home » Specials » Just Can It! 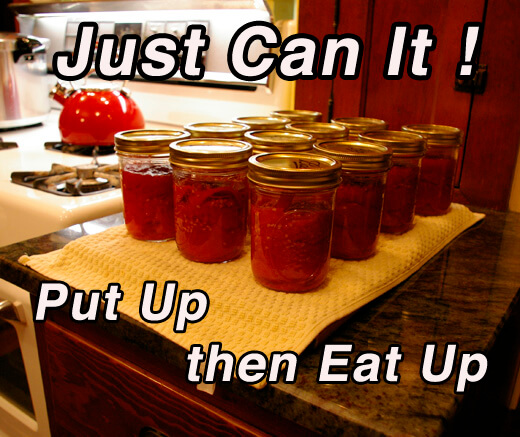 At farmers markets and in home gardens across the region, produce is poppin’ at a prodigious rate. Summer’s bounty is the tastiest and most nutritious right now so we’re facing a dilemma: how do we take advantage of it? Seems we have two choices. We could either try to eat everything at once or figure out a way to keep some of it around for eating later. The answer is to preserve the peak of the harvest for later enjoyment.

There are five common methods to keep real food on the table for autumn and winter months: drying, salting, canning, freezing and doing nothing. All are easier than you might think and when done well, are far better than buying processed foods in the off-season. Remember, it’s important to pick the freshest, ripest and best food that you can to “put up” for later enjoyment. That starts with a visit to your local farmer or your own garden. With today’s food prices, growing your own is like printing your own money.

Drying and Salting Did you know that sushi was originally developed as a method of preserving fish? Nigiri sushi, the kind most of us are familiar with at sushi bars, didn’t come until later. Dehydrating and salting are two methods that work well with animal protein. Jerky is a good example of that. Dehydrating also works very well with produce, too. Solar ovens, commercial dehydrators and often just using the kitchen oven can give you a way to preserve food without refrigeration. A big advantage of dehydration as a method to preserve the harvest is that you can store the results almost anywhere. Dehydrated food is easy to carry, serve and store.

Freezing For 21st century man, freezing is convenient and probably easiest — until the power goes out in that January snowstorm. For two popular and plentiful summer crops, corn and tomatoes, freezing can be simple. With fresh corn, you can just husk and clean the corn then place three or four ears straight into ziplock bags and let the freezer do the rest. Later, let it thaw and treat it like fresh. Another method and one I prefer is to clean and blanch the ears then slice the kernels off. Place that into a freezer bag and then treat it like fresh when you want to use it. Works well when you want to use a few kernels to top a salad. And don’t ever let fresh tomatoes go to waste. Freeze them. With cherry tomatoes or sugary, just pop them into a bag whole. With full size, freeze either whole or quartered. When doing quartered, place them on a cookie sheet in the freezer for a couple of hours first, then bag. Of course, you can’t use these for BLTs but they work great for sauces, soups or in cooking.

Low pH (more acid) produce like tomatoes and fruit can be processed in a boiling water canner but those canners don’t develop the heat necessary for meats, vegetables and other items. A pressure canner is sealed when you use it on the stove and the cooking temps get much higher.

How easy is canning? Cut up some local tomatoes. Seal in canning jars. Put the jars in a canning pot that contains water. Seal the cover of the canner and boil for a specified time, about 20 minutes. Let the jars cool and put them on the shelf in a closet or cupboard. How hard is that? Different foods require different cooking times and there is plenty of information online about canning. Canning can be a fun family activity for a weekend afternoon.

Do nothing. Much of nature’s bounty is perfectly designed for later use. Root vegetables, squashes, nuts are good examples. Our ancestors stored yams, potatoes, carrots, beets, squash and the like in cool, dark root cellars. We’ve even kept acorn squash from October to March in a cool, dark pantry cupboard. If you have root crops in your garden, then mulch heavily, cover with a waterproof material to keep the ground from freezing and you can dig them up as you need them.

As a culture, we’ve distanced ourselves too far from our connection with real food, the basis for health.