Home » Specials » Laughing Your Ass Off 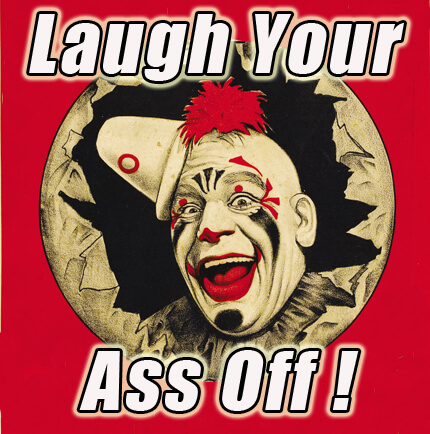 Cousins didn’t accept their prognosis. While in excruciating pain from ankylosing spondylitis, a rare disease that inflamed his spine, Cousins found that after watching a Marx Brothers movie on television, he laughed so hard that it exhausted him and he slept soundly without narcotics for the first time in weeks. Cousins ordered in a film projector — it was 1964 — and all the Marx movies and slapstick comedy he could get his hands on. He improved dramatically. Pain decreased. He slept soundly. And amazingly, blood tests showed his immune system was healing and inflammation went down.

Cousins had been editor of The Saturday Review and went on to chronicle his recovery in his 1969 book Anatomy of an Illness, a cornerstone in the field of modern laughter therapy. The entire movie version is free at https://youtu.be/0LwKd68S15I . For the next 20 years, Cousins gathered scientific proof of his belief. He established the Humor Research Task Force at UCLA, coordinating world-wide clinical research on humor therapy.

Like so many common-sense and natural approaches to healing, laughing for health wasn’t new with Cousins’ experience. Laughter is cited in classical Greek civilization as gelotology, using the Greek root gelos- or laughter. Historical, (or hysterical?) physicians in ancient Greece sent patients to humorous shows. In many other cultures, jesters were considered an important part of every royal court.

Native Americans used clowns as a part of shamanic ritual. One can hardly drive a mile in the American Southwest without seeing the image of one Hopi symbol of humor, Kokopelli. The work of this mythical mirth-maker is to bring harmony, fertility and joy to the tribe by making the tribe laugh. He often appeared with his sidekick, the Trickster or Coyote. Even the Bible endorses laughter as a form of healing and wellbeing in Proverbs: “A merry heart doeth good like a medicine: but a broken spirit drieth the bones.” And Ecclesiastes: “A man hath no better thing under the sun, than to eat, drink and be merry.”

The few, the proud, the funny. Patch Adams, M.D. is founder of the Gesundheit Institute and became famous as the doctor who inspired Robin Williams to portray him in the eponymous film. Adams has devoted his life and medical career to the application of laughter and humor as the medicine that can lift the human spirit and act as a source of healing. Adams put aside many of the conventional perceptions of the medical field and has made laughter and humor the primary prescription he and his staff dispense.

Since the 1990s, Adams has assembled a militia of funny folks traveling the globe spreading good cheer instead of bullets and bombs. His global outreach efforts have spread to Kosovo and Kabul, Chile and Sri Lanka, continents and countries in every hemisphere. Adams’ current plans include expanding the Gesundheit Institute healing center based on holistic medical care extolling the belief that one cannot separate the health of the individual from the health of the family, the community, the world, and the health care system itself. Laughter is the most potent medicine.

Fake it ‘til you make it. In India, another medical doctor has been making headlines with his Laughing Clubs that practice Laughter Yoga. Dr. Madan Kataria organizes group laughter sessions called laughing clubs. Started in 1995, the number of clubs worldwide has grown to 60,000 in 60 countries worldwide, according to the website LaughterYoga.org. Kataria and others emphasize the belly laugh. And he has found that forcing a belly laugh leads to the real thing and both benefit the body. Actor John Cleese visited India and a short video is at bit.ly/amUkaZ

Loretta LaRoche works with the Mind/Body Medical Center in Boston. She is also author of Relax: You May Only Have a Few Minutes Left, about using humor to reduce stress and be healthier. She cites numerous studies.

Studies done by Dr. William Fry at Stanford University range from 1971 to current and have been published in peer-reviewed journals such as the Journal of the American Medical Association and the Journal of Biological Psychology. Research by Lee Berk at Loma Linda University School of Medicine also supports the worth of a good laugh. Laughter can improve circulation. Skin temperature increases and we warm up. Blood pressure lowers and heart rate can stabilize. Blood chemistry changes; oxygen levels increase. Laughter reduces tension.

Laugh your ass off. Berk found that laughter lowers the level of cortisol in the blood stream. Cortisol is a hormone that increases when a system is under stress. It causes us to gain weight, adding bad fat. Lower your cortisol, lose your fat.

Other positive things happen with laughter. The immune system is boosted in other ways. T-cell and killer cell production is elevated. White blood cell activity is increased. According to LaRoche, laughing has been shown to increase the production of other elemental immune system cells and gamma-interferon, suspected of fighting cancer.

Those famous neurohumors, (what a perfect name!) endorphins, increase with laughter. They are natural pain-killers often called natural opiates. Ten different muscle groups are exercised when we laugh. They contract and relax and in a very real way perform a sort of visceral massage on our internal organs.

The research tells us that Patch Adams, Dr. Kataria, Norman Cousins and the Bible are right. Laughing is healing. So, don’t worry. Be happy. Laughter is good for you.