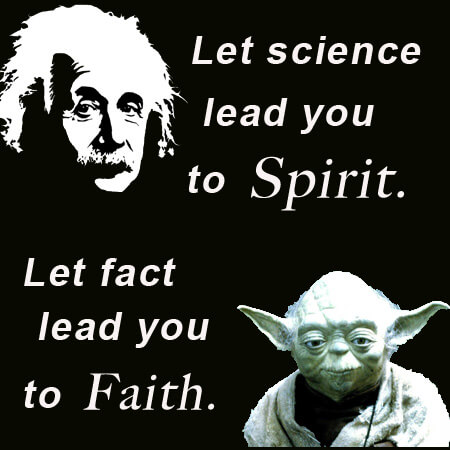 For all the trillions of dollars spent throughout history, science has yet to prove the existence of one basic thing: solid matter. Even today, at the Hadron Collider in Switzerland, physicists are searching for matter — solid, touchable, provable matter. The conclusion is that solid matter does not exist — anywhere.

Sum it up: Science tells us plainly that everything we think is solid is actually made of atoms that are nothing but smaller and smaller “particles” filled with energy. First atoms, then electrons, neutrons, positrons, quarks, leptons, mesons and all the other particles in succession and still you won’t find any that are solid matter. The universe — everything comprising it — is nothing but energy. That energy is continuous. It flows through and comprises all things. There is no gap or separation. We, and all the universe, are energy. So, it’s all energy, everywhere.

What’s in a name? Science hasn’t really given a name to the all-inclusive energy. For the sake of discussion, let’s call it something. So, how do you want to call it? Pick a name if you want. When I was in high school, I compared what I learned in physics class with what was discussed only hours later in theology class. In physics we learned energy can neither be created nor destroyed. Later, in theology, we talked about how God always was and always will be. Sounds just like God is energy to me. So, for the sake of convenience, can we use that term? Remember any of you atheists, you can call it whatever you want: consciousness, cosmos, barking pumpkin, whatever. The premise I submit holds true regardless of semantics. Science tells us that energy can neither be created nor destroyed. It is eternal.

Consciousness. In order to validate the argument that this universal energy can rightfully be called “God”, that energy would have to be conscious, to have thought. Well, how do we know it doesn’t? You must agree that you have consciousness. No one is doubtful that a human being has consciousness and in a very crude way you can say a human is naught but a conglomeration of chemicals worth about five bucks. So it’s not a huge stretch to consider that a field of energy that stretches billions upon billions of light years and more might have consciousness, is it? I suspect that the energy that flows through all things does indeed have consciousness.

The signs are there. Throughout history, the esoteric and metaphysical have been but conjecture and philosophy. No one has proven “God” or universal connections. But no one has proven that the visible world is real, either. And we know for a fact it’s certainly not what it appears to be. It’s not solid. It’s not made of matter at all. All creation is one continuous field of energy.

If there is not really matter, there is no differentiation, no separateness. The truly meaningful element of any experience is not the apparent, which we know is not real, but the obscured, that which is real but not so apparent: the underlying energy that flows through all things. In that sense, there is no difference between a baby and a button. All that matters is the energy that operates on the non-visible plane that unites them. Moving too fast?

Nothing Matters. Yes, it does. Nothing does matter. What appears to be nothing is really something: energy. Over the past few centuries, we’ve learned to measure that energy in its variety of appearances. We associate Ben Franklin with the “discovery” of electricity; Galileo and Isaac Newton are associated with kinetic energy; Henri Becquerel found nuclear energy for us; Edison, Tesla, Marconi and others are associated with radio wave energy and so on down the line. One of the most important discoveries of an energy form took place in 1964 at Bell Labs by a guy named Arno Penzias. He and his team accidentally measured the background cosmic energy that flows through the entire universe.

But long before those men, who developed technical ways to measure various energy forms, were the rishis and lamas and priests of ancient ayurveda and Chinese science. Those true scientists (since “scientist” actually means someone who “knows” not someone who observes and measures,) knew of all these various energies but measured them only with the human senses, the only tools they had. And measured quite accurately, I might add.

The substance of the universe is consciousness. So, we pat ourselves on the back and register our brilliance by the forms of energy we have learned to measure. Yet the one form we “know” but overlook in our myopia is the energy of thought. It’s there. We know it and it knows no bound. We just haven’t learned to measure it to our satisfaction. By any measure, though, it’s fully legitimate to call that energy by any name we wish, even “God.”

Irony of irony. Many religious zealots reject the notion of a “Big Bang” that originated the Universe. Few realize that the very concept of a “day without yesterday,” a day where time began, is the scientific brainchild of a Catholic priest. Monsignor Georges Lemaitre may be the greatest scientist you’ve never heard of. Einstein praised him. Our entire concept of modern astrophysics and cosmology is based on his original idea put forth in 1927, that all of creation began with an initial energy burst, the Big Bang. What is still to be answered is the question, “What was all that energy doing right before the fuse went off?” And what shall we call it? If we are not shocked that consciousness runs through the $5 worth of elemental chemicals that we call a “human being,” then it’s truly not a reach to believe that consciousness runs through an energy big enough to fill the known universe. All we have to do is choose a name for it. And God works.