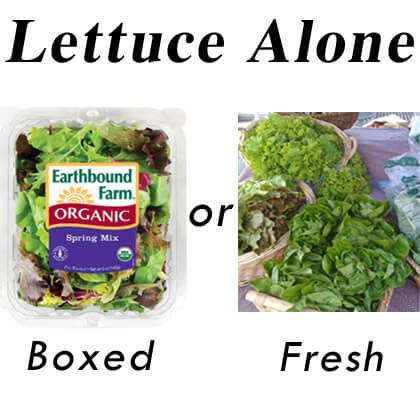 Four or five times a week, our evening meal will be some variation of a large salad. The garnish may go from a grass-fed burger or filet to sardines or maybe hardboiled eggs. But always the bed of the salad is a mixture of greens with avocado and tomato and various raw veggies. And, True Confessions time, we’ve been buying those packaged organic lettuce mixes for a few years now. We like the variety those blends offer and it’s nice to get unusual choices like mustard greens, arugula, baby spinach and herbs all pre-washed in one package. Our summertime kale or chard augment but the apparent convenience of just tossing the packaged leaves onto the plate is hard to beat. But we may be changing all that.

At what price convenience? You know how there are times when you know something or at least suspect it but somehow your mind just doesn’t want to believe it’s true so you just suppress it? Well, many years ago, well after having learned about MAP (Modified Atmosphere Packaging), the method commercial food production uses to boost shelf life and appeal to foods, I noticed something about that bagged lettuce that was showing up in supermarket produce sections. I don’t recall what brand it was but I noticed that there was a detectable smell when I opened a new bag of lettuce. It was a chemically tainted odor, ever so subtle. I called the 800 number on the bag. My questions were pointed and detailed and eventually I got the answer I suspected: a specially concocted gas filled the bag of lettuce when it was packed, sealing the greens in a modified atmosphere that kept them green and fresh-looking for days or even weeks beyond normal.

This special air contains a specified balance of gases designed to keep the food good-looking longer so the picky American consumer will buy it. Suffice it to say, it ain’t normal air in there. And just about any food you can think of has its packaging tweaked to keep it pretty. Cheese, beef, poultry, pork, baked goods, fish, crab, pasta, canned sauces, prepared foods and, of course, produce, including lettuces and greens, carrots and celery, mushrooms and grapes.

For lettuce, the recommended mixture of gases is five percent oxygen, five percent nitrogen and 90 percent carbon dioxide. This balance keeps the greens from wilting and rusting, even though it could be weeks old and far removed from the nutrient-dense natural food it once was. And guess who pioneered MAP for bulk shipments of their lettuce? No big surprise here: McDonalds.

“Plastics.” Ever since the character Mr. McGuire uttered that famous line in The Graduate, we should have suspected. Plastic may well be the invention that doomed the planet. It’s ubiquitous, nearly eternal and used to wrap our food, including that pretty pre-washed lettuce mix. Polyvinyl chloride (PVC), polyethylene, low density polypropylene, polystyrene and polyester are just some of the chemical-laced plastics groping our foods. All of them leach chemicals. How much of those get into our food is unknown but I’ll tell you this, if I could smell them, that means I’m breathing them.

Magic meat. What do you think of a piece of meat that sits in your fridge and never turns green or brown but stays bright red, like a fresh-cut steak? It’s either a magical unicorn filet or it’s been packaged in a poisonous gas and in this case, carbon monoxide. Yes, commercial meat is typically packed in deadly carbon monoxide gas to keep it looking fresh, longer. CO starves meat for oxygen, bonding hemoglobin, just like it does a suicidal human in a closed garage with the Buick idling. Without oxygen, meat doesn’t decompose like it would in nature so no turning brown. It doesn’t rot.

Stop and think about that for a minute. What is digestion? It’s a form of regulated decomposition that your body initiates so you can break down food and retrieve the nutrients that (presumably) are part of the meal. Gross as you may think it sounds, food basically rots in your digestive tract so you can use it. Now consider a chunk of dense, red meat that has been chemically treated specifically so that it does not rot. Or a bag of greens that has been artificially induced to appear fresh by retarding oxidation. Think that might impede digestion? Exactly.

The answer is to source all meat from farmers we know who wouldn’t think of packaging meat in carbon monoxide. There’s something wrong with an industry that brags that packaging poultry in carbon monoxide will extend its fresh look from instead of two days on the shelf to a whopping 21 days!

Gone green on greens. Meanwhile, solutions to the chemically treated lettuce conundrum are simple: either grow your own, buy it direct from farmers or purchase a bulk head of lettuce then wash and store at home in plain old air. If you’re confused about how adulterated our food supply is, try this easy rule of thumb when venturing into the supermarket: If food comes in its own skin, buy it. If it’s wrapped in plastic, metal, cardboard or anything else, caveat emptor.