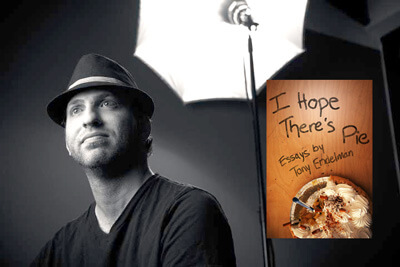 When life gives you lemons, make pie. At least, that’s what Omaha-based writer/comedian, Tony Endelman, author of Randy Penny: Cordially F@#*ing with People and I Hope There’s Pie, a recently released collection of personal essays about his life, touches upon in his latest book. “I was always the class comedian, but never really the class clown. I was the kid with the witty comment. I’ve always been a huge smart ass,” says the University of Wisconsin graduate.

It’s Endelman’s apparent lifelong penchant for cheekiness that inspired a practical joke at the office.  “I really wanted to (mess) with one of my bosses. So, I sent him an email (messing) with him.”

After a few months, he confessed to his boss. Some of his friends who knew of the running joke then convinced Endelman to try it out on random people leading to the creation of his internet alias, Randy Penny and the website www.thanksrp.com.

Finding people through Craigslist, Endelman began responding to people’s posts under the identity of the slightly naive and overly friendly persona very much in the ilk of Special Ed, the mentally challenged puppet from the show Crank Yankers. “I’m just so weird and outrageous that it makes for these really outrageous conversations,” Endelman said. “The people I’m conversing with have no idea who I am. I’m not really trying to make them angry, just string them along and (mess) with them.”

His website gained so much popularity that he pitched the idea to a publisher that lead to his first book Randy Penny: Cordially F@#*ing with People, a collection of these hilariously absurd email conversations. On the coattails of that success, Endelman has written his second book I Hope There’s Pie. “I describe funny quirky experiences I have been through, it’s about growing up. I talk about sex and drugs, work and fighting with my parents. I wanted to put something out there that was really easy to relate to but also very funny.”

Exposing himself as a man who can not only laugh at himself but, also share that humor found, silver-lined, beneath the canopy of emotions that is the human condition with others, pointing and prodding at everyday moments that, when viewed objectively, can be laughed at for their inherent ridiculousness.