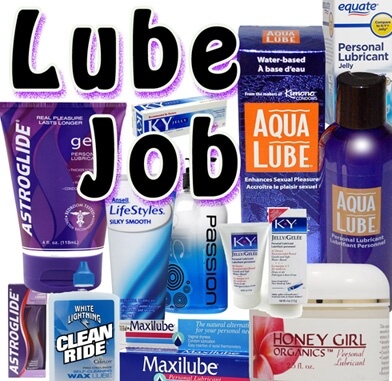 In those intimate moments when stroking is sexy and friction is foe, we sometimes reach for that little tube of love lube to assist the ultimate body language. In modern times that means venerable Vaseline or the gelatinous K-Y. As sexual mores of the later 20th century expanded and our, ahem, tastes matured, personal lubricants and intimate care products became a niche market. That market has climaxed with an overwhelming selection of flavorful and stimulating chemical ingredients that we can smear on our private parts to enhance our experience. But how much attention is given to what we slather on our bodies? Apparently not enough.

Delicate parts are called that exactly because they are. Yet, it is surprising how little we care about where we put them or what we put in them. (Not to mention the character of the person attached to them.) Visit the intimate supplies aisle of any drugstore and you’ll find a selection of stimulating creams and gels claiming to make sex of any sort an exciting experience. At the very least, these lubricants promise a friction-free encounter. But are the ingredients safe? A handful of studies question the safety of these sex aids, although none have shown cut-and-dried proof of risk. Some of the experiments have shown that personal lubricants can damage cells lining both the vagina and rectum, potentially making the body more vulnerable to sexually transmitted infections (STIs). Recent research has found that chemicals in many lubricants actually increase the likelihood of sexually transmitted infections and cause damage to cell structure.

A Slippery Slope. We live in an age where consumers are demanding foods that are GMO-free, pesticide-free, organically grown, all-natural and thoroughly vetted. That’s sensible given that shoving food in our mouths is the easiest way to introduce unwanted or dangerous chemicals into our bodies. But eating isn’t the only pathway inside.

Our skin admits chemicals easily and the mucous membranes of the body are especially vulnerable to pollutants. The mouth, the vagina, rectum and penis all have their own ecosystem and specialized skin cells. The pH balance, especially of the vagina, is crucial to maintaining health. Changing that chemistry puts stress on the immune system, both locally and systemically. So when we enlist the aid of “Lover’s Little Helper” for added ease of entry or flavorful fun, we may be headed down a slippery slope that compromises our health or that of our partner.

Drilling with oil. Our first smooth move regarding lube jobs and love might be to consider what’s in most personal lubricants: petroleum byproducts. The very fossil fuel we, as a society, are doing our best to move away from is the common base of the most popular love lubes. Stop and think about that for a minute before you grab your pump handle. Petrolatum, the main ingredient in lubricants called petroleum jelly, isn’t exactly what you might want on your junk. It’s linked to cancers of all sorts. Though salves like Vaseline are considered safe, is a petroleum byproduct what you want to make love with?

Safer love lube. Given the current trend toward simple ingredients and purer substances, consumers are looking toward personal lubricants with fewer ingredients and ones that avoid petroleum chemicals and synthetics. In that regard, the market is engorged. There are more lubricants to choose from than ever before. Some appear to be safer than others.

Oil or water? The biggest question is whether to use an oil-based or water-based lubricant. Oil lasts longer but is not so easy to clean up. Water-based cleans up easier but often needs reapplication. If opting for oil, one can hardly go wrong by choosing food-quality ones. Olive oil has been used for centuries and shows no research indicating cell damage or STI. Other food oils appear safer choices as well. Meanwhile, a number of commercially developed water-based lubricants have hit the market. Most of them rely on plant cellulose such as derivatives of aloe vera. However, water-based does seem to lose slipperiness quickly.

Whether one chooses oil- or water-based, the total ingredients have to be considered. Logic dictates that the more adulterants, the greater the likelihood of cellular damage, especially to the vagina. Choosing the wrong lube can affect yeast balance, disease transmission, conception and overall health of those private parts.

Researchers at Johns Hopkins found damaging effects of over-the-counter lubricants depend on a factor called osmolality. That’s a way of describing the overall concentration of molecular ingredients in a product. For instance, a version of K-Y Jelly with an osmolality more than 30 times the body’s own fluid, increased herpes transmission more than ninefold in lab tests1. Researchers say that the high osmolality of some lubricants likely causes epithelial cell damage because of simple physics. “We’re full of sugar, salts, and proteins that make up the constituents in our cells,” explains Charlene Dezzutti, a professor in the department of obstetrics, gynecology, and reproductive sciences at the University of Pittsburgh. And there is a certain concentration of those components in the human body. Interfering with that balance can wreak havoc.

Many would contend that foreplay is the finest lubricant. Given that, know what’s in the tube before you squeeze it out.