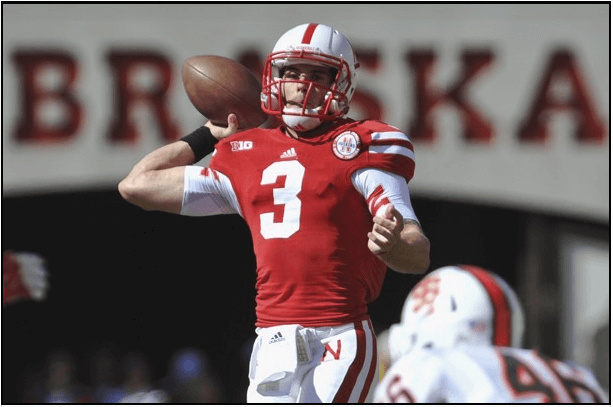 The answer was obvious, really. Was it the low point of his career?

“It” was a reference to last season’s 48-17 loss at Wisconsin, the Huskers’ first conference game as a member of the Big Ten. Martinez threw three interceptions during a 5-minute-plus stretch that included the first play from scrimmage in the second half.

So yes, Martinez probably hasn’t endured any more adversity than that.

But a year has passed, no pun intended, and Martinez has learned a good deal since then. The numbers reflect it. In four games, he has completed 65-of-92 passes for 878 yards and nine touchdowns, with only one interception. His completion percentage is 70.7, his efficiency rating 180.93.

Numbers can be numbing, of course, but in this case, they can be instructive as well.

“People snickered when I said Taylor is going to make a big jump this year, and he has,” coach Bo Pelini said. “I saw it through the spring. I saw it in practice through fall camp.

“He just needs to stay on the same track. If he keeps playing the way he is, and we expect him to, it makes our offense pretty hard to stop.”

More numbers reflect that. Nebraska ranks first in the Big Ten in total offense, rushing offense, pass efficiency and scoring. Even though what the Huskers did in a 73-7 victory against Idaho State distort those averages, they’ve shown the elements of a potent offense.

That offense is among the reasons for optimism as Nebraska enters Big Ten play against Wisconsin on Saturday night at Memorial Stadium. Less than three weeks have passed since a 36-30 loss at UCLA, and yet much as changed in the perception of where the Huskers fit in the conference race.

The Wisconsin game will set the tone and initiate a rugged five-game stretch that likely will determine whether Nebraska makes a trip to Indianapolis for the Big Ten Championship on Dec. 1.

After Wisconsin, the Huskers play back-to-back road games against Ohio State and Northwestern, play Michigan at home and then travel to Michigan State.

How they fare during that stretch will depend on more than the play of Martinez, of course. But the junior from Corona, Calif., is a lightning rod for the team’s fortunes.

Pelini was asked if he expected Martinez to continue the passing efficiency of the first four games.

“I fully expect him to go up this week,” Pelini said. “We’ve had to pull back the reins on him a few games. I think he’s going to continue to play well because that’s what I’ve been seeing from him. I have a lot of confidence in him, and I think he’s an outstanding quarterback.

“That’s what our expectations are going forward.”

Martinez appeared to be relaxed at Monday’s weekly news conference, talking about his younger brother Drake Martinez, a running back-safety at Laguna Beach (Calif.) High School to whom Nebraska has offered a scholarship. Taylor expects his brother to be at Saturday night’s game.

“It’s exciting to have him come,” said Taylor.

Regardless of the audience, Taylor is displaying confidence. “Definitely,” senior I-back Rex Burkhead said. “If you’re playing that well, then you should be confident and comfortable. Hopefully, that continues. As long as he keeps playing like that, his confidence will continue to grow.”

Martinez threw only three interceptions after the Wisconsin game last season to finish with eight, compared to 13 touchdowns, for an efficiency rating of 126.5.

This season, as last, “I just think he’s gotten better, and he’s going to continue to get better,” said Pelini. “He’s not at the level that we want him at yet. There’s still a lot out there for him to learn, and I look for him to grow. The more experience he has and the harder he’s working and preparing the way he has been, he’ll keep getting better. I don’t think we’ve seen the best of Taylor yet.”

We might have seen the worst against Wisconsin last season – in Martinez’s estimation, anyway. That was the low point of his Husker career. His answer to the question was anticipated.