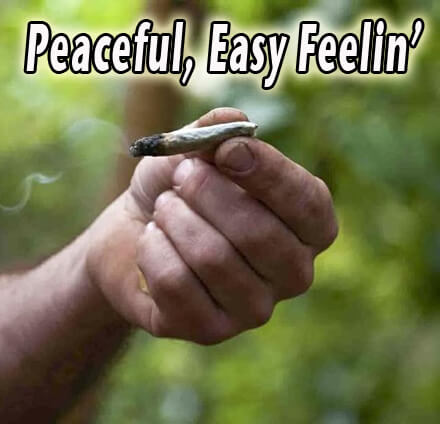 I stopped smoking pot in 1969. Glenn Frey didn’t know that when he turned toward me in the control room of Studio B during the making of One of These Nights. In his outstretched fingertips was a smoldering joint he had just rolled and ignited. “Here, man. This is da kine. Tommy had to go all the way to Tarzana for this.”

“No, Glenn, I can’t smoke that stuff anymore. It gets me too fucked up,” I argued. He looked taken aback. His hand lowered just an inch or two and his eyes narrowed imperceptibly as he gazed through a rising haze. Tilting his head ever-so slightly, he uttered a phrase that catapulted me back to the safe womb of my college apartment and the heady sounds of Traffic on the turntable. He said, “For old times’ sake.”

For. Old. Times’. Sake. A wistful smile crossed my face. I was powerless, nodded my head, took it and toked.

My next conscious thought found me sitting in the corner of the control room, knees pulled to my chest, rocking to and fro. The sound of 2-inch tape gently slapping against the outgoing tape guides of the 3M-79 24-track hammered at my mind. With a heavy sense of drugged panic I stood. I was alone in a now-silent studio. Me, the engineer. The guy who’s supposed to represent the “control” in control room, with not an Eagle in sight.

“Iatrogenic” is a word I learned in high school out of curiosity. I saw it in practice when I worked as a respiratory therapist at a university teaching hospital during my pre-med days. “Iatrogenic” means simply “illness or demise caused by medical treatment.” Reading reports of Glenn’s death, I drew a connection between a depleted immune system and the kinds of drugs used to treat RA. That connection is real and predictable. It would not be a leap to describe Glenn Frey’s death as the result of iatrogenic illnesses.

See, pneumonia, though a serious and sometimes fatal disease, is curable in 95 percent of hospitalized cases — unless there is some other complication that is defeating the body’s natural ability to heal, depressing the immune system. And drugs to treat RA are famous for that. Throw together the presence of intestinal problems (again, something easily caused by medications), the role of the intestinal biome in immunity, RA drugs and pneumonia, and an otherwise healthy 67-year-old has the cards stacked against him.

Several studies have assessed the fatalities caused by medical treatment. One of the broadest, amassing grave amounts of data, gives the number 999,936 as the number killed yearly by medical treatment in the United States alone. These are peer-reviewed meta-analyses that are virtually inarguable. American medicine is too often a dangerous experiment.

Saving lives, too. Make no mistake. American medicine holds out many marvels. There is little better in history when it comes to addressing acute, massive trauma. It’s chronic disease that baffles. And the pharmaceutical industry is a leading culprit in killing. Drugs to address chronic pain or inflammatory diseases, metabolic illness and other conditions, often not even diseases, have devastating consequence. All you have to do is listen to the litany of side effects that take up most of any drug commercial on television. And, of course, one should realize that the US is the only country in the world aside from New Zealand(?) that allows direct-to-consumer drug ads.

Another take. There are viable alternatives to American medical treatment for every illness. It’s senseless to go back and deconstruct the treatment path that Glenn chose. He’s gone. But it’s important to recognize the role that medical choices have in wellness — or in causing sickness and death.

Reductionist medicine, that kind that separates systems in the body to be treated individually as if the “team of doctors” is like an acrobatic troupe balancing plates up in the air, is very often disastrous. It’s more than “the right hand not knowing what the left hand is doing.” Often, the protocols the left hand prescribe contraindicate the protocols the right hand maintains. It’s a trick bag and a slippery slope.

Bob Seger, a musical collaborator, and Eagles manager Irving Azoff, who both were very close to Glenn and the situation he was dealing with, mentioned the pain his RA was causing him. Azoff went so far as to actually say the RA medications were at fault. The choices Glenn made to treat his infirmities were his alone and it’s pointless to second-guess. But that doesn’t make it easier to accept.

In a world that is rapidly legalizing medical marijuana and other alternatives to harsh pharmaceuticals and radical surgical interventions, I wish that this time I could have reached out to offer Glenn something “for old times’ sake.”