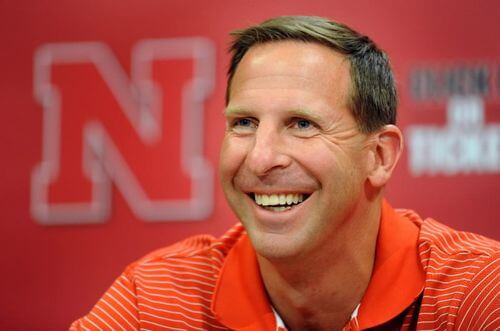 Tom Osborne’s “heart episode” (his words) remained private for a time. He didn’t discuss it at length until three weeks later, when he announced he would be stepping aside after 25 seasons.

The episode was a rapid heartbeat, atrial fibrillation. Initially, “what I didn’t tell  you was that they did have to put me under and they had to shock me to get it back in, which is a little bit more than we had hoped,” Osborne said during the stepping-aside news conference on Dec. 10, 1997.

Later in the news conference, he talked about what might have caused the episode. “It could have been the Missouri game,” he said, in an attempt at levity.

The week before the Iowa State game, the Huskers needed a dramatic touchdown catch by Matt Davison, on a Scott Frost pass that was deflected by Shevin Wiggins, to force overtime in a 45-38 victory at Missouri. The victory preserved a third national championship run for Osborne.

“It probably was the Missouri game,” said Osborne.

Those who attended the news conference in 1997 might have had a flashback during the second half of Nebraska’s 42-13 victory against Arkansas State, when Husker coach Bo Pelini was taken by ambulance to an unidentified hospital for what were described later as “precautionary tests.”

“I just wasn’t feeling well,” Pelini said at his weekly news conference on the Monday after the game. “They (doctors) decided they had to take the cautious approach, which was the right approach.

“I have a clean bill of health. I feel great, no problems.”

Later, Pelini acknowledged that his episode, which wasn’t heart-related, he said, had “alarmed me a little bit.” But he added, given the test results, “I’m not just healthy, I’m very healthy.”

The cause could have been “any number of things,” Pelini said. But not stress. “One thing I don’t want is anybody to make this out to be that I’m overstressed or this or that. I’ve never had one issue. It was an isolated incident. There were a number of factors that probably contributed to it.

“I’m healthy, and there are no issues there whatsoever, because honestly, I wouldn’t be sitting here today. I have tremendous balance in my life. I’m not a really stressed-out person. I’m just not. Probably the biggest stress I have is getting from here to my kids’ games and making sure I’m handling the time here along with the duties of who you want to be as a father.”

Family is first and foremost for him. That’s apparent, even to the casual observer. As for the stressed-out part, his sideline behavior might, sometimes, be interpreted otherwise.

In any case, as had Osborne, Pelini provided some levity by referring to the third quarter of the Arkansas State game when the Red Wolves scored a touchdown to cut the deficit to 28-10 and were in position to score another, before being forced to settle for a field goal.

“I’m glad I wasn’t watching . . . because then I probably would’ve had heart problems,” said Pelini.

His absence from the sideline in the second half was the game’s main storyline, for obvious reasons. As with every coach, and particularly those in high-profile programs, the pressure is considerable. And the Huskers’ 36-30 loss at UCLA the previous week revealed the degree of the pressure on Pelini.

That he was persuaded to remain in the locker room at halftime and then to be taken to the hospital in an ambulance underscored the concern and potential seriousness of the matter. It reached a point at which “I didn’t have a choice,” Pelini said. “They told me what I was going to do.”

If not for being told, he might not have done the right thing – what he did.

The Osborne episode was different, of course, with the context of his heart by-pass surgery a dozen years earlier, near his 48th birthday. Pelini will turn 45 in December, by the way. Plus, Osborne was able to keep his late-night trip to the hospital private, something Pelini couldn’t do.

“Obviously, if you know me, it wasn’t something I wanted to do,” Pelini said. “Like I said, there comes a certain point where if they don’t like something, you have to listen to what they say.

“They’re the experts, not me. It’s nothing to apologize about. First and foremost is that you want to be healthy and you don’t want something to happen that doesn’t need to happen.”

The point, precisely, and a good coaching decision, even if it wasn’t entirely his.