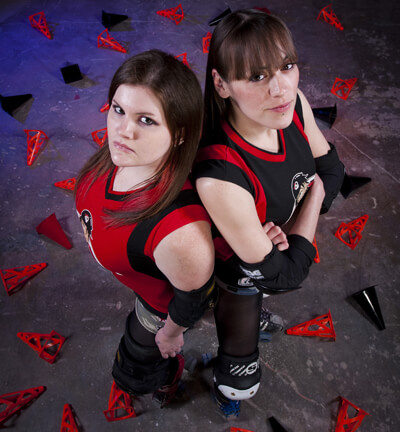 The Omaha Rollergirls suit up for a bout in much the same gear as any athlete: kneepads, helmets, mouth guards … fishnets. OK, so that last bit of garb isn’t standard in the sports world, but it’s a fitting component of ORGs’ stunning cocktail of sport and style, skill and spectacle. Visiting their bunker at the old Cheap Skate near 90th and Maple for a practice/scrimmage it’s clear that while the skaters’ tattooed-rocker-meets-retro look is hot, their derby names hilarious and their pin-curls on point, the aesthetic is only as bangin’ as the fierce athleticism. Angela Parker, an Air Force unit program coordinator who skates as Alice D. Tripp, is a new skater in 2011, but she’s refereed in previous seasons. “It’s fun, fast-paced. It’s kind of like chaos on wheels. I’ve always been an athlete and so it’s great to be able to do this,” says Parker. Roller Derby has kitschy origins but ORG plays the real deal, full-contact, competitive sport on quad roller skates and a flat track — as opposed to the banked-track style seen in 2009’s Whip It. Regulation bouts are two 30-minute periods broken into two-minute jams. Five players from each team hit the track, each with one pivot, one jammer and three blockers. Jammers wear starred helmets, start at the back of the pack and fight their way to the front to score points for each member of the opposing team they pass, or lap. The pivot sets the pace at the front of the pack and acts as the last line of defense. Blockers keep the pack thick and tight in the middle, checking and bumping to keep the opposing team’s jammer at the back and also assisting their own jammer to the front. The AAA team plays a shorter bout of two 20-minute periods ahead of the main event. ORG PR Director Jenifer Pirrone, retired from skating as Soul Crusher Sally, says it gives the “newbies” a chance at for-real game play. ORG also practices for two to three hours, three to four times each week. They host an annual Boot Camp (2010’s spanned 12 weeks) to vet prospective members; and while Parker asserts derby is harder than it looks, both she and Pirrone welcome women to try out. “It’ll change your life. You find out what you’re really made of,” says Pirrone. Anyone questioning the legitimacy of derby as a “real” sport need only witness ORG in action to become a believer. “I work with all guys, so they see short shorts and cute girls and think, ‘Oh, I want to go for that.’ Then they come and see that we’re actually athletes, we work hard at this and it’s a real sport, then they get drawn into it,” says Parker. ORG began as a grassroots effort in 2006, and after an early incarnation with two local teams that played each other — the Low Down Lucy’s and Victoria’s Secret Service — brought the best of the players together to form the Omaha Rollergirl All-Stars. In November 2008, ORG joined the Women’s Flat Track Derby Association (WFTDA). The league’s growth was as swift as a cunning jammer and its popularity proved explosive. The 2011 season brings more watershed moments as ORG upgrades its venue from west Omaha’s Skate Daze to Council Bluffs’ Mid-America Center. The league needed more space to accommodate its swelling fan base, some of whom they’d had to turn away from sold- out bouts last season. After feedback from fans ORG knew they had to make a move. “I’m kind of stunned,” says vet Megan Martin, a forecast analyst for Oriental Trading Company and ORG coaching director who skates as Midlife Crashes. “Everything happened this year. We got our own practice space, we doubled our league with the recruit process and now we’re skating in an arena. It’s so rewarding that we’ve come this far.” “We were in a position financially to swing it, and decided to take the leap,” says Pirrone. ORG dues finance practice and performance spaces. Pirrone says the league searched Omaha but got the best deal at MAC. Even with their own tight purse strings ORG gives back to the community, raising funds at events like Relay for Life, Polar Bear Plunge and an upcoming Wheels and Reels movie night at The Waiting Room where they’ll collect donations for Film Streams. Tina Stading, who works in financial aid at UNO and skates as Gracie Gloom, says she loves everything about the sport, the fun, the physicality, but mainly the sisterhood. “Finding a group of girls that are just like me was really awesome,” she says. “Derby becomes your second family,” echoes Parker. “Everybody has different jobs and backgrounds, but we all kind of have the same attitude and respect for the sport.” Derby also does wonders for the ladies off the track. “When you get involved in such a physical sport you really know what you’re capable of, so you start thinking about yourself differently and you feel like you’ve really come into yourself,” says Stading. “For my 39th birthday I bought skates and gear and re-learned how to skate, which was terrifying at first,” says Martin. Her jersey number is 39 in honor of her age the year she began. “All of the skills developed in roller derby are amazing: smarts, endurance, agility, speed, strength.” Newbie Shawna Eves, traffic manager at Redstone who skates as Shaw No Fear and was just added to the AAA roster, has reaped the same rewards. “It has been a blessing to develop an athletic skill I didn’t even realize I was capable of, finding an inner strength to mentally keep pushing myself and, in the end, becoming part of a new family of strong, independent women.” Omaha Rollergirls’ home opener is Feb. 19 at the Mid America Center in Council Bluffs, versus the Fox Cityz Foxz (Appleton, Wisc.). The AAA bout begins at 7 p.m. followed by the All-Stars. Doors open at 6 p.m. Tickets are $10 advance/$12 day-of. Visit omaharollergirls.org.