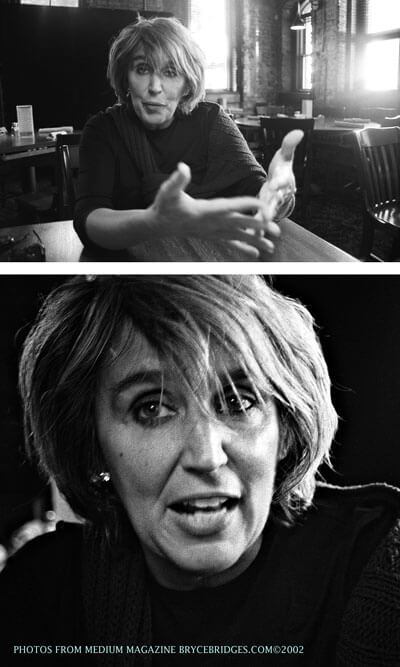 Interview with Gail Risch, who teaches in the department of theology at Creighton University, including the classes Christian Ethics and Theology of Christian Marriage. From 1995 until its closure in 2009, Risch was a researcher with the Center for Marriage and Family at Creighton. She has a particular expertise in sexuality and its place within marriage and marital stability.

What books or websites would you recommend to people interested in cultivating healthy relationships and intimacy?

If I had to boil it down to one, ‘The Good Marriage: How And Why Love Lasts’ by Judith Wallerstein and Sandra Blakeslee. My reading list for my students is like 250 books long, but most of them are more geared toward theology, specifically Christian theology.

What are the top things people should know about healthy relationships and intimacy?

Healthy relationships always involve communication skills, the ability to resolve conflicts, and commitment to the relationship/marriage. This last one is particularly important in our society; our society is hugely individualistic: it’s all about me and if I’m not happy, I’m out of there. That’s the attitude toward marriage or relationships, and that contributes to the highest divorce rate in the Western world. But then we get back into relationships, back-and-forth, back-and-forth. There is a book that addresses that and does explain our culture, and it’s called ‘The Marriage-Go-Round’, written by a social scientist (Andrew Cherlin). Basically, his bottom line is: Slow down. Most people in the United States don’t understand that we’re different from all Western cultures in how often we enter relationships and how often we exit them and that is why we have the highest divorce rate. Individuals in our culture are very committed to their own self-satisfaction and that can make or break the relationship/marriage: they have this attitude that ‘I’m all in this as long as I’m happy.’ Overall, individualism is driving our relationships and not in a positive way. The couple needs to be committed to the marriage and relationship more so than committed to themselves, they have to learn that healthy balance.

What are the top misconceptions about relationships and intimacy?

What do you tell teenagers about sex?

Here in the Midwest, that’s still a volatile issue, because we still have a lot of families that say, ‘No, you cannot talk to my son or daughter about that.’ They’re afraid that if you give these kids all this detailed information, then they’re going to go out and do it. And research says, not at all! If the goal is that we want them to think critically about their sexuality, then we have to give them the information about which to think. We have to nurture their critical thinking in terms of sexuality as well.

It has to be age-appropriate, always. And then that always has to be interpreted: What is age appropriate? It’s case-by-case sometimes; it’s not just because somebody’s in seventh grade they should get this information. Maybe somebody in sixth grade is ready for it, but maybe somebody in eleventh grade isn’t. It’s touchy and difficult. But generally speaking, my personal thought is that if some information is over their head, it will just go over their head; gone, done. If they would hear something that does in fact connect, then it will connect or it will be filed away and will reappear at such time that it is important or useful to that person.

Think about three-year-olds and four-year-olds regarding anything—we don’t say, ‘I can’t tell you that because you’re only three.’ We have all kinds of conversation with little people but we know darn well they’re not connecting and they don’t ‘get it,’ but that doesn’t stop us from including them. So the argument that ‘I don’t want to confuse them’ is baloney and so is the argument that if you tell them, they’ll go out and do it. No, they will not and what I’m telling you is based on research.

I have great faith in our youth. I don’t go forward with fear and I have great confidence in them. I’m very positive about young people.

What do you think is the most romantic music?

It’s generational. Soft background music might be romantic to me, but a younger generation might say, ‘that’s elevator music.’

You know when your relationship and intimacy are healthy when ___________?

There’s mutual trust, mutual respect and you have a sense of being a team. The word ‘mutual’ is very important.

How has communication changed regarding dating, relationships and sex from past to present?

I think technology has enormously changed communication in that we communicate so much more frequently. I would complain that it’s too casual and is not thoughtful communication these days. Somebody years ago had to sit down and write out a letter and they had to put a great deal of thought into that and choose their words carefully. Now, with texting, it’s using phrases—not even whole sentences—it’s very casual and I think that’s to the detriment of true communication. Too casual, too quick. I’m not a fan.

There’s no context around it. Everything needs to be interpreted, but if you’re standing face to face you have a context, you’re looking at each other. Even on the phone you hear the fluctuations in their voice. That’s all eliminated if we use technology. I’m weary of that technology. I use it also, but I think the danger is when people post things that have no business being posted, whether it’s a phrase, a sentence, a message, a photograph or a video. No thought has been put into it.

How do legal and privacy issues affect the way people approach modern relationships?

We have so very many poor examples, things that make the evening news, about celebrities and famous people who are very poor examples of how to communicate responsibly and in a healthy fashion. Maybe our young people need—maybe everybody needs—good examples. Parents today with young kids—whether that means 9 or 18—that’s a whole new dimension of parenting that brings up a lot of fear and trepidation, like ‘At what age does my son or daughter get a cellphone?’ and ‘Does it have a monitor on it?’ and the Internet and all of that. It’s a whole new facet of parenting that people have to face. There have to be certain guidelines, parameters, it’s not a free-for-all. Hopefully they have good role models in their parents and family as to what’s proper communication.

That’s doesn’t mean that younger people aren’t just going to do their own thing, because their friends’ influence is very powerful influence. I teach moral theology, too—(the teenage brain) is not developed yet, they’re literally not yet capable of making good moral judgments. They’re working on it, but that part of them is not yet developed.

Multiple partners? No. Here in the Midwest, everybody’s opposed—young people and old people are into fidelity. To be betrayed by the person with whom you think you have a faithful relationship; that is horrible. They’re all open to cohabitation, though, in the U.S. and here in the Midwest and across religious denominations, especially if it’s leading to marriage.

Absolutely yes. I would say that people are increasingly comfortable talking about this; it’s not like a secret you have to keep hidden away. In my classroom, my gay and lesbian students come to a place where they are comfortable talking about it in the open in the classroom. I’ve seen that develop over the last 15 years. I have to establish a safe classroom and once they know who I am, they’re safe to say and write…But that would apply in any context, whether it’s the neighborhood, their churches, or with friends and family. I often use the word ‘partner’, but it’s coming to the place where we can say ‘spouse’ and that’s where we are crossing the boundaries of same-sex and heterosexual marriage. That is still a huge, huge issue in my classes. Young people all are for it and very supportive. Many of them see it as a justice issue; they ‘get it’ that you’re born—you don’t make a choice about—your orientation. And there’s no question in a young person’s mind, especially if they’re educated. That’s very different from their parents and grandparents.