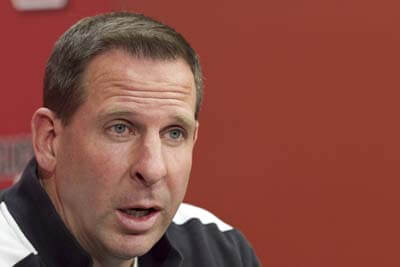 When the history of Bo Pelini’s tenure as head football coach at Nebraska is written, the 2011 Penn State game will figure prominently. It will say Pelini never stood taller.

Yes, the Huskers won the game, 17-14, on the road, against a Penn State team that had lost only once. But Pelini has coached many victories during his four seasons. And he’ll coach many more.

What distinguished this game above the others, and those to come, were his words afterward. “Going in, I didn’t think the game should have been played,” he said.

And because of that he was conflicted. During the week leading up to it, “there were times when I felt like, ‘Here, I’m telling my football team to ignore what’s going on because we have a game to play; we have to focus on what we’re doing,’ ” said Pelini.

“My job, my No. 1 job is to educate and to talk to them about it and put focus on what we know and, so, they . . . so these young adults learn from the situation.”

The situation is well documented, alleged sexual abuse of young boys by former Penn State defensive coordinator Jerry Sandusky and the failure of others to do the right thing in response.

Among those others was legendary coach Joe Paterno, who was fired as a result.

“I don’t know the specifics of the situation, and I’m not judging anybody. But the fact is, young kids were hurt,” Pelini said. “It’s a lot bigger than football. It’s a lot bigger than the NCAA, the Big Ten or anything else. That’s why in the end, going in, I didn’t think the game should have been played.

“But with it being played, I thought that kneeling down and praying, and both teams coming together, was the right thing to do, and hopefully, that in itself made a statement.”

Prior to the opening kickoff both teams went to midfield and knelt in prayer, led by Husker running backs coach Ron Brown, a “pretty obvious choice,” according to Pelini.

The reaction in the 48 hours following was consistent. Those he encountered “were just in awe,” said Husker I-back Rex Burkhead. “I thought  Coach Brown did a tremendous job getting us all together. Normally in those games you have that tension between the two teams going head-to-head.

“Just to come in, say hi to each other and ask the other players how they’re doing before the game kind of eases all the emotion and distractions before the game. I thought that was an awesome deal. That was something I’ve never been a part of and something I thought was pretty cool.”

Nebraska linebacker Will Compton said people had “nothing but good things to say. Everybody talked about the prayer in the beginning being first-class, which it was.”

Said Husker safety Austin Cassidy: “I said after the game that I didn’t know too many people that’d probably remember who won that game. Stuff like that, that happened before the game, that’s going to be remembered forever. I think it was just a good sign by both of the teams to let the victims know and let other people know that there’s stuff bigger than football and bigger than us. They’re in our hearts and they’re in our prayers. I was glad we did it. I think everyone was glad we did it.”

That didn’t change what happened on the field. The competition was no less intense. “As far as I could tell, it was a normal game for the 60 minutes we were out there,” he said.

Cassidy was right, no doubt. What happened before and after the game will be remembered long after the score is forgotten. Even so, that doesn’t diminish what the Huskers accomplished on a sunny, breezy 50-degree afternoon before a crowd of 107,903 at Beaver Stadium.

“I’ve said it and believe that our team has a lot of character and want-to,” Pelini said during his weekly news conference on the Monday after the game. “I give them a lot of credit. I gave them credit after the game for how they were able to play. It was a well-played game. It was a hard-hitting and physical football game. It’s a good one to come out on top.”

But it was still just a game, in a situation, as Pelini described afterward as “bigger than the young men in the game who would have missed it had they called it off.”