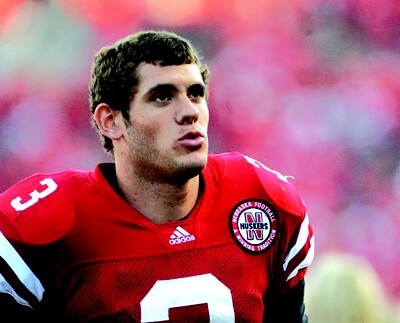 Taylor Martinez had to pause and laugh while complimenting his teammates following Nebraska’s 34-27 come-from-behind victory against Ohio State.

As he was saying how proud he was of the team, he leaned forward and laughed.

The immediate cause was teammate Ron Kellogg III, a back-up quarterback who was standing behind the bank of cameras and reporters on the edge of the weight room.

Teammates often try to elicit reactions from each other during post-practice interviews but rarely post-game. So this was out of the ordinary – and entirely appropriate, considering Martinez had come through a difficult week to lead the biggest comeback in school history. He needed to laugh.

Just over 4 minutes into the third quarter, the Huskers trailed 27-6. In the next 20 minutes, and specifically during a 17-minute stretch, they scored four touchdowns, one on a Martinez run and two on his passes. Rex Burkhead scored the fourth with 5:10 remaining.

“It was an amazing game,” said Martinez, who passed for 191 yards and rushed for 102 yards to earn recognition as the Big Ten Offensive Player of the Week.

In the week leading up to the game, Martinez had shouldered much of the blame for the previous Saturday’s 48-17, Big Ten-opening loss at Wisconsin.

He was criticized by fans and media, as well as by other students, including one in his Spanish class, according to teammate Yoshi Hardrick. The senior offensive tackle said Martinez was weary of the criticism. Redshirted freshman wide receiver Kenny Bell tweeted (@KBellJr80): “Next person to say anything about my QB to me, i’m slapping in the face. No warning. #tryme.”

Coach Bo Pelini chastised reporters following Thursday’s practice. Asked if he appreciated how the team had rallied behind Martinez, he said: “I’m not following you. What do you mean ‘rallied behind him?’ That’s what teammates do. I don’t quite understand the media onslaught.

“That’s for you guys to answer.”

A follow-up question, including “unfazed,” drew an even more irritated response from Pelini: “What? Are you guys trying to get a reaction from him? Is that what you guys are trying to do? I’m just wondering, is this a . . . you know, you guys are asking me. Is this a deliberate thing?”

That Pelini was passionate in his support of Martinez was no surprise, nor was his ire directed at reporters, one of whom suggested Martinez had seemed bothered by the week’s criticism.

“He’s human,” said Pelini. “You guys are the ones who should be bothered by it.”

The media issue was resurrected near the end of Pelini’s interview session following the game, with one reporter in particular, but only after Pelini had praised his sophomore quarterback.

“Taylor played his butt off,” Pelini said. “That guy . . . he’s one of ‘em. He’s one of the leaders on the team. I’m proud of him. Everybody wants to doubt him. You guys can choose to write whatever you want and attack him, like the fans will. Now they’ll praise him. But I told him, I said, ‘You’re not as bad as you think you are. You’re not as good.’ There’s a lot of things he can do better out there tonight, but he kept fighting. He led the team. He played a heck of a second half. I’m proud of how he responded, how he played. And that’s why he’s the starting quarterback right now.”

At the end of the first half, after Martinez had thrown an interception, there was a smattering of boos. By the fourth quarter, however, there were only cheers. “The crowd did an amazing job,” said Martinez. “I think that was the loudest I’ve ever heard the crowd in the beginning of the game.”

And, he added: “I think they played a huge part at the end of the game.”

Martinez was asked about the criticism and if he felt vindicated.

But did he feel vindicated?

At about that point, he leaned forward and laughed. The last laugh, you might say.