Home » Specials » That Was the Year That Was 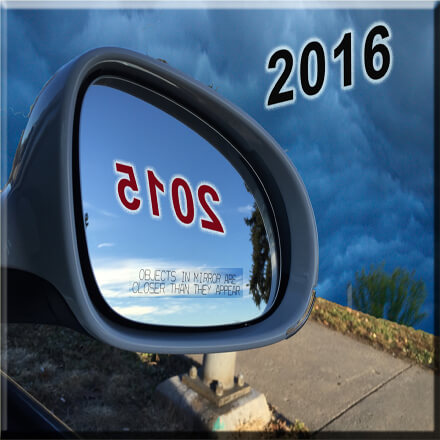 When these end-of-year retros come around, I feel like I’m turning into a whiner about all the crap that happened in the past 12 months. It’s so easy to come up with the foibles and follies that hit the news stream over the year. But I end up resigned to the reality that if we don’t know the problem, we can’t fix it. Am I whistling in the wind and ignoring the “If you spot it, you got it” axiom of the New Age? So let me start with a positive notice from 2015 and we’ll set sail from there. In the rear view mirror:

May: the Pope steps up. What a development. His Holiness has become St. Greenpeace. In May, the Vatican published Laudato Si, Pope Francis’ papal encyclical urging all the planet to work in concert to “protect our common home.” 2015 isn’t the first year Francis has spoken about our obligation to save the planet but he has come up strongest when the chips are all on the table. His encyclical is devoted entirely to the holistic environment in which we all live and the scriptural dictum that has informed religions for millennia. The message is clear when the Pope describes the world “at the limits of suicide.” Environmental issues and human danger to the planet have been discussed for most of the past 150 years with little movement away from profit-motivated greed. With criteria for Catholic sainthood including performance of three miracles, if Francis can get governments to actually do something about our damaged environment, he’ll have a leg up on his first.

Bold over: Keystone pipeline plugged. The cause célèbre of fabricated activist group Bold Nebraska was shot down by President Obama in November ending a years’-long battle among greasy Nebraska politicians, ethical environmentalists, opportunistic activists, citizens, Nebraska landowners, Native Americans and corporate interests on both sides of latitude 54°40’. A combination of conditions have led to a slowdown in scraping dirty shale from the earth’s crust both in Alberta and North Dakota and the apparent demise of the Keystone XL is one. A win for the planet.

Soda Wars: Bye-bye bubbles. Remember the cola kerfuffle when New York mayor Michael Bloomberg tried to ban jumbo sodas? He lost. Cities across the nation tried so-called “sugar taxes” in an attempt to curtail Americans’ sugary slide into obesity. Only San Francisco prevailed. Big Soda and the Sugar Cartel won every battle. But guess what? They’re losing the war. Sugary soda consumption has dropped so much that the New York Times called the decrease, “the single largest change in the American diet in the last decade.” 2015 saw the lowest per capita soda consumption since 1985. Water is gaining and almost equal. Now, if we could just get people to stop paying Coke and Pepsi for bottled tap water and consequently stuffing landfills and the oceans with 55 billion plastic bottles each year.

The North poll. Canadians have spoken. They have elected their version of Robert F. Kennedy, Jr. in sending Justin Trudeau to Ottawa as their new Prime Minister. Trudeau is the liberal son of former Canadian Prime Minister Pierre Trudeau and former Rolling Stone groupie Margaret Trudeau. Not one to deflect by saying, “I dabbled in my youth,” or “I didn’t inhale,” Justin has admitted smoking dope as recently as 2010. It’s no surprise then that Trudeau has ordered his administration to begin formalizing the infrastructure necessary to legalize marijuana across all of Canada. Polls have shown that 70 percent of Canadians favor decriminalizing pot. When Trudeau’s directive results in legislation, our northern neighbor will become the first industrialized nation to make pot legal. That’s “huge” as The Donald would say.

Shake it up. Speaking of The Donald, the most radical event in national politics in 2015 has been the emergence of unfettered political buffoonery featuring Donald Trump. It’s an astonishing turn of events that is unparalleled in American history. Presidential politics has been a corporately paid-for, made for television reality show since that B-movie actor left Sacramento and one-liner’ed his way into the White House. But history will swoon when looking back on the 2016 race playing out. Trump has turned the joke of presidential politics and its corrupt electoral system into a complete farce. The significance of his mobilizing the angst of a broad swath of the agitated white middle class is important. The impact of social media as an emerging electorate and trend setter is demoralizing. It’s entertaining, for sure, but underneath is a depressing view of how broken national politics has become. If Trump’s stagecraft shakes it up, it will be worth it. Trump didn’t break it but he may reveal how screwed up it is.