Home » Specials » The audience takes over 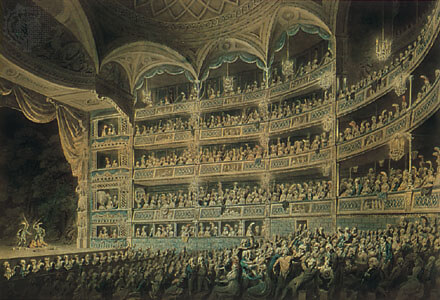 The future of theater will be very different from the present. Instead of the quiet temple of performance we now experience, it will be a noisy, active space, with audience members visible and openly interacting with the play. Audiences are now discouraged from doing anything other than applauding at the end of the play, but in future performances they will be able to express disapproval even as the play is going on. Audiences will be able to shout at the stage, talk to actors, use cell phones, and even sit on the stage and talk, and it will all be considered completely normal.

This will, in fact, not be a radical new innovation in live performance, but a return to traditions that existed for thousands of years, in which audiences were as much a part of performance as the actors. It will mean that live theater will have to be more flexible and anarchic than current theater, but it will also be more exciting for audiences, and much more popular.