Home » Specials » Why not Creighton? 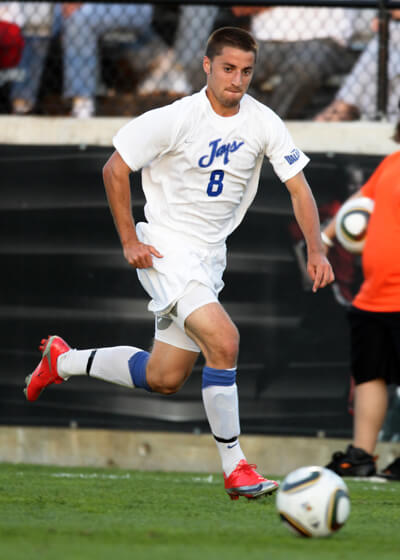 Tucked in among the few remaining warehouses in a formerly industrial part of Omaha, just north of downtown, is one of the most efficient football factories in America. Creighton soccer turns out winners with mechanical precision. If not for that other factory down in Lincoln – which produces a brand of football preferred by the locals and sold nationwide – the Bluejays could be the most successful college program in the state.

Maybe they already are. Since 1992 the Jays have made 18 NCAA tournament appearances, including 17 straight between 1992 and 2008. They’ve made it to the College Cup – soccer’s version of the Final Four – three times. CollegeSoccerNews.com calls Morrison Stadium the “most exciting venue” in the country. In ten of the last 11 years Creighton has had at least one player on the Hermann Trophy watch list, college soccer’s Heisman Trophy.

Bob Warming built most of that, reviving the Creighton soccer program in 1990 before leaving to coach Penn State after the 2009 season. Enter Jamie Clark, one of college soccer’s hot young talents. In year one he took Creighton to the NCAA tournament and it looks like the Jays are set for the foreseeable future. Then Clark abruptly left for Washington. Two talented coaches lured out of Omaha by bigger athletic departments, bigger budgets and a bigger national profile across all sports.

That’s what makes the arrival of Elmar Bolowich in Omaha so interesting. He went the opposite way to become Creighton’s new head coach. In 22 seasons at North Carolina Bolowich took the Tarheels to four College Cups, including the last three seasons, and won a national title in 2001. He had the big athletic department, the big public university budget and all the resources he needed to keep UNC soccer humming until his retirement. So why did he decide to come to Creighton?

Bolowich, a native of Edenkoben, Germany, lets the somewhat cryptic answer hang there for a bit. The answer is a question of the question itself and it’s a good one. Why not Creighton? As in, what’s stopping this place from being not just one of the best, but the best soccer program in the country?

This season there’s nothing stopping them. Creighton is as deep, talented and experienced as any coach could want. The Jays return their top six scorers from last year and are ranked in the top 10 in all three major preseason polls. Six Bluejays were selected to the 11-man all-Missouri Valley Conference preseason team. Senior forward Ethan Finlay and sophomore defender Tyler Polak both landed on the preseason Hermann Trophy watch list. Senior goalkeeper Brian Holt already has the most career shutouts in school history and he has a full season left to play.

Bolowich says the Jays have the talent to “play with anyone in the country.” A preseason trip for two exhibition games in Indiana backed up his claim. The Jays drew 1-1 with defending national champion and preseason No. 2 Akron. Two nights later Creighton played No. 12 Notre Dame to a 2-2 tie. They were only exhibitions, and draws at that, but expectations didn’t get any lower based on those results. But Bolowich, who’s been on successful championship runs before, knows there’s more to it than talent.

“Soccer can be a very cruel game,” Bolowich says. “You can dominate a game and yet you can still lose it. You have to have a little bit of luck with injuries.

That’s something that hasn’t gone the Jays way early in the preseason. Finlay, the MVC Player of the Year and the Jays leading scorer last season, was slowed by a knee injury early during fall camp and missed the exhibitions against Akron and Notre Dame. So did All-MVC forward and leading assist man Dion Acoff. Both hope to be back for Creighton’s season opener at Denver University on Aug. 27.

Playing even with the Zips and Irish despite those losses bodes well for the Jays’ overall depth. Junior midfielder/forward Andrew Ribiero, playing upfront due to Finlay and Acoff’s absence, started the season on an electric note, scoring the first goal of the season on a bicycle kick off a pass from returning starter Kris Clark. Junior midfielders Jose Gomez, who scored twice against Notre Dame, and Greg Jordan are back after all-conference seasons last year. And 2010 MVC Freshman of the Year Tyler Polak anchors the defense alongside seniors Andrew Duran and Jace Peters.

The Jays have the benefit of experience at every level but also welcome 18 newcomers with some exciting options for Bolowich in his first season.

Freshman defender Eric Miller arrived in January to take part in spring practice and has trained with the U.S. Under-18 national team. Junior Jake Brown enrolled early after being a full-time starter for St. Louis University the past two seasons and provides Creighton with another option in back. Freshman goalkeeper Taylor Reeves, a high school All-American at Creighton Prep, returns to Omaha after a red shirt season at national powerhouse Indiana and, at 6-1 and 185 pounds, adds some size for the Jays in goal.

It’s a rare mix of experience and talent, particularly for a first-year coach, but internally Bolowich is doing his best to manage expectations.

“I’m not talking much about winning, College Cup appearances or national championships,” he says. “What I talk to the team about is ‘Let’s put ourselves into a position to win every game.’ The goal is to get better every day.”

It sounds like coachspeak but in this case it’s the truth. The goal for Bolowich is to make Creighton a better program. Given the program’s history, “better” means College Cups, more wins, national titles, all the things Bolowich is hesitant to talk about.

Instead it exists as a question full of possibilities: Why not Creighton?

The Creighton men aren’t the only team with a ton of returning experience. Head Coach Bruce Ericson might have his most talented team in 13 years at the helm. The Jays return nine starters from last year’s MVC tournament and regular season championship squad. Reigning MVC Player of the Year Brittney Neumann is back after scoring 9 goals last year, a feat matched by junior Andrea Zuniga, who led the team in overall scoring last year with 27 total points. Lauren Cingoranelli returns after tallying 8 goals and 6 assists and earning MVC Tournament MVP honors in an impressive freshman season. Defensively, Creighton will be led by seniors Macy Mauer, Kelly Connolly and Kat Wright, as well as a pair of dynamic goalkeepers in senior Alicia Montgomery and junior Katie Jo Swanson. The duo combined for 10 shutouts last season. Creighton was chosen as the preseason conference favorite in the MVC coaches poll.

Football fans’ loss was soccer fans’ gain as the University of Nebraska at Omaha added soccer this season as part of the school’s move to Division I athletics. Head Coach Jason Mimms returns to Omaha after spending one year as an assistant under former Creighton coach Bob Warming at Penn State. Mimms had spent the previous 10 seasons as an assistant at Creighton and knows the local prep soccer scene well. The Mavs will have a young, local flavor in their first season with 15 freshmen, four sophomores and 17 total players from Nebraska. The team’s first official signing was a big one as Mimms lured Logan Mendez, the state’s leading high school scorer last season for Grand Island High, to campus. The Mavs will have to be road warriors – they play just three home games. Number 24 UC Irvine visits Aug. 28 to open the season, and the Sept. 23 match with Mercer at Werner Park is sure to be a unique experience for area soccer fans.

Like the men, the UNO women will have a season full of road trips as they make the transition to Division I. Head Coach Don Kolsterman was able to schedule more than half of the Mavs games against Division I opponents and four games against future Summit League foes. “Our players will get a good idea of what type of competition awaits us in the league next year,” he says. Junior forward Danielle Archuleta returns for the Mavs after tying for the team lead with 6 goals last season. Junior Monica Bosiljevac will anchor the midfield after starting 17 games in 2010. Sophomore goalkeeper Katelyn Tschida will get her shot in goal after appearing in six games as a backup last year.