Home » The Buzz » Dance, Drink & Repeat at The Gatsby

I tend to give myself credit for having an above-average memory, and this might sound like I followed the bar trend from an early age, but I remember a time when Omaha really didn’t have a lineup of cocktail bars.

Omaha is known for ranking in the top 10 cities for most bars per capita; but, historically, most of those bars have tended to be average neighborhood dives that served, or still serve, your favorite domestic beer on tap and cheap well drinks. But over the last few years, I have noticed that as an old neighborhood bar closes, the new one that replaces it is more likely to be an elevated-cocktail lounge.

Speak-easies have also multiplied on the Omaha bar scene, welcome additions with their own cocktail-lounge heritage. (Speak-easies were secret clubs where illegal alcohol was sold during the booze-ban days of 1920-1933. Thanks to the 21st amendment, the U.S. was able to continue its boozy tradition and Americans have long enjoyed their brews and liquors out in the open, but this is for a future Buzz article).

This growing Prohibition-era/cocktail-bar influence has introduced Omahans to cocktails they might’ve heard of but never had the chance to try. It really is an exciting time for cocktail aficionados to exploit our new Omaha libation scene.

Obviously, when you hear the name Gatsby, you think of F. Scott Fitzgerald’s masterpiece, but for those of you who haven’t read the book, the 2013 movie, The Great Gatsby, offers a visual voyage into the style, glitz and glamour of the Roaring 20s. The film helped spark a resurgence of that style, and its popularity is likely to continue into the next 20s decade.

Omaha’s newest and most intricately designed bar yet, The Gatsby Social Club, was originally slated to open in 2013, but plans fell through. So, Jake Gardner, owner of The Gatsby and its neighbor, with which it shares an entrance, The Hive, a bar/rock club on 1207 Harney St., decided to marry the two. “Think two uniquely fitted bars in one venue,” he said.

“We wanted to give our patrons a forward-thinking, Prohibition-style bar while still being able to include our Hive stage and dance floor, all the while having a big party atmosphere that is aligned with that Roaring 20s theme.”

Gardner closed The Hive on October 28 to undertake the revamping, which involved keeping The Hive’s dance floor but turning its bar into The Gatsby . “We were ready to open after 90 hours of redecorating,” Gardner said. “It was exhausting to say the least, but we got it done.”

The Gatsby’s soft opening was held over the first two weekends in November, and the bar had its official grand opening November 15-16.

I got to The Gatsby right before the crowd started to roll in on opening night. Walking into the front entrance of the social club, old and newcomers can see from its front window that the social club already sparkles. The bar is brightly lit with ornate glass chandeliers. The new floor shimmers with a black epoxy slate and sprinkled gold flakes. In one corner, two throne chairs grace the front window and sit directly in front of the bar. (Premier seating is a hot commodity as all of you know when standing in line for a drink.) A giant Gatsby sign is perched above a large, wooden mantle with glass bottles of liquor catching the light from the chandeliers. I couldn’t help but think: If you want to give a bar a facelift, this is how you do it.

Liquor lockers, a new concept for the bar, are nestled right by the wall close to the throne chairs. Gardner said he had seen the concept in bigger cities, like D.C. The liquor lockers allow patrons to purchase a bottle of their choosing and store it overnight for future use.

Stairs, which are close to the main entrance, lead up to what is sometimes designated as a VIP area overlooking The Gatsby’s bar and The Hive’s dance floor. The back wall is lined with art deco wallpaper designed by Christine Martin, set designer for The Great Gatsby movie.

Is this bar Gatsby enough for you yet?

“I love how much the party vibe of the 20s, The Great Gatsby book, movie, whatever you get your memories from that era, were romanticized,” Gardner said. “We are coming up on some landmark anniversaries in this new decade of the 2020s. We are also coming up on 100 years of the suffragette movement, and we just celebrated the 100th anniversary of Prohibition this past October. This is some historic stuff.”

The Gatsby’s cocktail menu draws from the speak-easy heritage of the Prohibition era with standard cocktails, such as the classic cosmopolitan, which is a must-have. Obviously, a fruity drink with the perfect kind of punch, this cosmo is served straight up with a lemon twist as garnish, and it has the perfect ratio of ice that collects right at the meniscus.

Other drinks include a hearty Old Fashioned served with an ice sphere to minimize diluting and even champagne on tap for mimosas, which will later be featured on the menu.

“What we are hoping to accomplish with our cocktail menu is to serve up those classic drinks to our customers” at a faster pace, Gardner said. “We also want to be able to go off the menu, and we are planning to feature variations on our classic cocktails.”

I highly recommend trying the Peanut Butter Chocolate Old Fashioned that is made with a relatively new liquor, Skrewball Peanut Butter Whiskey.

The Gatsby will also serve light snacks and appetizers in the near future. “The food will mostly be charcuterie,” Gardner anticipates. “I hope that this adds to the culture of having people who work in the downtown district come in and have a drink and a light snack after work.”

Bottoms Up: What sets The Gatsby apart from other Prohibition/Roaring 20s bars in Omaha is the fully immersed experience it gives to its patrons. It’s all in the details with this one. Peeps, get your best flapper outfit on, and start practicing the Charleston, because you are not going to want to miss the newest party down in the old market at The Gatsby Social Club. 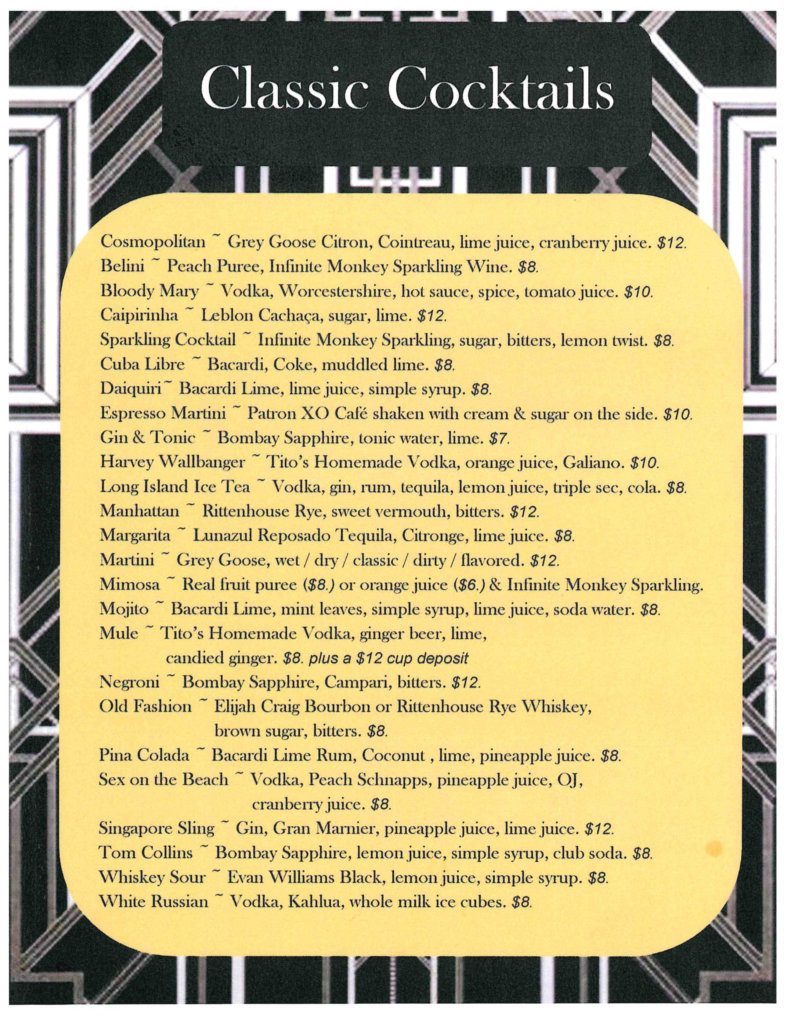