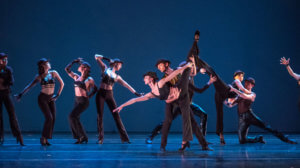 “We didn’t skip a beat,” said Overturff, who is now AMB’s artistic director and CEO. “It was just a moment for somebody to step up and say let’s start a company and keep professional dance alive here.”

The company’s ballet master, Matthew Lovegood, also came from OTB, and its core of dancers, artistic-administrative staff and volunteers goes back a ways. That stability has been important to solidifying the organization. 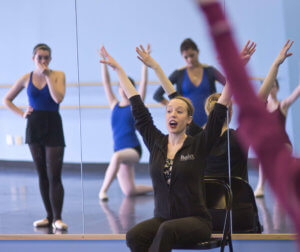 “We present historically significant ballets and works by well-known choreographers, and we produce original, new ballets by our own artistic staff,” Overturff said. “We’re keeping that rich tradition of classical ballet and creating new work.”

Earlier this year, the company opened its American Midwest Ballet School to offer a full complement of dance classes for youth and adults. In January, AMB will move from makeshift spaces to its new home in the Hoff Family Arts and Culture Center in Council Bluffs.

Passion has fueled this rise from plucky start-up to established arts player.

“We started out as a grassroots organization just with a passion for dance and willing to do what it took to get a company off the ground,” Overturff said. “We started with a big dream; and as we continued to work toward that, we’ve really grown as an arts organization.”

AMB has provided dancers and choreography for Opera Omaha productions of Carmen, Cinderella and La Traviata. Overturff choreographed, and company dancers performed a new production of, Peter and the Wolf for an Omaha Symphony concert.

In collaboration with Omaha Performing Arts, AMB builds on its mission of engaging youth by presenting Nutcracker student matinees for 6,000 young people at the Orpheum Theater every year.

The company also collaborates with Joslyn Art Museum on Momentum.

“We usually do a ballet inspired by one of their exhibitions or one of their permanent works of art,” Overturff said. “We bring students in to tour the museum and to see a ballet performance in the same day.”

This year’s Momentum features three diverse works.
For In the Style of Bob Fosse, Broadway legend and Fosse disciple Ann Reinking has created a special medley showcasing the style and movement of the late dance innovator.

Choreographer Frank Chaves, who came to fame with his River North Dance Chicago troupe, is choreographing Habaneras, The Music of Cuba, which Overturff calls “colorful, lively, beautiful.” She said Chaves was in Omaha for three weeks staging the ballet, which keys off Joslyn’s permanent collection works by Latin American artists.

Overturff’s own original piece, Party Animals, is a whimsical ballet and jazz-influenced work that imagines African animals dressed up for a night on the town dancing to ‘60s lounge music.