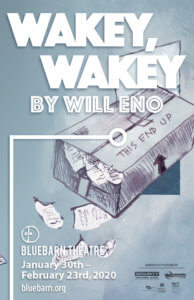 I hope you don’t take this the wrong way. I’m reading Will Eno’s script for Wakey, Wakey now playing at the Bluebarn theater and I’m under the influence of his scatterbrained monologue.

Or maybe I’m under the influence of Aaron Zavitz, who plays Guy, the Everyman who opens the play lying on the stage floor and awakening to ask, “Is it now? I thought I had more time.” But I’m not so much influenced by his intriguing performance as by his Enoesque program note hoping we don’t “think too much while at the same time reflect on the entire breadth of the past you and the future you. No pressure. Absolutely none.”

Now here are the two things I don’t want you take the wrong way: One, that program quote was the funniest moment of the evening, except for the screaming animal video. Two, my wife’s comment that if this was the first play someone saw they’d never want to see another.

Well, thank goodness this wasn’t the first play I’d seen, not even the first Will Eno play. And the Zavitz quote wasn’t the only funny line, and it’s not his fault that there’s nothing much funnier than screaming animals, especially honking donkeys. More important, most Bluebarn playgoers have seen lots of plays that require some tolerance for playful playwrights, so I’ll try to give you an idea of what I’m talking about.

Here’s how the evening unfolded for me. I’d read some reviews that compare Eno’s words to the brilliant dialogue in Edward Albee plays and it took me some time to get over my disappointment that he hadn’t suddenly become the next Albee. By the way, it isn’t entirely a monologue. Echelle Childers, as a home aide named Lisa, appears more than halfway through the 70-minute drama but doesn’t share in the scatterbrained stuff that jumps around in Guy’s head which means I’m now, after using the word twice, obligated to show you what I mean by scatterbrained.

Okay, Guy says, “You’re going to be in this room for over three hours—what do you want to have happen?” And then after saying, “Time is your friend and time is your enemy. We can choose which, for a while,” he admits, “It probably won’t even be one” hour.

So, he adds, speaking from his wheelchair, “Now you’ve suddenly got two free hours to do whatever you want with.” To call the grandkids or “Have sex with the wrong person.”

It just struck me that the script has dozens of better examples of the way Eno has Guy meandering about, such as announcing the arrival of a very special guest who “needs no introduction,” but then not only doesn’t get one but doesn’t even arrive.

I hope you get a pretty good idea of what director Barry Carman and two fine actors are delivering. More perceptive playgoers than this veteran reviewer may get just as much out of it the first time through than I did after reading the script so generously loaned by the director. Do his creative contribution the honor of reading his thoughtful program note.