Home » Theater » Once ranks among All-time best at OCP 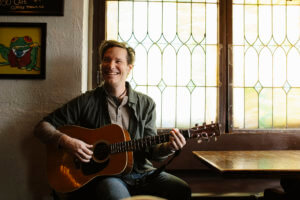 It has been a long, long time since I’ve left a theater wanting to shout, “Run, don’t walk” to see a new musical. But that’s how I left the Omaha Community Playhouse after falling in love with its production of Once.

I’d seen its professional road company which didn’t connect for me in a less intimate venue, and was reluctant to review a show whose award-winning success remained a mystery to me. Then the local treatment by director Kimberly Faith Hickman blew me away, ranking among my all-time favorites at the Playhouse and convincing me that it deserved all the honors that came its way.

Jay Hanson as Guy, an Irish street musician, and Melissa King as Girl, a Czech artist with a young daughter, perform songs topped by the Oscar-winning “Falling Slowly.” It’s one of many songs enchantingly immersed in their deeply-felt but restrained relationship.

Once is like my all-time favorite Les Miserables in one vital respect: The arts of the lyricist and the composer are so blissfully merged that one rushes to applaud not only the two creators, Glen Hansard and Markita Irglova, but Hanson and King as Guy and Girl plus the rest of the cast that plays instruments on stage. 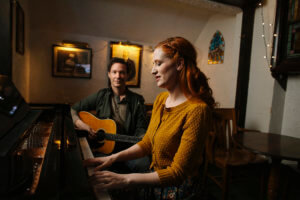 Guy is heartbroken over a breakup and sings, “I don’t know you, but I want you,” a haunting plea as he plans to give up his music and work in his father’s vacuum cleaner shop. Girl happens to have a Hoover that won’t suck. That opens the door for her to encourage him to stick with his music and invites the song, “Broken hearted Hoover Fixer Sucker Guy.”

While their romance is both intimate and understated, the Hoover song, Girl’s Czech momma (Joey Hartshorn) and belligerent Billy the music shop owner (Sean Johnson) all bring bright variety to the Guy-Girl heart of the story. For that matter, so do all members of a strong supporting cast from such veteran actor-musicians as Jim Boggess and Don Keelan-White to younger talents like  Ejanae Hume and Hanna McQuay, both attired so cleverly that it requires a bow to costume designer Amanda Fehlner. 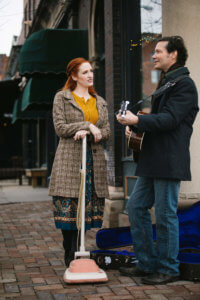 If there’s an award given for successfully intending to sing badly, it would be hard to beat Thomas Gjere’s “Abandoned in Bandon,” which competes with Hartshorn for the best comic cameo.

The preview night audience saw Brinlee Roeder as Girl’s daughter, a role just as appealing as her previous Playhouse turns as Mollie in Annie and Tiny Tim in A Christmas Carol. Anina Frey and Holly Hirsch will share the role with Brinlee.

Though the songs so compellingly done by Hanson and King are the prime reason for the success of the show, a special treat comes in the second act with an a capella quartet, including Boggess, the theater’s music director, singing “Gold”.

I discovered that I’m not the only observer who was won over by a second look at the musical. After sorting out my reactions to the Playhouse version of Once, I found that a New York Times critic was luke-warm about an earlier treatment then all-out enthusiastic over the Broadway cast.

He said its songs “soar with a rough-edged, sweet and sad ambivalence that is seldom visited in contemporary American musicals.” Amen and amen.