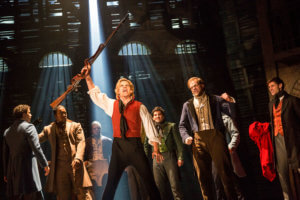 As a child, I was drawn to the image of the wide-eyed waif on the cover of a Broadway music book and hearing the haunting minor melody of “Castle on A Cloud,” for the first time changed my young life. I sang it for a voice recital when I was ten, eventually graduating to “On My Own,” for an audition for a college musical theatre scholarship. Nearly two decades later since I was introduced Les Misérables stands as one of my favorite musicals to date and is one of the most epic and beloved shows, not to mention purely iconic. Perhaps it was my connection to my own French heritage or the romantic idealism of Victor Hugo’s novel depicting the anguish of the less fortunate and the wretched. Either way, Les Miz has made an impact on me from an early age and the thousands of people around the world that have been awed by it.

Les Miz, as it has come to be known, is the 6th longest running Broadway musical with 6,680 performances and was nominated for twelve Tony Awards, being the recipient of eight Tony Awards, including Best Musical. For a time before it went to Broadway main stages, the production played in opera houses across Europe. Fundamentally it is a pop opera, or at least is influenced by the elements of opera, as the show is entirely sung through with no dialogue. Revived again with a new tour in 2017, it has been going strong ever since. Timeless Broadway powerhouse classics such as “Bring Him Home,” “Do You Hear the People Sing,” “One Day More,” and “Empty Chairs, Empty Tables,” among others are some of the gorgeous songs written by Claude-Michel Schonberg with lyrics by Herbert Kretzmer from the original French text by Alain Boublil and Jean Marc-Natel with additional material by James Fenton. 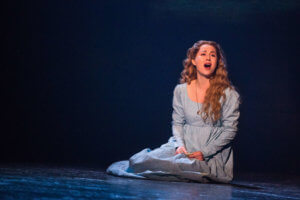 Les Miz is undoubtedly a beautiful tale of redemption, of second chances, and of love. From Jean Valjean’s ultimate transformation to Eponine’s selfless sacrifice, we witness redemptive qualities that make and break the characters. In the revived Cameron Mackintosh production, a timeline follows throughout the show, with various scenes taking place specifically in 1815, 1823, and 1832. It’s set in Digne, Montreuil-Sur-Mer, Montfermeil, and Paris, taking inspiration from Hugo’s 19th century French paintings. The idea to pull from the original illustrations is crafted by Matt Kinley, with costumes by Andreane Neofitou and additional costumes by Christine Rowlands.

At the opening we are introduced to a chained gang of prisoners and Jean Valjean, who is up for parole for his crime of stealing bread, is at the mercy of police inspector Javert. Jean Valjean breaks his parole, a man on the run. Skip to nine years later, a gloomy backdrop depicts the desolate conditions of the streets of Paris. Starving poor huddle together in solidarity trying to shield themselves from the bitter cold of winter (“At The End of the Day”). According to historical accounts, not only was Paris in a deep state of political turmoil and social unrest in 1823, but also had endured an outbreak of deadly cholera.

Les Miz is based on the novel’s historical depiction of the June Rebellion in France. While it’s dark and tragic, the saddest story may be that of Fantine’s. A factory girl worker, she is outed by her fellow employees that she hides a secret illegitimate daughter in another town that she pays an innkeeper to watch over. With an implied affair between her and the foreman, she is thrown out onto the streets to fend for herself. This leads Fantine (Mary Kate Moore), to sell everything and give up her dignity. She places her daughter Cosette in Jean Valjean’s care, now reinvented as a town mayor.

Patrick Dunn shines in the role of Jean Valjean, his rich tenor resonating brilliantly (“Who Am I”). Javert is played by Preston Truman Boyd with a classically resounding vibrato. Javert’s ethos is bound by the law, as he sees it as his God given right to bring Valjean to justice. He vows he won’t rest until he sees him behind bars (“Stars”).

Fast forward yet again to 1832, when Friends of the ABC, a student-led revolutionist association rises up against the French monarchy and revolts after the death of General LaMarque. Despite their efforts to gallantly fight for a noble cause, they are unfortunately doomed from the start (“Red and Black,” and “Do You Hear the People Sing,”). Marius Pontmercy is one of the students in the association who has taken a platonic fondness to Eponine, the streetwise daughter of the crafty innkeeper Thenardiers, but falls for Cosette upon his first sighting of her. The show would not be complete without its canon romance, the love triangle between Eponine, Marius and Cosette (A Heart Full of Love”). And who could forget Eponine’s undying, unrequited love for Marius. Phoenix Best plays the feisty gamine and her rendition of “On My Own,” brought on rounds of applause and cheers. Bests’ energy is dynamic and conveys the pining of the tragic heroine. Jillian Butler plays the quintessential bourgeoisie ingenue Cosette, with a lyrical soprano voice pristine and elegant (“In My Life”). She pairs well with Joshua Grosso with breathtakingly lovely duets. The male chorus of voices in this production are also swoon-worthy. From Enjolras (Matt Shingledecker), to Marius, to each of his comrades, every operatic note is full and beautiful. You may just want to join the crusade from the audience, and ignite a revolution.

I admittedly cried at the ending of this beautiful, evocative show in a moment of catharsis. Its themes of love, courage, and compassion resonate throughout and come full circle. After a life of condemnation Jean Valjean learns to love, to help others and to show mercy to his enemies. It’s a beautiful portrayal of what society could reflect if those virtues guided us every day. Les Miz gives us hope that they can.

To love another person is to see the face of God.