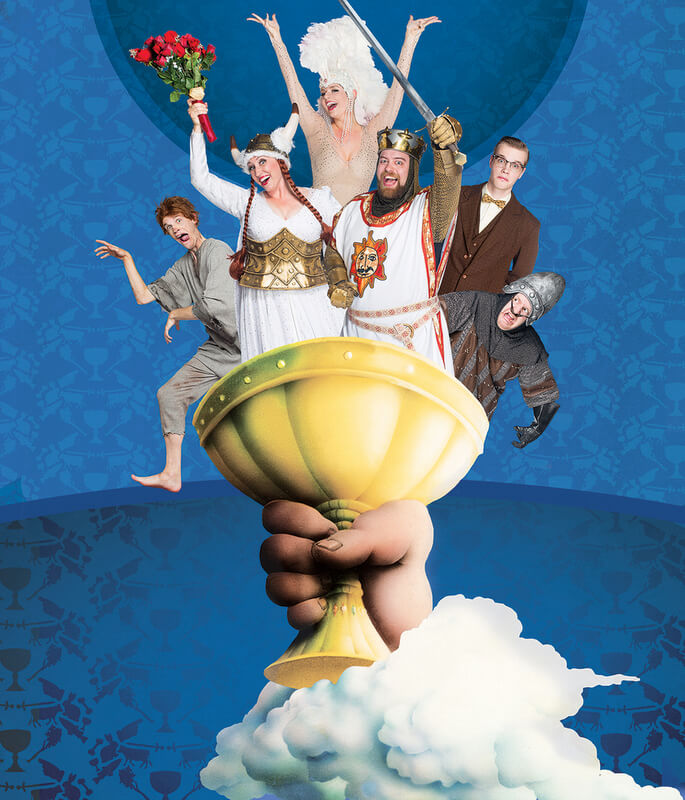 When talking to Mathias Jeske, a cast member of Omaha’s Playhouse’s production of Monty Python’s Spamalot, he is quick to note that the stage musical is not just an adaption of one famous comedic film, but something a bit more.

“A play lovingly ripped off from the film Monty Python and the Holy Grail,” he said. “However, Monty Python fans need not be disappointed and think that this is just limited to Holy Grail material. While the plot generally follows Holy Grail, the musical itself is kind of the greatest hits of Monty Python. There’s material from the show Monty Python’s Flying Circus, a whole number from Life of Brian, and a little bit of The Meaning of Life. There’s Python enough for everyone in this show.”

The Tony Award winner for Best Musical, now celebrating its 10th anniversary, showcases King Arthur and his companions on their search for the Holy Grail, interrupted by iconic Monty Python characters along the way. The musical element of the show is something relatively foreign to the Monty Python style of comedy. In the comedy troupe’s hayday, normally Eric Idle’s sketches were the only ones that featured musical numbers. Now, cast members are learning to bridge the worlds of absurdist comedy with Broadway musical.

“The way Monty Python humor tends to work, especially on stage, is that it’s all about the strange characters that are encountered over the course of the story,” Jeske said. “It’s less like a hero’s journey, even though it’s presented that way, as it is a series of sketches. Each scene is very short, here’s a bunch of jokes, here’s some crazy characters that you might recognize, and then we go and do another [scene]. It’s sketch after sketch that’s loosely threaded together with a hint of continuity.”

Whether you’re a seasoned Monty Python fan, a musical theatre junkie, or just a fan of Omaha Playhouse shows, Jeske said Spamalot has a little something for everyone.

“There’s no reason for anybody to be confused or disappointed by this show,” he said. “Even if you don’t know the material, even if you’re not a Broadway or musical fan, it’s just funny stuff. You will find this to be a funny and amusingly spent two hours. Everybody has something to take away from it.”

The experience of working at the Playhouse has been especially rewarding for Jeske, who’s making his debut at the community theatre.

“To have this be my introductory experience at the Playhouse, when it’s something I know and appreciate so well, I couldn’t ask for something cooler than that.”

The Omaha Community Playhouse’s production of Monty Python’s Spamalot will run through June 28th on the Hawks Mainstage. For more information on the production, visit www.OmahaPlayhouse.com.