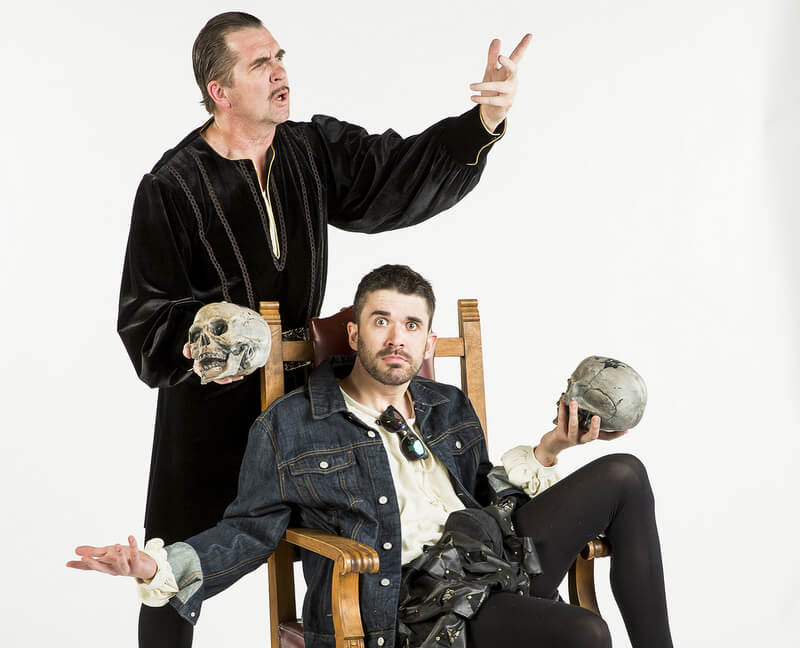 I Hate Hamlet by Paul Rudnick runs through May 10th on the Hawks Mainstage of the Omaha Community Playhouse. It tells the story of Andrew, a young television actor who’s been given the role of a lifetime, playing Hamlet in the park in New York City. The only problem is that he hates Hamlet. When he moves into his new place in New York, he soon finds out that it once belonged to acting legend John Barrymore. When Barrymore’s ghost starts walking around the residence, Andrew’s life and career are turned upside down as he clashes with the acting apparition. The show’s director, Ablan Roblin, said the play’s balance of tone is what makes it quite peculiar.

“It’s interesting because this play, in my opinion, lives in a lot of different areas,” he said. “There are some areas that are high comedy and then there are some areas in the script where it’s pretty poignant. It’s got some really nice moments.”

The key to show, Roblin said, lies in the offsetting dynamics between slapstick humor and high art. To find that sweet spot, Roblin had to rely on the words given to him by playwright Paul Rudnick.

“The way he puts all those things together in the script is kind of genius because it’s a mash of a lot of different styles,” Roblin said. “It’s been fun doing that. It’s been a challenge in some aspects because you have to find out where some of these characters live. Some of these characters live in a different place than the others. Finding the cohesion in that has been really interesting.”

Regardless of whether the show he’s directing is a drama or comedy, Roblin tackles each project he works on with the same mindset. It’s one of digging deep into a script, deep into the human condition, and finding the simple truths among the situations.

“You look at a piece of work and get a general idea of what you feel this is about,” he said. “Then you get into it and you realize there are a lot of sub-layers; a lot of little areas you are peeling back. Not that it gets heavy, but you are finding the truth. Once you find the truth in what you are doing some amazing comedy ensues. Especially if it’s written well, which this one is.”

The key for audiences, Roblin said, is observing how we consume art in its many forms. Are we the ‘sitting at home binge watching Netflix’ type? Do we dress in our finest attire for the symphony type? Are we somewhere in between? How serious do we take our art?

“[The character] Gary, who plays the agent, has a really honest take on how people view [high art]. His question halfway through the show is, ‘I’m just wondering which arm rest is mine?’ I think there’s a universal truth to that. I think everyone has experienced that, even actors. That’s what makes this so interesting because it gives you a glimpse into why people make the choices they make as an artist. Why people consume the type of art they consume. Then, you are able to sit back and laugh at it, and enjoy it in a lot of ways that you probably couldn’t.”

The Omaha Community Playhouse’s production of I Hate Hamlet by Paul Rudnick runs through May 10 on the Hawks Mainstage Theatre. For more information on the production, visit www.OmahaPlayhouse.com.