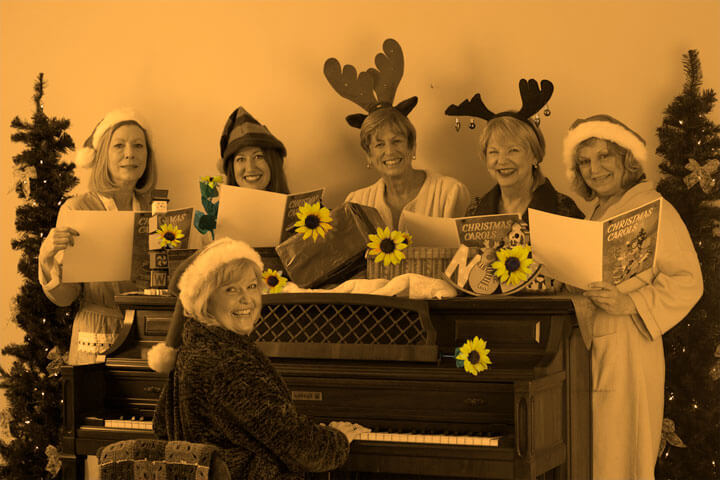 From talking with cast member Erika Hall Sieff, Calendar Girls, the latest show from SNAP Productions, is anything but your typical risque fanfare.

“The show is about a group of women that are part of a women’s institute, which is a social group. One of the women loses her husband to leukemia so they decide to raise money for a new settee in the hospital. To raise money for it, all of these older gals decide to do a nude calendar.”

Written by Tim Firth, Calendar Girls was adapted from the 2003 film of the same name starring Helen Mirren. The female characters in the show range from their 40s to 70s, each one finding their own strength and independence in baring it all while supporting one another. Sieff said the ensemble worked hard balancing their challenging dialect work alongside the creation of such unique character voices. Though don’t expect to see too much skin thanks to some well placed set pieces.

“We’re really careful about how we do the nudity on stage. All of us are topless for a few minutes but the audience will never see it. We’re very strategically placed behind all sorts of props, mostly food items, tables, things like that. Unless something goes wrong, because it is live theatre, we’re really careful about not showing anything that would just take the audience right out of it.”

The show is based of the true story of a Women’s Institute that ended up raising enough money from their nude calendar to fund a whole new wing of their local hospital. After seeing audience reactions from the first few weeks, Sieff thinks anyone and everyone will be inspired by a show that’s about loving and embracing our flaws.

“We had a group of red hat ladies come the first night and we could hear them saying, ‘We should do our own calendar!’ It’s a liberating experience for women. It’s about being brave, knowing that you’re not perfect and you are of an advanced age. Maybe you’re not a group of women that people would go and buy a magazine with your nude photos off of the rack. It’s about doing it anyway and about being strong enough to say, ‘This is who I am. You’re going to get all of me whether I’m perfect or not.’ Nobodies perfect. It’s something that everybody can relate to.”

Calendar Girls by Tim Firth, the latest show from SNAP Productions, will finish its run this week, closing on June 21st. For more information on the show, visit www.SnapProductions.com.