For the 11th year, it began again with “Sergeant Pepper’s Lonely Heart Club” and wound up with the crowd on its feet, dancing and clapping and singing along with “Come together…right now! Over me!”

Half of us had been there before and half were virgins, but Billy McGuigan’s Yesterday and Today—An Interactive Beatles Experience was still as much brand spanking new fun as ever, making the old young again and pre-schoolers hip participants. 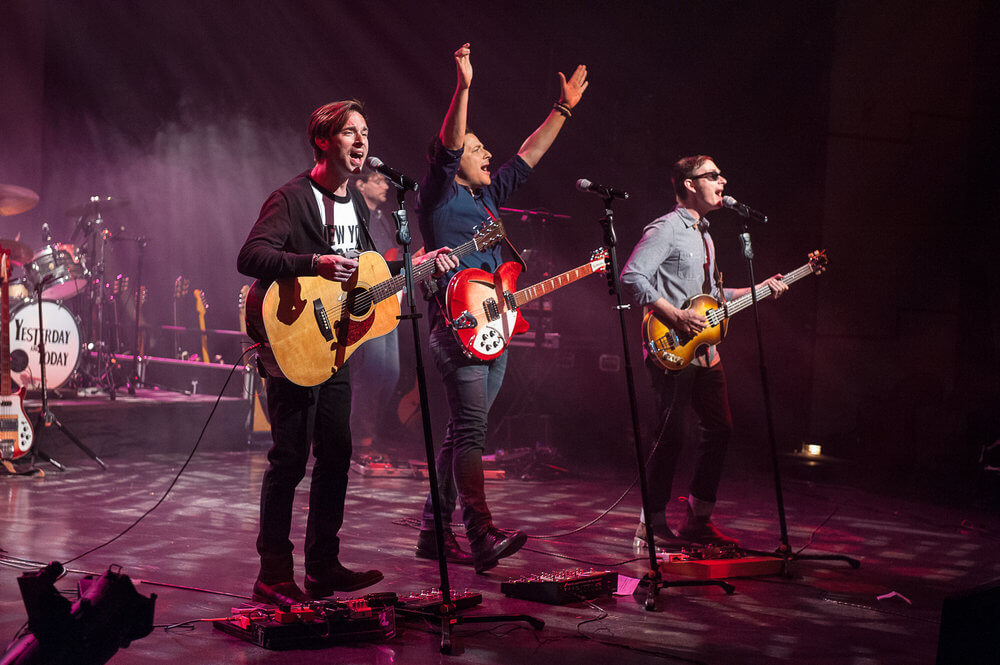 After that opening number, it wasn’t long before they took their first request, a note from “Karoline with a K,” asking for “Birthday” for her Aunt Debbie who flew in from New York for her 65th.  So Billy and brothers Ryan and Matthew sang, “Party, party, we’re gonna have a good time.”

Soon a guy named Bob wanted “Ticket to Ride” because it played a part in his finding  a long lost sister, and later Richard, attending for the first time, requested “I want to be your man” because his sweetheart agreed “to me being her best man forever.”

And her sister, sitting with Richard and other family members, wrote “I was sure Richard would come up with something sappy for my sister.” Because Richard took that and other friendly abuse from his companions, he won the prize for best request of the first act.

All that banter adds to the fun, but it’s all just a way to connect the memorable music to the lives of the audience.  A boy named Nicholas asked for “Here Comes the Sun” just because “it makes me happy.”

And a woman who has returned to the Beatles show every year at the Omaha Community Playhouse wanted to hear Matthew sing “Blackbird” once more but admitted, “I usually try to say something funny but after 11 years it gets too tiring.”  That song, a sweet contrast to some of the hard-rocking favorites, won even more requests than “Yesterday,” the most covered of all the Beatles hits.

But Billy himself took that standard again, brother Ryan brought the crowd to its feet with “Come Together” and the rest of the band—from guitar-master Jay Hanson to drummer Rich Miller—shared the spotlight.

Tara Vaughan slapped her keyboard silly most of the evening, and when she joined on vocals stirred interest in her new show, “She Rocks—the Women of Rock,” set for next June at the Playhouse.

She also went into the audience to have Clara, 8, read someone’s request for “In My Life.” Clara’s careful enunciation of the sentimental note turned out to be such a nice touch of serendipity that Tara deserves some sort of prize for picking participants.

As for the woman who grew tired of coming up with new ideas for her song choices, I recommend my approach to requesting “When I’m 64.” For years now, I just repeat the same pitch: “Many years ago when I turned 64, I began suffering from adult onset Beatlemania.”