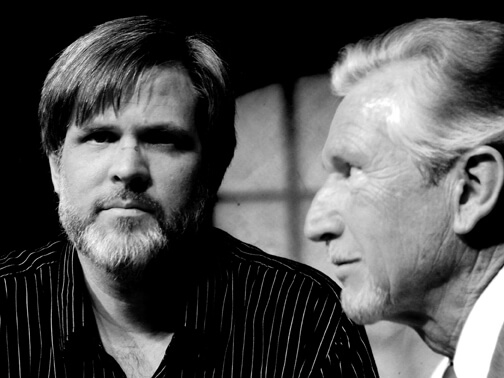 Maybe the fact that the Home and Garden Network so often airs in our house explains why I was even more taken than usual with a Jim Othuse set design for On Golden Pond at the Omaha Community Playhouse.

The large stone fireplace, the fisherman’s hats hanging on the wall, the porch—all you’d want in a lakeside summer home with the loons calling—made January go away for a few hours with Norman and Ethel. It was a short walk (down through the orchestra pit) to the unseen dock, which lacked only the creaking it makes when swayed by lapping waves.

If you grew up around here, you probably knew someone who had such a summer home in Minnesota or Iowa’s Lake Okoboji, or maybe you rented one. It’s serenity except for Ethel’s battle with the flies and mosquitoes and Norman’s morbidity.

By the way, consider how fortunate the mild January weather has been for guest director Judith K. Hart. She commutes almost daily from Lincoln during rehearsals, and this marked as mild a month as she’s encountered directing winter shows for the Playhouse.

One year it got so bad she had to hole up in Omaha for a week.

Good news came from the Brigit Saint Brigit Theatre, announcing its new home for the rest of the season. They’ll open The Seafarer Feb. 17 on the northwest corner of 10th and Dodge Streets.

The ground floor space in the 1000 Dodge Condominium Building will seat 70. It follows a recent use of Joslyn Castle and a few years at the Downtown Space shared with the Blue Barn.

Brigit devotees have traveled with them from the Joslyn Museum on 24th and Dodge all the way to Bellevue University (by far the least comfortable and most distant) and then the little theater on the College of St. Mary campus.

That was easily the best venue for comfortable seating and handy parking. The latter may be a challenge at the new downtown spot on nights when Maverick hockey or other Century Link events draw big crowds.