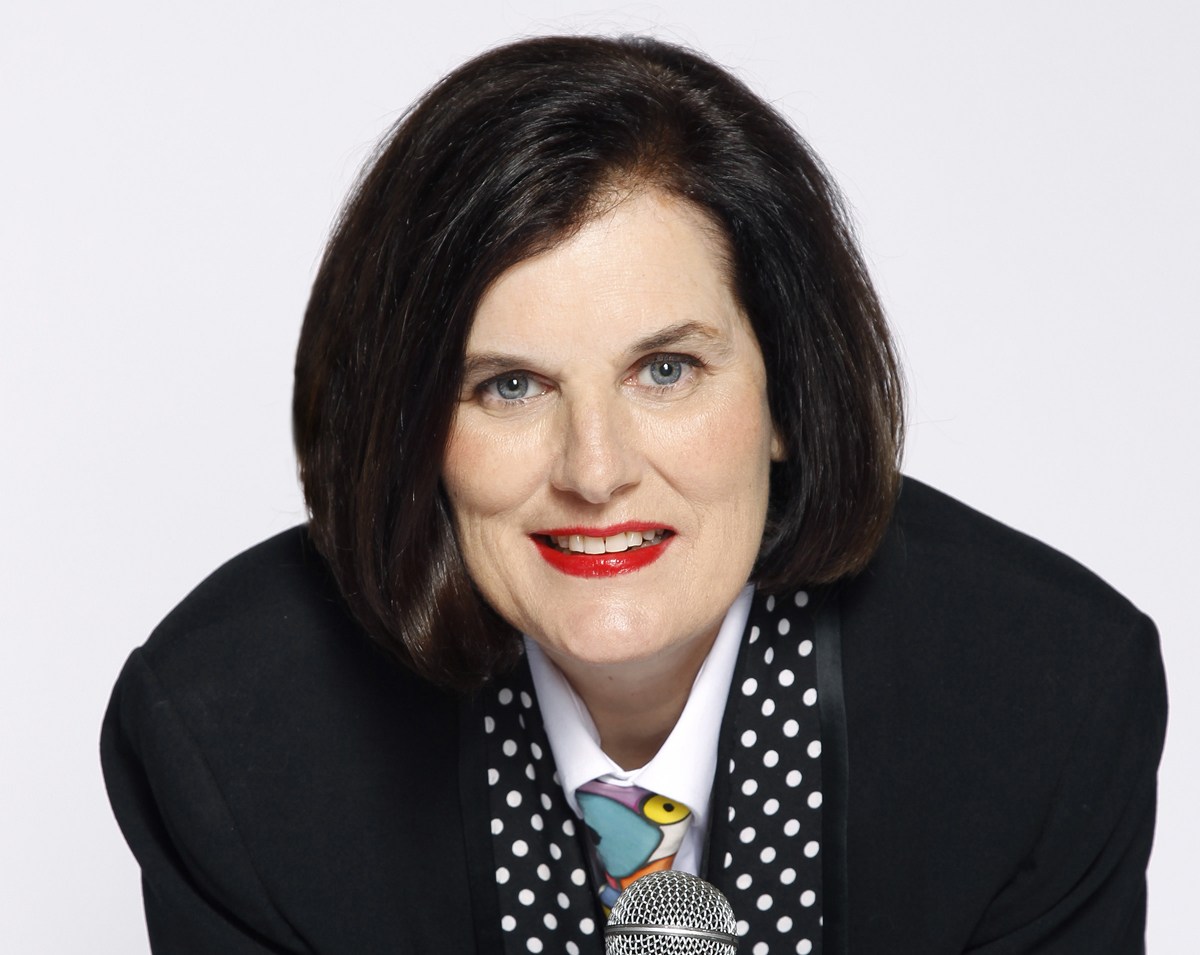 She owns history with two native Nebraska television comedy icons. She guested on the Tonight Show with Johnny Carson. At the 2012 Great American Comedy Festival in Norfolk honoring his legacy, she was joined by fellow satirist Dick Cavett, whose own talk show she’d done. Last fall she did a Lincoln gig with the venerable host, author and New York Times columnist.

“I love Dick Cavett,” she said\ “In 2014 we did this series in Los Angeles where writers interview writers in front of an audience, and I interviewed Dick for that. Somehow from that came this thing of he and I working together in Nebraska. It was so much fun.”

“Oh my God, that was a dream night,” Cavett said of their latest collaboration. “We have a rapport somehow on stage together. We just like each other. We don’t interrupt. There’s no trace of competition. That’s rare with two performers both out there pulling for laughs. It’s a little theatrical miracle. We both get each other’s rhythm and it starts climbing and it just gets into a freewheeling situation you don’t want to end. It plays so well you’d almost think it’s a well-directed play.”

“He’s a wordsmith,” Poundstone said of Cavett, “so mostly I try to make sure he has some space to do his thing. You know he’s got so many great stories. I don’t know if he did this by design or if it’s just the way life worked out, but he became friends with legends – Stan Laurel, Groucho Marx …”

Cavett confirmed it was by design he befriended these towering comic figures, but he added he counts himself fortunate to know Poundstone, too.

“Paula is a genuine wit. So smart and so funny. Seeing Paula work an audience is one of the great experiences in performing arts. She’s an acknowledged genius at it.”

He recalls she was one of his few guests who ever hand-wrote him a thank-you note. Chalk it up to her New Englander-by-way-of-Southern-good-mannered-parents-bringing-up. Meanwhile, she defers any IQ edge to her erudite colleague.

“Dick has me there. He’s corrected my grammar before in emails. So he wins.”

It still blows her mind he was targeted by President Richard Nixon. As a pundit, Cavett criticized Nixon and tackled the still unfolding Watergate scandal on national TV when no one else in mainstream media would touch it (see Dick Cavett’s Watergate on YouTube).

“I’ll tell you what Dick has that I’m so jealous of, which is audio tape of Nixon saying, ‘Is there any way we can screw him?” What I wouldn’t give for (Donald) Trump to go down and for them to later find him cursing me along the way that he will somehow get me.”

A Trump-aimed barb she tweeted in the 2016 campaign did trigger a response, only not from the man Cavett’s called “the missing Fifth Marx Brother – Trumpo,” but from what she suspects were his minions.

“For the next maybe 48 hours my Tweeter feed was busting with vicious, cruel, horrible comments about me,” she said, “and then it went away. I’m fairly certain it was, A, Putin, B, bots, and, C, an army of people Trump has ready to do that. But why me, I don’t know, because I’ve tweeted many things since then not flattering to him and it never happened again.

“But an automated tweet is not nearly as good as Nixon saying how can we screw him.”

Even though Trump provides steady fodder, she said, “I would be happy to never come up with another joke again in exchange for justice being served in terms of Donald Trump. I’ll gladly make stuff up. I don’t need our lives to suck in order to think of jokes.”

She’s never thought her work as frivolous but “as the years go by,” she said, “I personally value my job more and more and more.”

“I consider myself a proud member of the endorphin production industry given the evidence of how important it is not just laughing but laughing with other people.”

“When people type LOL, generally speaking, it’s a lie. Looking at something on a screen when you’re by yourself you don’t laugh. You might acknowledge you think it’s funny, but you don’t laugh. The experience of laughing, even if you go by yourself to a theater or a movie or whatever, you have some connection to the rest of the audience. It’s important being in the room with other people.

“I don’t suggest people have to come see me, although wouldn’t that be nice, but it’s really important to go out and be with other people for a night of laughter. To me, the fact I get to do that and I get paid for it feels better and better every day that I live.” 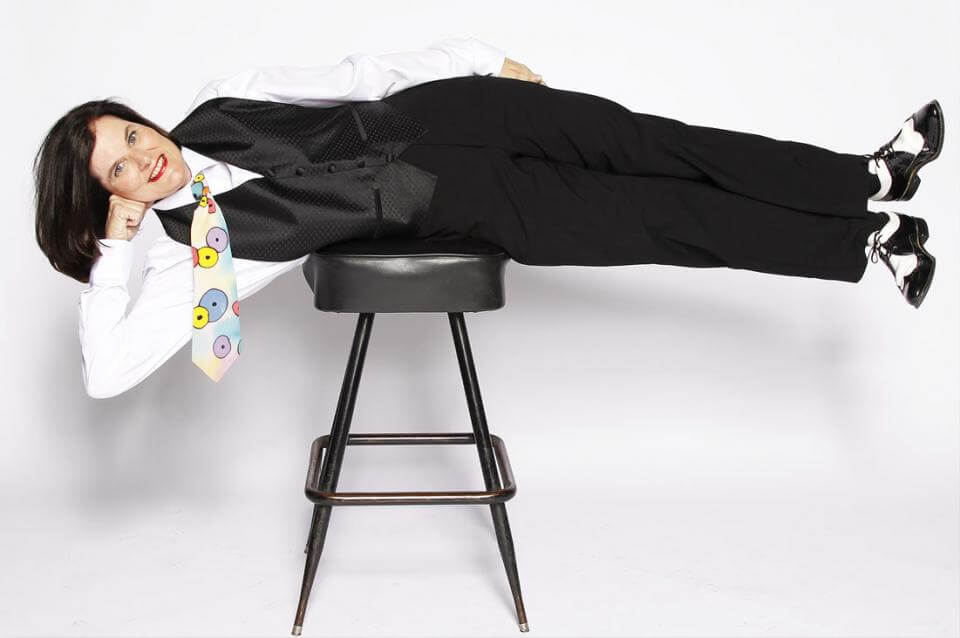 Decades into her career, she feels freer being herself than ever before.

“There is something to be said for experience. The other thing is and I think this goes along with just life in general, I’m becoming more comfortable with who I am. What I endeavor to do on stage is actually to be the most me I can be, whereas when I was younger I don’t know if I was entirely comfortable with who I was in the way one becomes as time goes by.

“I went to my 40th high school reunion last fall and it was so damn much fun. I went to a couple of them before but none were as good as the 40th because you’re just old enough you don’t really feel the need to impress people, nor are you impressed by others who do feel that need. It just felt like everyone had taken a deep breath and exhaled.”

Her new book The Totally Unscientific Study Of The Search For Human Happiness (Algonquin Books) “is a series of experiments doing things that either I or other people thought would make me happy,” she said.

“Every chapter is written as an experiment with the conditions, the hypothesis, the qualitative and quantitative observations, the variable, et cetera. The real question for me wasn’t what I would enjoy because I know what I enjoy, but what can I do that will leave me with a bounce so that when I return to my regular life I have some reserve. My regular life being raising a handful of kids and animals and being a standup comic and being stuck being me 24 hours a day.

“In the analysis part of each chapter I check in with my regular life to see how things are going. it’s the story of raising my kids and by the end of the book they’re all out of the house.”

It took her seven years to write.

“It’s number one job is to be funny and I think it achieves that, But mercifully any number of reviewers noted it was more than that and that’s certainly satisfying..The audio version was one of five nominees for audio book of the year at the Audis last year, although it didn’t win. But it was up against A Hand Maid’s Tale, so I didn’t feel that bad about not winning. It’s pretty good company. You could do a lot worse.

“Now it’s a semifinalist in the James Thurber Prize for American Humor (competition).”

Fame is a relative thing and Poundstone’s content where she falls on the spectrum.

“I’m not a household name except in my house – where I insist on it. Nobody has to close a store for me to go shopping.”

“Crazy-making” is what she calls the social media expectations placed on creatives these days. “Now when your agent sells you to a promoter or a theater they want to know how many followers you have and what social media you do. All of that’s considered part of the package, which is too bad.”

“I’ve started doing this thing where I sometimes don’t have any devices on so I can just think. It’s a scary leap.

I can’t say I always like it. But I do find myself being a little bit more productive.”

“In the beginning I thought I shouldn’t be doing that. But fairly early on I realized the heart of the show was in these unique things that weren’t going to happen in the other show – it’s just unique to that night and to that audience. Sometimes I kind of put my line out there. I’ll start talking to somebody and then I leave it and come back to it later. You just sort of weigh in little pieces of information that eventually connect and fill the show.

“It took awhile to recognize it is a very valuable thing to be doing and to get pretty good at.”

Her Omaha show starts at 8 p.m. For tickets, visit, ticketomaha.com.