We sent mother-daughter thespian duo to check out OCP’s James and the Giant Peach and report back to us about all of the Dahl-esque onstage magic. When we talk about youth performances and reviews it is important we include their opinions on the work too, as they are the target demographic. Omaha is so full of spectacular youth performers, I can’t wait to see and hear more from all of them. Check out Stella this month also! She’s starring in The Rose’s, “Wonderland: Alice’s Rock N Roll Adventure.” 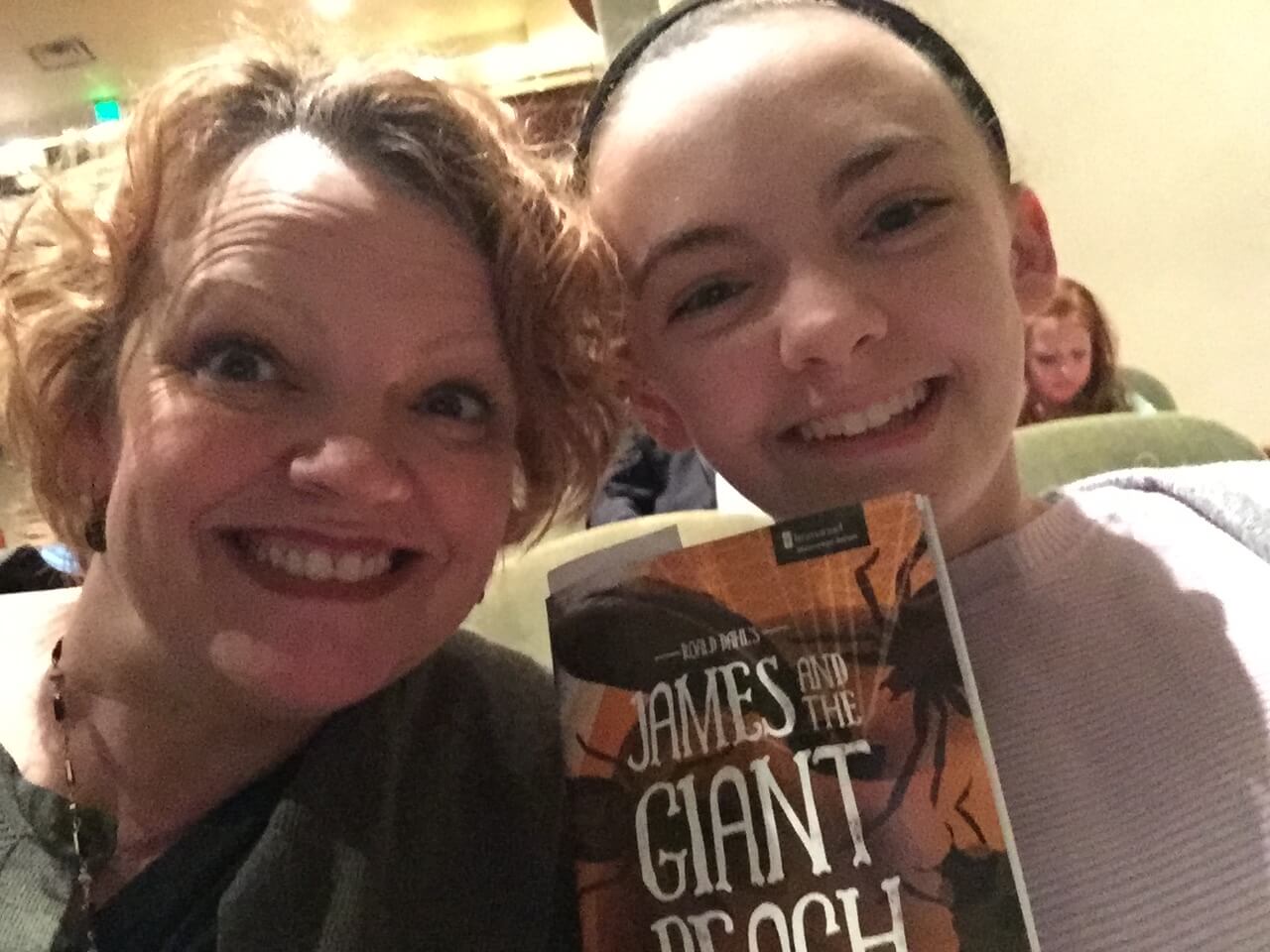 Synopsis: James and the Giant Peach, based on the novel by Roald Dahl, is a story about an orphan boy who ends up living with his only living relatives, two greedy aunts.  James is forced to live in the basement where he befriends a group of creepy, crawly insects. James discovers a magic potion that results in a giant peach and human sized insects.  The giant peach falls from the tree and sends James with his insect friends out into the Ocean on an adventure. James and his friends learn to work together as a family during their dangerous voyage.  The play is about self-discovery, acceptance and love.

What did you know about the show going in:

Stella:  The play is about a boy that has a really bad life and someone comes along and gives him a magical potion.  The bugs eat it and it makes them larger. It also makes a peach really big. The bugs and James travel to New York on the giant peach. I now the director and many of the actors in the show.

Kim: I had never read James and the Giant Peach, so I was looking forward to learning the story. I had seen advertisements for the show and was very impressed with the marketing.  The pictures on social media were very enticing to the eye. I had read the preview article about the show and OCP’s attempts to build a younger audience by providing more family faire to their seasons.

What are you most looking forward to?

Stella:  Looking forward to seeing Maddie as James and how they portray the giant peach.

Kim: I am looking forward to the performances of some great area talent and hearing a new story.  I am also intrigued by the visual elements.

Thoughts on set and costumes.

Stella:  Costumes were cool, but it did seem like it was a struggle at times for the insects. The set was creative, but I was expecting more from the peach itself.

Kim: If I were to take a snapshot photo, it truly is visually whimsical.  I loved the puppetry. The actors were very expressive with these puppets.  However, as soon as the insects became human sized creatures, I found myself empathizing for the actors.  They instantly were restricted. While the costumes were super cool to look at, they didn’t seem practical for movement in the space.  As soon as the ensemble were tethered to the area of the giant peach, there was not much area for them to move in. The giant peach was a bit reflective of the sun from The Lion King.  While it was larger, it didn’t meet the expectation of being “giant”. All of the extra puppet work of the seagulls and sharks were so much fun.

Who do you relate to?

Stella:   If I had to pick a character, I would say James because he has a sense of adventure and he is open to new things.

Kim: I relate most to the Lady Bug.  Being a mother, I am sure I attach myself to this character because she is the one who nurtures the others.

Stella:  The audience cheered loudly after each music number, but it took a while for everyone to stand up at the end.  There were some seats that were open, so it was not full.

Kim: I was very happy to see so many children in the audience.  I imagine offering $7 tickets to students on opening weekend was a great draw for families.  The house was not full, but very enthusiastic. 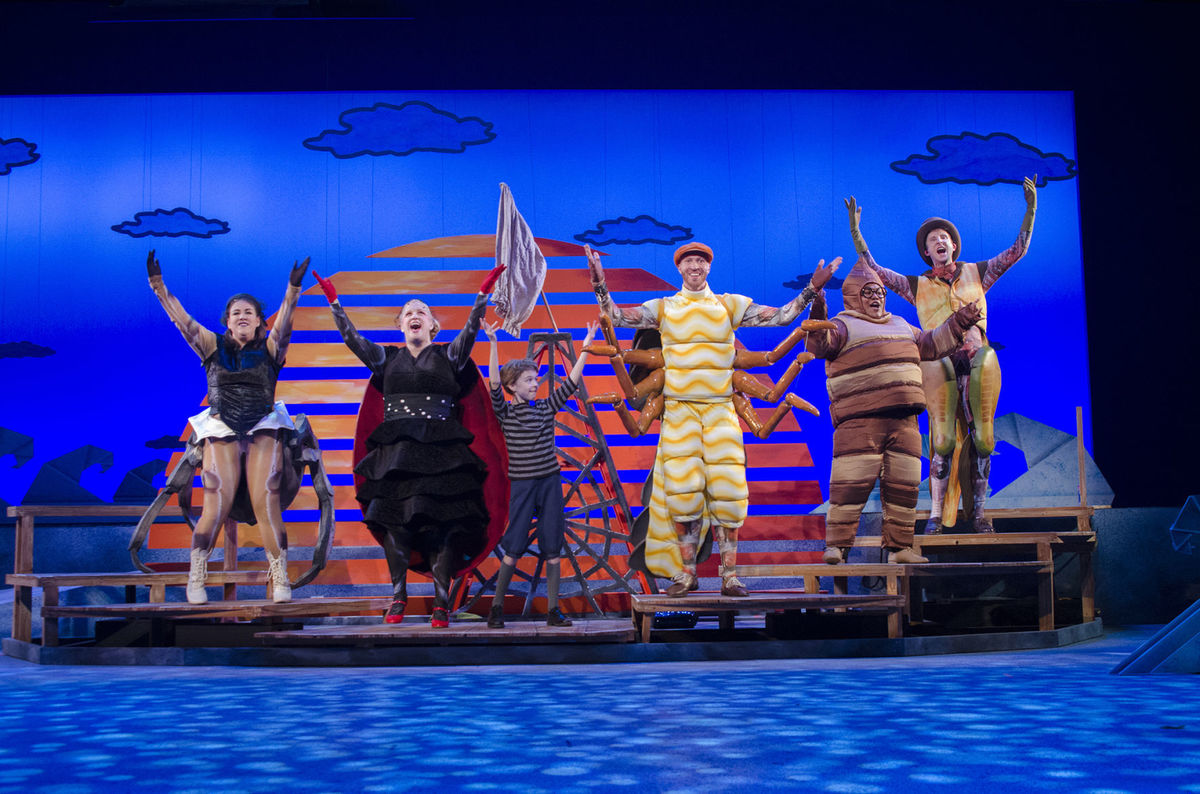 Highlight of the Night:

Stella:  Maddie’s song, “Middle of a Moment”.  She was never out of character and her singing voice was awesome!

Kim:  The highlight for me was to see little Maddie Smith portraying James with such honesty.  She played a strong and endearing character that any aspiring young actor would be envious to be in her shoes.  I loved seeing so many kids involved in the cast. It is true, that our theatre community does need to build a strong youth base not only for our audience, but on the stage as well.  I also enjoyed the gender bending within the ensemble number that all the females dressed as traditional men and the men dressed as women.

Lowlight of the Night:

Stella:  The dialects: some of them were not easy to understand and it was not consistent.

Kim: The meat of the play takes place on the giant peach in the middle of the ocean.  That being said, the action happening among the primary characters really felt restricted by their costumes and the set.

Who should See this:

Stella:  A wide variety. It is definitely a family show.

Kim: This is a story for everyone for sure.  Having a strong young character in the main role will definitely appeal to a young crowd, but there a many take-aways for the adult audience too.

Words to describe the Show:

Final Thoughts: I appreciate the OCP branching out and offering more shows for young audiences in their season. For a family of 4 on an average weekend, without the opening week or twilight discounts, it is quite an investment for entertainment. I am sure that the Omaha Community Playhouse must be seeking ways to provide this type of enriching family entertainment at a more affordable price.

James and the Giant Peach