There didn’t seem to be many millennials in the opening night audience for Who’s Afraid of Virginia Woolf  in the Crossroads Mall, so a savvy crowd knew what to expect when George and Martha began their abusive games at 2 a.m. after a well-lubricated faculty party.

More important, as theater and film-goers learned 50 years ago, their young guests, Nick and Honey, didn’t have a clue.  Or they’d have run for their lives.

But they don’t escape and Edward Albee holds them captive for his Tony-award winning play which became an Oscar-winning movie with Liz Taylor and Richard Burton as the couple bearing the first names of our first president and his wife.  And given none of their dignity.

We’re captive as well because their brutal games are richly human in their horrors and because director Gordon Cantiello has given us the opportunity to witness one of Omaha’s finest talents, Delaney Driscoll, play Martha for the first time.

Before counting the ways we loved her, it helps to explain why the young professor and his fragile bride stick around. The guests stay because Nick the biology prof is ambitious and because Martha is his college president’s daughter and it doesn’t hurt that she’s a sexy old broad who has been imbibing heavily and appears to be “plowable.”

Warning: the play contains so much rapid-fire tippling that you can abstain all evening and still feel like you’re going home with a hangover. 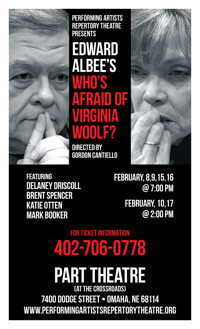 So the games begin, starting with “Humiliate the Host,” where Martha eviscerates George as “a bog,” a flop of a history professor without the right stuff to use his wife’s leverage with the boss.

George fights back using Martha’s fear that he’ll bring up “the little bugger,” their boy who we’re told is now turning 21.

The games go on with “Hump the Hostess,” and finally “Get the Guest,” where Martha calls Nick “house boy” after his drunken failure at the previous game.  Worse, George sends Honey, who can’t hold her liquor, fleeing the room by cruelly teasing about her false pregnancy.

Make no mistake,  Cantiello has the cast to conquer one of the talkiest plays in stage history.  As a masterpiece of dysfunction it is topped only by Tracy Letts with “August: Osage County.”  Katie Otten is a believably vulnerable Honey and Mark Booker manages to make Nick bearably hunky before booze weakens his spine.

As for George and Martha, both Brent Spencer and Delaney Driscoll have the acting chops to carry their three-hour duel to a successful draw. Both survive the verbal gun-slinging with high energy, yet visibly show the price their characters pay until Martha finally admits, “Who’s afraid of Virginia Woolf? I am.”

But it’s hard to accept the idea that Spencer’s George is, as he often reminds, six years younger than Martha. Worse, I’m guilty of wishing he was Richard Burton. That’s not the fault of director Cantiello or Spencer himself, but it resulted in him seeming too whiny in pleading with Martha to stop twisting the knife.

Still, he kept fighting back boldly and provided enough power to give added weight to Driscoll’s brilliant performance.  Her many substantial roles with Brigit Saint Brigit and other local theaters, paired with film work for Alexander Payne, paved the way for a triumph that should be seen by all who’ve enjoyed her talents over the years.

The Performing Arts Repertory Theatre (PART) production is staged with the audience on three sides of George and Martha’s living room. The most effective aspect of its design was the background music, the most flawed was the much-too-visible presence of a crew member’s face behind the fireplace.

What’s most surprising about this 1962 creation is that it never seems dated.

Who’s Afraid of Virginia Woolf? runs through Feb. 17, presented by the Performing Arts Repertory Theatre in the Crossroads Mall, 7400 Dodge St., with shows at 7 p.m. Friday and Saturday, 2 p.m. Sunday. Tickets are $35, $30 for seniors and $25 for students. Visit performingartistsrepertorytheatre.org or call 402.706.0778.