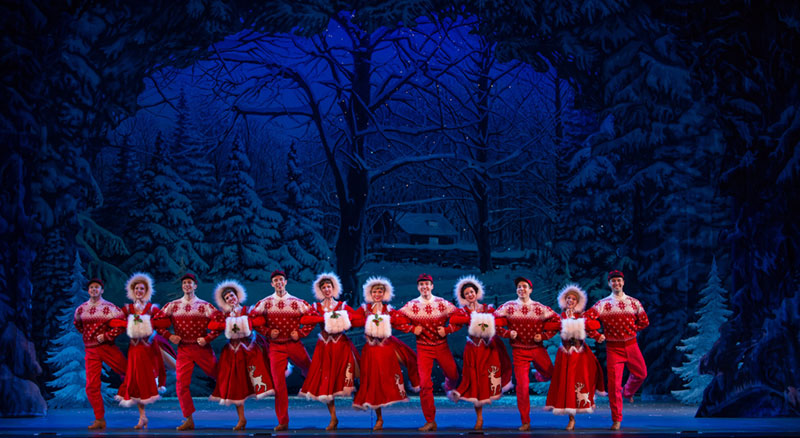 Start with the songs from the greatest tunesmith in American history. He gave us not just the nostalgic title song and the others in this holiday musical now playing the Orpheum, but “God Bless America,” “Easter Parade” and hundreds more.

And revisiting Irving is not even the best thing about this old favorite. I rarely leave a show raving about the big dance numbers, but this one kept dazzling me all night long.

It’s not easy to list everything that makes it special so I’ll begin with a caveat. Don’t pass it up simply because you’re too fond of the movie and don’t think the stage version can possibly survive comparisons.

You might miss the mellow, pear-shaped notes crooned by Bing Crosby, but the cast more than compensates for such differences. Take Lorna Luft for example as General Waverly’s bossy aide at the Vermont inn.

Sure, she’s Judy Garland’s daughter, but the celebrity connection isn’t what makes her such a great plus. She comes close to being a show-stopper with her treatment of “Let Me Sing and I’m Happy,” a rouser about her longing to return to the stage.

And the other “name” in the cast, Conrad John Schuck, as the General known endearingly as “the Old Man,” has all the gravitas that military role requires. (Schuck has played Daddie Warbucks on Broadway, Rock Hudson’s law enforcement sidekick in TV’s “McMillan and Wife,” and Painless the well-endowed dentist in the movie “M.A.S.H.”

As for the less familiar members of this touring company, it’s hard to top Jeremy Benton as Phil Davis, the happy-go-lucky half of the Army buddies turned showbiz song-and-dance team (think the Danny Kaye role). Touring company credits aren’t always impressive, but his include an Astaire Award nomination and starring in 42nd Street opposite Shirley Jones.

The more serious Bob Wallace (Sean Montgomery) and Davis also team up in romancing a sister act, Betty and Judy Haines. They’re the gals who sing, “Lord help the mister who comes between me and my sister, and lord help the sister who comes between me and my man.”  Betty (Kerry Conte) is the beautiful vocalist and Judy (Kelly Sheehan) is the shapely blond dancer who taps up a storm with Davis.

Among night-long highlights: their hoofing on “The Best Things Happen When You’re Dancing,” and perhaps the song-and-dance peak of the show, “I Love a Piano.” Benton’s dancing was the best I’ve seen in a Broadway show since an Astaire winner hit Omaha in a State Fair tour years ago.

The show’s success doesn’t depend on a host of highlights, but the whole production package, especially the combination of orchestration, costumes and scenery that displays a solid cast in the best light.

Yes, it’s often great to welcome something original, unique and groundbreaking. But it was timely after the intentionally sleazy Cabaret to see something traditional and it didn’t hurt after the most divisive election in modern memory.

If the younger generation doesn’t know the White Christmas story, it takes what became the all-time best-selling song from the 1940s movie Holiday Inn and put it in a World War II setting, then moved to 1954 when Gen. Waverly’s inn was struggling, sans snow, to survive. Wallace and Davis decide to save it by putting on a show and using the Ed Sullivan telecast to reach out to their old Army division.

Along the plot path, you get such songs as “Count Your Blessings Instead of Sheep,” “Blue Skies,” “How Deep Is the Ocean” and “I’ve Got My Love to Keep Me Warm.” That includes several not in the movie.

As always, an audience favorite pops up among minor characters, and this time it’s portly, bearded Frank Ridley as Ezekiel Foster, the inn’s handyman, who always responds affirmatively in that Down East utterance, “Ay-uh.”