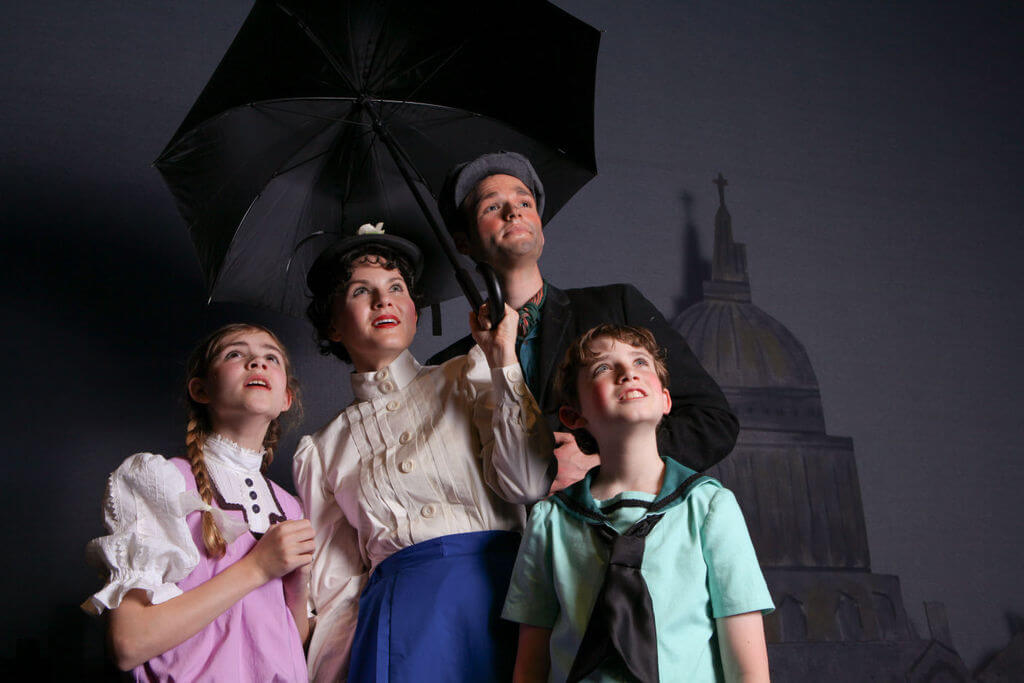 When Artistic Director Matt Gutschick and the rest of the creative team at The Rose Theater choose to tackle Disney and Cameron Mackintosh’s musical Mary Poppins, they knew it would be one of the organization’s most challenging undertakings.

“It was interesting, when we chose to do it, to sort of recognize the fact that it meant we would have to level up some of our production value choices,” Gutschick said. “I have a little bit of a background in doing theatre pieces with magic, with illusions. It was an incredible challenge for us but I think that it was a wonderful, galvanizing moment for us as a theatre to reach for this and actually put something together that is worthy of a lot a pride.”

Based on the timeless books of P.L. Travers and complete with all the beloved songs from the Academy Award-winning Disney film, the stage musical tells the inspirational tale of the amazing flying nanny who’s practically perfect in every way. The Rose’s production includes what Gutschick called a small but talented cast of local performers.

“We decided to do this with a small cast so there are a lot of people in the chorus that double as multiple roles,” he said. “The thought behind that was that if we could find excellent enough voices and dancers, we would be able to maximize their talents across the board. There are people that pop into and out of some of the smaller cameo roles in the show and then rejoin the chorus. What that does, in my opinion, is strengthen the chorus pieces far more than we have been able to do in the past.”

While the many of the songs and subject matter from the classic film remain in the stage production, Gutschick said that the musical medium gives audiences a chance to look farther into the minor characters’ lives. While the film version relied heavily on set pieces and spectacle, the stage production allows for dynamic ensemble dance numbers and unique vocal solos that provide an extra layer of nuance to the story.

“In my opinion, the stage show actually goes far more into character development, particularly when it comes to Mr. and Mrs. Banks,” he said. “It reconstructs Mr. Banks’ songs, which were sort of talk-singy in the movie, into character ballads using the same melodic structures. It’s really fascinating. And then Mrs. Banks, we actually get to know her in a completely different way than we do in the film. The stage show is really about a marriage that is deeply in trouble because Mr. Banks has absolutely lost his ability to listen to Mrs. Banks and she has lost the confidence to speak her mind to him. Both of those things are rediscovered by the end of the piece. Via song, we are actually able to get inside these characters’ heads in a way that the movie is not necessarily concerned with.”

Gutschick said audiences will get a chance to relive some of their favorite moments from the Disney film while finding new favorites in a reimagined story.

“It’s written by Julian Fellowes, who writes Downton Abbey. He really is a master of story structure,” he said. “He understands plot in a way that I think very few writers do. When the actors start getting the opportunity to put that on its feet with the music, with the choreography they’ve been taught, it starts to feel really alive to them. I think this cast, talented that they are, has taken that emotional information and brought the show, at moments, to really transcendent places.”

With a skilled troupe of actors, talented designers, and outstanding crew, Gutschick feels that their production rivals that of any Broadway tour.

The Rose Theater’s production of Disney and Cameron Mackintosh’s Mary Poppins is currently running now through June 28th on their mainstage located on 20th and Farnam St. For more information on the production, visit www.rosetheater.org.