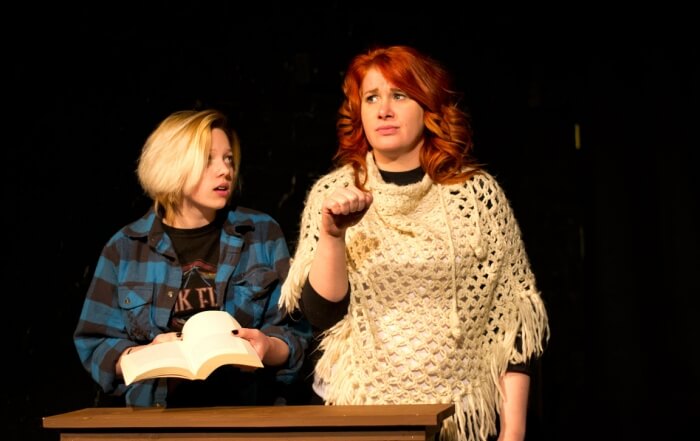 Harbor by Chad Beguelin is currently running through March 29th at SNAP Productions on 33rd and California Street in Omaha. The story chronicles of Donna, her brother Kevin, and their families. Kevin’s seemingly perfect world hits troubled waters when his ne’er-do-well sister, Donna, and her teenage daughter show up unexpectedly at the Sag Harbor home he shares with his husband, Ted. When Donna reveals that she is pregnant and wants Kevin and Ted to adopt the child, lead actress Kaitlyn McClincy says the relationships of all involved are put to the test.

For McClincy, the character of Donna presented an interesting character study. Donna is a free spirit who lives in the moment and cares little of the consequences of her actions, even if they might affect those she’s cares about.

“I guess it’s just Donna coming in and messing everybody’s life up and dragging them down with her. Who goes along with it? These relationships have been in place for a very long time and get in with whirlwind of Donna. This woman finds out she’s pregnant in the bathroom of a Long John Silvers. It’s her saying, ‘Hey! Guess what happened today?’ and everyone reacting to that.”

It’s a story McClincy said reminds her of a film like Little Miss Sunshine. It’s a look into a family that’s stuck with each other, fighting with their dysfunction, but also loving each other at the same time.

“You can see yourself in these characters. I can see elements of myself in Donna and her daughter, even Ted and Kevin. I feel like everybody has a thread of normalcy. I don’t feel like anybody is a total train wreck, even though Donna is set up to be that. I don’t think that she’s as outlandish as some of the other characters I’ve seen this year. You can see what these people would like her.”

SNAP Productions’ run of Harbor will continue through March 29th at their performance space on 33rd and California St. For more information on the show, visit www.snapproductions.com.