Home » Stage » Cold Cream » I and You at the BLUEBARN Theatre Waxes Poetic, Universal Humanism

Body and soul unite when an affinity for Walt Whitman’s poetic musings and two students, Caroline and Anthony, come together to collaborate on an English assignment project against a pressing deadline. The scene is all too familiar with an exchange of colloquialism and awkwardness- a charming boy invites himself in, or rather invades the room of a girl who is awaiting a liver transplant, coaxing her to help him complete the poster on literary work “Leaves of Grass,” in which they’ve been assigned.

At first glance you think you are just seeing a play about English projects, millennial texting and Twitter, poetry, and John Coltrane. That might even seem mundane at first for a 90-minute drama, so typical of the life of teens and the rite of adolescent passage. So deep does this plot go though that your head might be spinning at first, until the metaphorical and the esoteric realm solidify into one.

Like Whitman himself, famed playwright Lauren Gunderson explores the nuances and hidden meanings of the text of the poem, “Song of Myself,” juxtaposing it against the stark background of illness, normalcy, perception, and a cynical reality.

I and You cloaks Caroline’s imminent fear of death shrouded in mystery, Whitman, and post-modern teenage angst. This play draws instinctively from the metaphors and metaphysical transcendence of an ailing character fraught with the foreboding promise of tomorrow. She doesn’t live for much and doesn’t expect things to get much better, even when she meets a charming stranger willing to draw her out of her (turtle) shell. 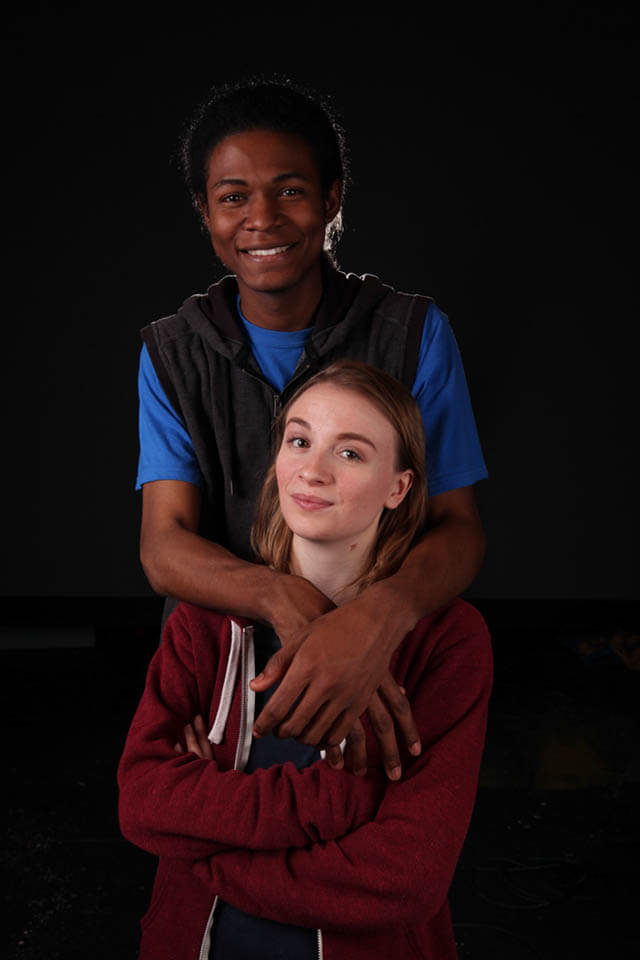 Gunderson, who was awarded the prestigious 2014 Steinberg/ATCA New Play Award for this production, goes on to reveal what is material and what is not through the usage of the abstract and the profound. She paints a collage of intricacies and if you peer closer, you will notice there is much more than surface stuff, or things being taken at face value.

Two talented, experienced and dynamic actors carry this thought-provoking production effortlessly, and their honest expression is what drives the intensity. Anna Jordan as Caroline is powerful, relatable, and gives a sincere, raw performance. The UNO theatre grad has also appeared as Curious George in Curious George & the Golden Meatball, and Adaline Raveaux in Van Gogh & Me at the Rose Theatre, as well as ‘Slippy’ Helen McCormick in The Cripple of Inishmaan at Brigit St. Brigit Theatre.  Jordan Isaac Smith plays Anthony, and most recently was seen as Donkey in Shrek at the Omaha Community Playhouse, as well as in Disney’sNewsies at The Rose Theatre, along with countless other roles in Omaha. His jovial personality shines through a purposely written two-dimensional character, with his portrayal warm and intriguing. I and You was directed by Barry Carman with set design by Martin Scott Marchitto, and lighting design by Josh Mullady. The set is one of the features you notice and is so expertly and intimately crafted to reflect a teenager’s sanctuary.

If you love grammar and literature, you’ll delight in the critical analysis and awareness of pronouns, subtext, and how that all ties in-it makes perfect sense when revisiting the title and just how central it is to the overall theme of the plot. The BLUEBARN Theatre, which has staged other Lauren Gunderson works such as the regional premiere of Silent Sky, nails another production, showcasing the heart of this play. You might do a double take with this one- there just may be more to this drama than what meets the eye.