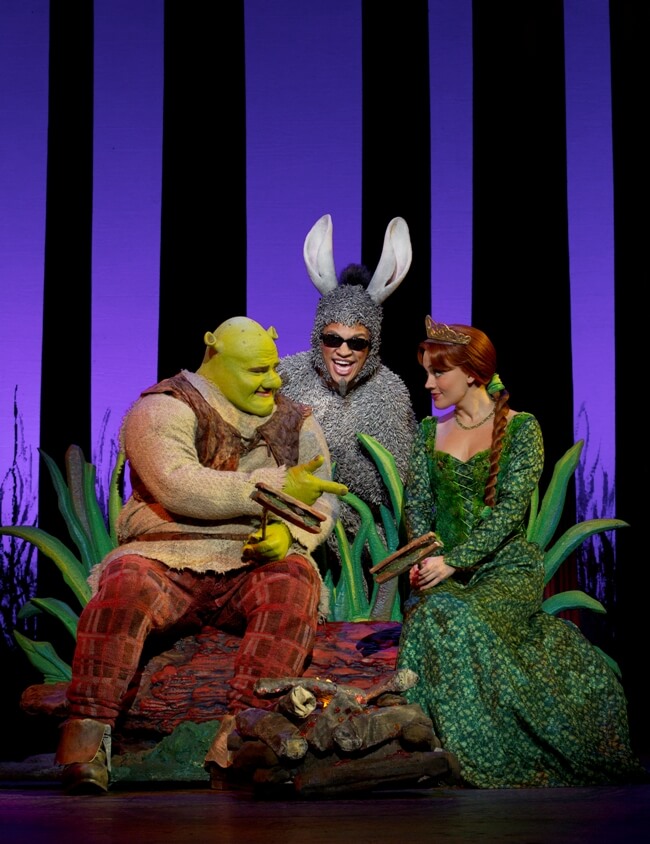 boom with a small b at the Playhouse Thursday? Yes. The Bad Seed with a good cast at the Circle Theatre Friday? Yes. Chanticleer’s fund-raising cabaret in CB Saturday? Yes. A Bright New Boise at the Playhouse Monday? Yes.

Shrek the Musical at the Orpheum Tuesday? “Yes, yes, yes, yes, yes.” The first four affirmatives were mine, but the next five are in quotation marks because they erupted excitedly from my eighth-grade friend Jacob when his mother asked if he wanted to go with us to see the lovable ogre.

I doubt that Jacob much cares that it was written by Pulitzer playwright David Lindsay-Abaire as long as Shrek hangs out with a wise-cracking donkey and wins the heart of the fair Fiona. Or that it runs all the way to Sunday, as long as he gets to see it Tuesday wearing a Shrek t-shirt and ogre ears.

So that makes it exciting to me, too, though the eighth-grader can probably understand that I might get more pumped about new plays that weren’t proceeded by a couple of movies. That goes for the two coming to the Omaha Community Playhouse, and while I watched the Shrek movie with my grandson fairly recently, it has been a few decades since I’ve seen stage or screen versions of the Circle’s chilling story of a scary 8-year-old girl.

Oddly enough, both boom, the play running Oct. 19-Nov. 18 in the Howard Drew Theatre, and A Bright New Boise, the 21 & Over series staged reading only at 7:30 p.m. Monday in the same space, deal with the world ending either in disaster or Rapture.

The former stars Ben Beck as a grad student who hopes to preserve the human race with food running out and the fish acting strange. Amy Lane directs Beck, Amy Schweid and Judy Radcliff.

Lane turned the staged reading over to her assistant, Beth Thompson, who has helped with the 21 & Over series. She also leads a proven cast of Nick Zadina, Noah Diaz, Thomas Gjere, Jennifer McGill and Daena Schweiger, whose name I’ve seen spelled this and many other interesting ways.

The Boise blurb opens with this teaser, “The Rapture may be coming to the employee break room of Hobby Lobby.” And it closes with this puzzler, “A beautiful, funny play about the impossibility of modern faith.”

If modern faith is impossible, should men and women of faith stay home rather than face the possibility that they won’t find this revelation either beautiful or funny?