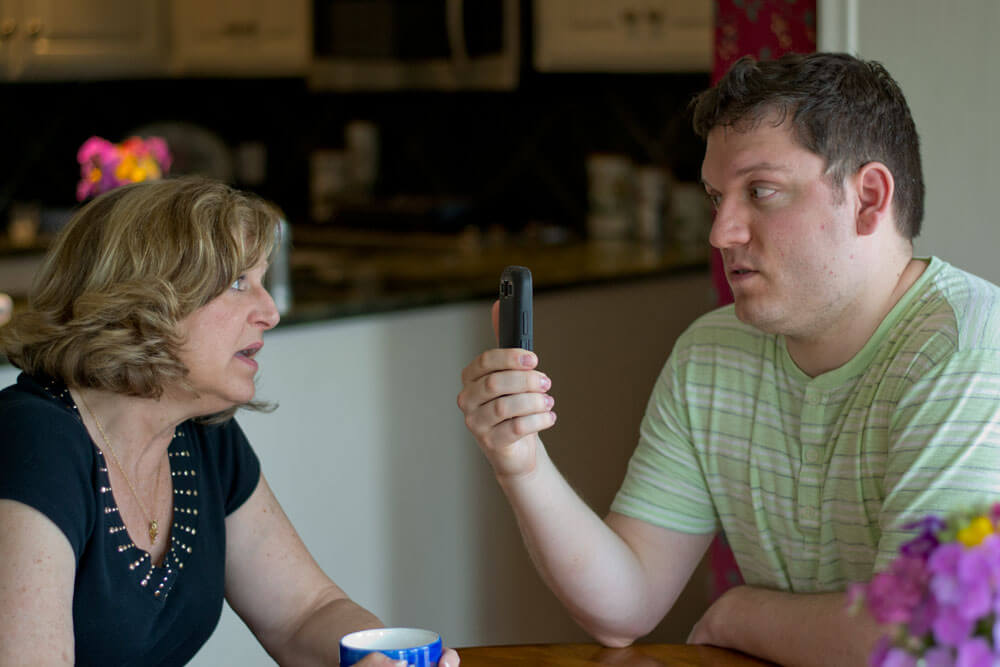 The latest show running at SNAP productions on 33rd and California Street is entitled In the Bones by Cody Daigle.  In it, a young soldier returns home from serving in Afghanistan and ends his own life while grief settles over his family and the partner he leaves behind. In a series of scenes moving ahead a year at a time, loss transforms a family and sorrow finds a home in the bones of those he left behind.

Eric Grant-Leanna plays the troubled soldier Luke, although you probably won’t ever seem him physically on the stage. The only time he appears is in little video-diary flashbacks that play in between scenes. Even though most of his work was prerecorded, Grant-Leanna still attended every rehearsal and a shows up at every performance, just in case a technical snafu knocks out the video. He said it was interesting blending the worlds of stage and film together.

“What was really challenging part is the day right after the readthrough when we started filming stuff,” he said. “Everything we filmed shows up in the final product. It was difficult because I felt a little worried that we didn’t have enough time to explore stuff and maybe make some different choices. We just did it, said ‘O.K.’, and that’s how it is. But, one of the cool things about rehearsing everything to do it live is that we were able to evolve scenes and throw in more and more interesting things.”

During the rehearsal process, the cast spent a lot of their time analyzing the script and discovering the layered and complex dynamics between each family member on stage.

“One of the main things we focused on was trying to get the dynamics of the family relationships down,” he said. “Exploring the reasons why some characters react the way they do. There’s little clues that the playwright, Cody, placed throughout the script. We then have to comb through those and figure out the cause and effect of why things happened.”

Grant-Leanna said that so far, audiences have responded in a myriad of ways to the emotional and impactful show.

“People in the audience, they were really touched by the story,” he said. “It really connected with them. I think just about everybody has some sort of experience dealing with difficult people in their family, different family conflicts. So many people have experienced loss and think this is really realistic way to look at it.”

SNAP Productions latest show, In the Bones by Cody Daigle is currently running now through September 13th. For more information on the show, visit www.SNAPproductions.com.