If you’re a 90’s kid you probably grew up reading the R.L. Stine series ‘Goosebumps’. Or watching the spooky 30-minute Saturday morning version for your weekly freak out. I know I did. The musical stage adaptation (book and lyrics by John Maclay and music and lyrics by Danny Abosch) doesn’t give you all of the mummies, monsters and dummies the books did, but still offers up plenty of things you’ll remember from the series. Goosebumps The Musical: Phantom of the Auditorium, highlights one of the creepier storylines; add catchy music and some stage magic, you’ve got a great night at the theater for the whole family. I’ve been watching the TV series with my four-year-old, who has a penchant for the spooky. And while he was slightly below the suggested age for this show, he did enjoy the special effects, the random phantom appearances and the music, and so did I. 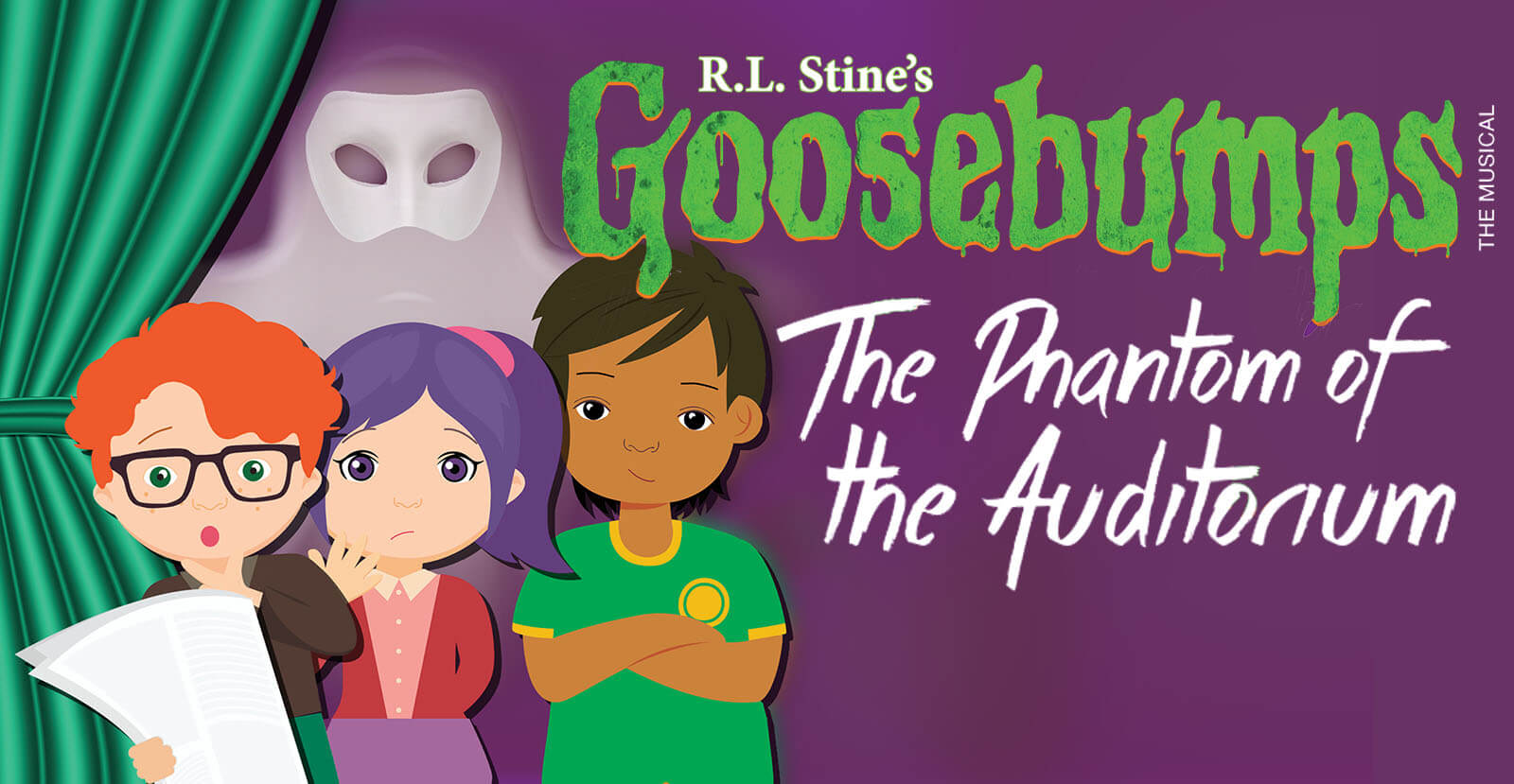 This Goosebumps incarnation takes place behind the scenes of a high school musical production. Brooke (Audrey Saucier) and Zeke (Elliot Kerkhofs) are best friends who always get cast in the leads. Tina (Sophie Williams) has other ideas on who should get the starring role. And Brian (Christian Wintle) is the new kid in town, hoping to be cast at all. The delightful and unique chorus of Olivia Bryant, Annlynn Casey, Carson Bishop and Camden Park are featured in breakout parts throughout the show. The chorus brings laughs and great voices rounding out the cast of the musical which was chosen by Ms. Walker (Ashley Laverty). This particular “Very Scary Play” is based on a show about a Phantom, and has a precarious past in this school, as 70 years ago the original lead was killed before he could take the stage. The script, since then, is said to be haunted and brings the school bad luck to all who try to perform it. This performance is no different as a hidden enemy begins to sabotage it. Brooke and Zeke start to investigate the suspects in hopes to foil the phantom perpetrator and continue the production. The show is full of laughs, scares, a love interest and the friendly competition you’d expect from a musical about high school showbiz. The cast is wonderfully professional and fun to watch; many of them are current Rose students and continue to showcase the excellent talent that comes out of their theater program. Director Suzanne Withem enjoyed working with the young actors.

“Working with this cast of youth artists and professional actors has been an absolute dream. Early in my discussions with Artistic Director, Matt Gutschick, we talked about all the benefits of having an age-appropriate cast. Not only did this decision respond to the Rose’s audiences’ expressed desire to see more kids on stage, but it allowed more youth artists the opportunity to be on stage in a professional production.” The cast of ten only features two adult actors, Laverty and Alphonse Kroeten who frightens as the cantankerous night janitor, Emile. But the show belongs to it’s younger stars.

“The kids are so professional, and yet still bring their own delightful worldview and creativity to the work,” she continues. “Because of the excellent training they’ve received (many are Broadway at The Rose kids and the others do plays at school), they are up for both the hard work and the fun of collaborating. They’ve brought great ideas to the room, and because they live lives similar to their characters – going to school every day, suffering goofy teachers and mean bullies, and experiencing the awkward joy of young love – they’ve been able to bring a sense of realism to the show.”

A highlight for me was the challenging  “Understudy Buddy” performed by Sophie Williams’ Tina. The song is a sugary-sweet-ulterior-motive laced showstopper. Another highlight is “The Legend” which gives us the backstory we need to dive into the mystery, featuring all of the students and Ms. Wilson. The book really does keep you guessing until the end, and as the students go through the potential suspects and motives the enigma only grows until it’s satisfying and magical conclusion.

I would suggest Goosebumps to anyone 7 and up: the show runs nearly an hour and a half and could make younger kids, wiggly. This is also a great show for adults who want a night of theater and to reminisce about how amazing we had it in the 90’s.

Goosebumps achieved: All of them.

Goosebumps runs through November 11th with two shows on Saturday.