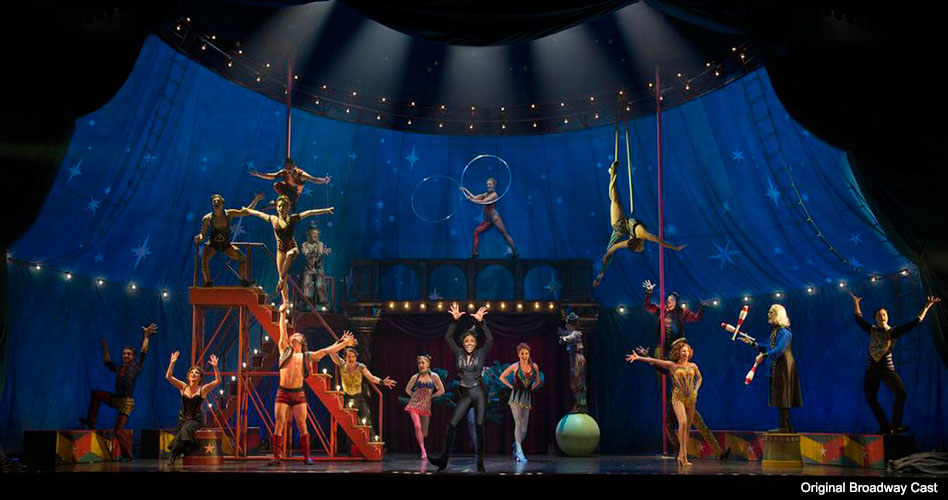 Flying into the Orpheum Theatre through Sunday March 8th is the National Broadway Tour of the revival of Pippin by Stephen Schwartz. Back on the Broadway stage for the first time in 40 years, Pippin tells the story of the oldest son of Charlemagne as he searches for meaning in his existence. Does he choose a happy but simple life or does he risk everything for a small flash of glory?  Under the direction of Tony Award winning director Diane Paulus, the new version of Pippin sees the story told by a traveling circus filled with acrobatic, death defying feats. Sam Lips, the actor who plays Pippin, said there is no shortage of spectacle.

Lips understudied the role of Pippin on Broadway until the show’s closing in January, where he was called up to take the lead in the national tour. He’s accompanied by an eclectic ensemble of both musical theatre veterans (including John Rubenstein, the original 1972 Pippin) and trained circus performers.

“I had no acrobatic training coming into this show. Everything I do in the show, I learned when I joined the company,” Lips said. “A lot of the members of our troupe are trained in circus, so they are very helpful in showing those of us who have to learn these circus skills how exactly to do it and do it safely. A lot of it is just getting over the mental barriers of knowing that you are several feet in the air with no safety cord, you know what I mean? I think that was the biggest challenge, just getting over the mental stuff.”

While Lips performs his fair share of death defying stunts in the show, he’s not without a little stage fright himself.

“The part that scares me the most is in Act Two,” he said. “It’s called a ‘two high’. I stand on a guy’s shoulder and he walks around with me on his shoulders. That was the hardest thing for me because the biggest thing you have to do when you’re up there is relax, you can’t hold yourself stiff or he’ll fall over.”

With its high-flying action, classic score, and loads of tongue-in-cheek comedy, Lips says every aspect of the show will resonate with audiences.

“I think there’s something that everyone can take away from this show,” he said. “Every single person can come see Pippin and be left with some thought-provoking impression from it. Whether it’s from seeing the acrobatics, seeing these death-defying feats that are being done on stage, or whether they are connecting with Pippin’s journey, with his story of finding meaning in his life. I don’t want to give away the end, but maybe what is truly meaningful in life isn’t the extraordinary, death-defying feats. Maybe it’s something a little bit more ordinary. The greatest thing about this show is that everyone can connect to it in some way.

The National Broadway Tour of Pippin will run at the Orpheum Theater through Sunday, March 8th. For more information on the production, visit www.TicketOmaha.com.