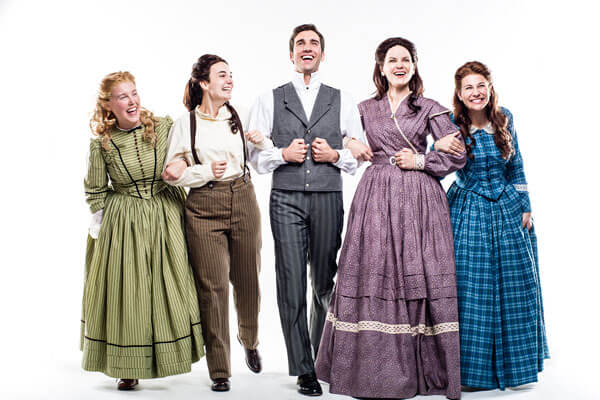 The Omaha Community Playhouse, in partnership with its national touring wing, the Nebraska Theatre Caravan, will open Little Women: The Musical on Friday, January 23rd inside the Howard and Rhonda Hawks Mainstage. After its run completes on February 22nd, the show will be available for theatre houses across the country to pick up as part of a national tour that hopes to run next year. Since packing up and transporting the set is one of the production’s top priorities, the design and staging process was a unique one for director Susie Baer Collins.

“Well, it doesn’t change too much in the rehearsal hall, but it significantly changed how we would build the set,” Collins said. “It has to be able to come apart, fit in a truck, and move into a variety of venues, some of which will have fly systems and some won’t. We had some really interesting parameters to do this play that takes place in 87 different locations.”

After numerous adaptations on stage and screen, the classic story of Little Women by Louisa May Alcott gets new life from Composer Jason Howland, Lyricist Mindi Dickstein, and Writer Allan Knee. Collins said this musical adaptation, first staged in 2005, provides music that both matches the time period and stays true to the conventions of musical theatre.

“The score serves, at times, the time period,” she said. “There are some songs, like when Beth sits down to play her piano, it’s a song you might have heard a young woman play at the time. On the other hand, there’s very serious musical theatre brilliance in this play. The character of Jo March, you follow her emotional life and ambition very musically. By the end of the first act, her song isn’t unlike “Defying Gravity” from Wicked. It has that kind of drive an appeal. I would say that there is a little bit of something for everyone.”

Collins said that anyone will be able to connect with the new imagining of an American classic.

“To me, it’s a very successful adaptation of the telling of this rather epic story,” she said. “It speaks to young women, I think it really appeals to people who have always loved the book. And yet, I think there will be people that discover the story for the first time and maybe get interested enough to read the book or explore more of the time period or the works of Louisa May Alcott. Everybody’s pretty captivated by a story that they may not have heard before. That really pleases me and gets me excited.”

The Omaha Community Playhouse’s production of Little Women: The Musical, in partnership with the Nebraska Theatre Caravan, will run from January 23rd through February 22nd on the Hawks Mainstage Theatre. For more information on the show, visit www.OmahaPlayhouse.com