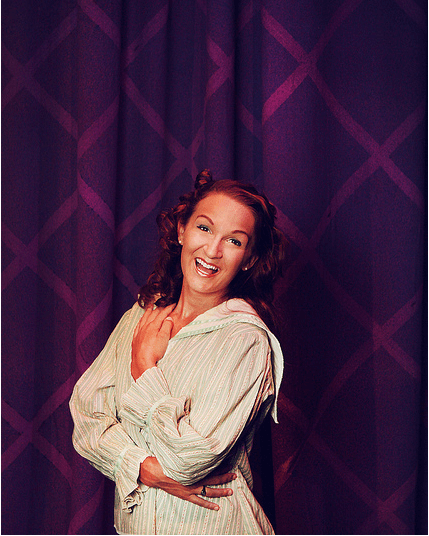 No, you’re not getting an essay contrasting Jerry Longe as artist Mark Rothko in Red with Ariel Talacko as Fanny Brice in Funny Girl. Suffice it to say, viva la difference.

And that’s without making it three for three by catching Shakespeare’s Titus Andronicus the next night, doing back-to-back Blue Barn, Creighton and the University of Nebraska at Omaha.

Instead of flipping a coin to pick between the two collegiate shows, I took the unprofessional option of letting the Barbra Streisand fandom of my wife decide the issue. That, of course, saddled Ariel, Creighton’s Fanny, with the burden of coming convincingly close enough to Barbra’s Brice.

Which she did. One could comfortably root for the talented Talacko even when singing “People” and she topped off a fine performance with a powerful closing treatment of “Don’t Rain on My Parade.”

And guest director Marguerite Bennett, a newcomer from Iowa, gave her a strong supporting cast, especially in Sean Flattery as Nicky Arnstein. Thanks to her old school friend, Jim McKain, she found Sean, who has played such roles in Lincoln as Billy Crocker in Anything Goes, at UNL and got him ready to be Fanny’s gambler in 10 days.

Meanwhile, Red requires a lot more than 10 days of cerebral scrutiny to examine the mind of Mark Rothko, but much less time to evaluate the acting of Jerry Longe and Brendan Reilly as Ken, the artist’s assistant.

They’ll both receive well-deserved recognition when the time comes for post-season awards. But Jerry immediately met the challenge faced by any actor we’ve seen on stage for so many years. He disappeared completely into the demanding role and Reilly became a sympathetic foil for Rothko’s monumental self-absorption.

On one level, the John Logan play poses a near-impossible task for the audience: seeing the art as the artist does, as pulsating, moving targets of tragic meaning, living objects deserving of our kindness and compassion.

Even with advance consideration of the concepts, I found the Apollonian and Dionysian debate between artist and helper less than lucid. What comes through most powerfully is how seriously Rothko takes his work and how much he demands when he asks Ken and the audience, “What do you see?”

Ken’s simple one-word answer sparks a dialogue that reminds of what semanticists tell us about Eskimos and their many words to elaborate the meaning of snow. The color red holds such depth for the artist, who fears his red will eventually be swallowed by black.