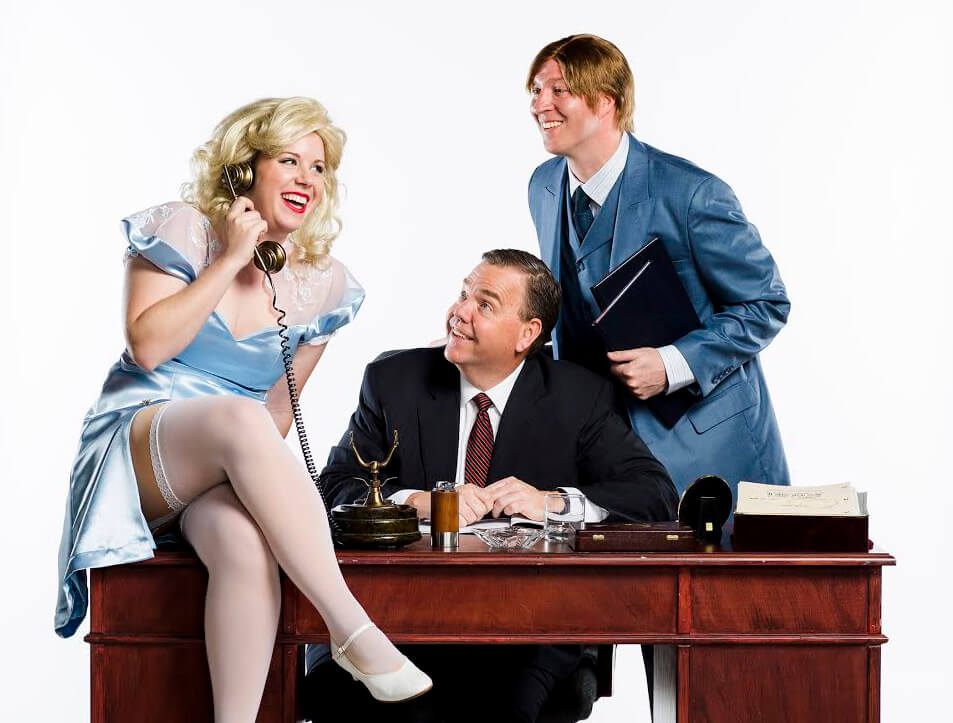 If you liked past stage or film versions of Mel Brooks’ The Producers, you’re likely to love the Omaha Community Playhouse treatment.

If you weren’t that crazy about it before, you’re still likely to love the Playhouse treatment. There’s something special about seeing hometown talents excel in a handsome setting with ultra-professional production values.

And if you’ve never seen this musical about two producers trying to get rich by creating a sure-fire flop, “Springtime for Hitler:  a gay romp with Adolf and Eva in Berchtesgaden,” then you’re apt to rank it the funniest show you’ve seen in a long, long time.

It certainly establishes Jeff Horger, the theater’s associate artistic director, as worthy of the nation’s top community theater. He takes the wild Brooks style well over the top right from the start when we see a sex-starved little old silver-haired lady leap on top of Max Bialystock on his well-worn casting couch.

Jim McKain is great as that cynical producer, fresh off his latest flop, “Hamlet: the Boy.”  He’s eager to seduce more money from his swarm of little old ladies to pursue the next profitable flop by hiding the seed money. That plan comes from an innocent suggestion by his bashful, blanky-hugging accountant, Leo Bloom, played by Steve Krambeck.

They team on a Mel Brooks score full of songs that both parody Broadway clichés yet work when taken semi-seriously. You may not go home singing your favorites, but they always add to the fun.

Just when you think McKain and Krambeck can’t get any better, we get Bialystock singing “Betrayed,” a fast-paced summary of the story up to that point, and then we get Bloom doing “’til Him,” thanking Bialystock for making him a producer.

It helps immeasurably that they’re joined by a sensible Swedish sexpot named Ulla, a curvaceous blonde Lindsey Ussury, and a nutty Nazi, Mike Palmreuter as Franz Liebkind. He’s the author of the ode to Adolf and the keeper of pigeons who wear Nazi helmets and raise their wings in a “Heil, Hitler” salute.

And the most flamboyant character of them all comes from Zach Kloppenberg as Carmen Guia, the “common-law” assistant to the cross-dressing director, Ryan Pivonka’s Roger DeBris. If it was a swishing contest, the audience declared Kloppenberg the winner.

The rest of the motley cast played multiple roles, best exemplified by Don Harris ranging from a bossy accounting exec to a police sergeant, a judge and Winston Churchill. And you won’t overlook Nora Shelton’s bag lady.

You’ll be reminded again what a treasure Omaha has in the scenic and lighting work by Jim Othuse.  Another Playhouse veteran, John Gibilisco, did a sound design that included well-timed off-stage crashes; newcomer Amanda Fehlner costumed Ulla, Franz and the rest memorably, and Melanie Walters provided a full evening of delightful choreography, topped with chorus line antics by the little old ladies and their walkers.

I’m reaching to find fault with something about this show, but everything from the 10 musicians led by Jim Boggess to the ensemble works so well. Well, okay, as a kid growing up during World War II even the spoofiest treatment by the great Mel Brooks doesn’t completely overcome my tendency to cringe at the sight of swastikas.